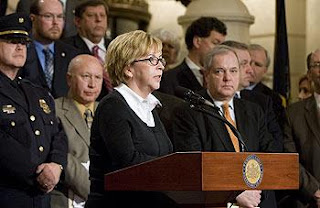 Capitol Ideas' John Micek does it again. Last week, he told us the Lehigh Valley delegation to the state house and senate had turned down their cost of living adjustments. The very next day, state reps. Craig Dally and Rich Grucela announced they were giving that money to Northampton County's Children & Youth.
Now, John tells us that another local state rep., moderate Republican Karen Beyer, is considering a run for lieutenant governor. Other possible candidates include western Pa.'s Rep. Mike Turzai and Sen. John Pippy and Montgomery County Commissioner Bruce Castor.

What kills me about this is that Beyer has only served two years in state office. If she embarks on this quixotic quest now against better-funded candidates, she will certainly be shortchanging Allentown and other residents in her district for at least her entire final year in office. And will she pull a Jennifer Mann and run for two incompatible offices simultaneously, hedging her bets? If she does, she deserves to lose both elections.

Actually, Rep. Beyer was first elected in July 2005 (special election to replace Pat Browne when he moved to the state senate). That gives her 3 1/2 years in office. Still not much, but better than just 2 years. Her resume is awfully thin, but when has that ever stopped anyone from running for office?

Thank you for the correction, Alan, and I agree that she should postpone these plans.

Bernie, I'm going to take the other side - she's served 3 1/2 years as a State Rep. so far, and will have served almost 5 years before the election season for Lt. Governor kicks off. I think that's sufficient experience.

I also believe that no politician should be able to run for two offices simultaneously.

to know Karen is to know that she has ambition for higher office. If Pat Browne ever retires, Karen would stake a claim to that position. If Charlie Dent ever moves on, expect Karen to run for Congress.

The major obstacle that she'll always face is that in her two contests with Linda Minger, the fundraising was largely done for her by Harrisburg types. Not sure if she could do it without their help.

I love that the pic shows her with Perzel at her side. Pretty much says it all for me.

on the upside, we do have representation that is rather close to the people. on the downside, there is not enough "UP" for these legislators to aspire to, thus we have them chasing after office after office. and what complicates the situation even further is that the abilities you need to serve in the state legislature have very little value in the private sector making most state representatives virtually unemployable at their current salary level in the private economy.

but think about it; how many private sector jobs have as a major requirement the ability to ingest huge quantities of ring bologna and cheese?

Karen Beyer is not a personal favorite: She's way too long on ambition and too short on intellect. This run for Lt. Gov. makes her look foolish and unconnected to reality.

But whether you agree with that assessment or not, she doesn't have a prayer. Why? Because Elmer Gates and his conservative male king-maker compadres will not only refuse to give her any money, they'll funnel it all to some competitor...even a Democrat. (See the Don Cunningham & Jane Ervin County Exec. race as example.) They've been trying to knock her out of that seat since she shocked everyone by winning it.

As a moderate female Republican, Beyer has about a zero chance of becoming the Lt. Gov candidate...even she did have personality, charisma, and some real knowledge of the issues. Since she doesn't have any of those things, she's toast.

Am I the only one who thinks it is ironic that the last woman to hold this seat also named Karen ran for Lt. Governor and was crushed in the primary? Also, I think it is unfair to her district that she leaking this to the press before she is even sworn in for her third term. Her office costs the taxpayers around $300,000 per year between her salary, per diems, staff (which is currently the largest of any rep in the valley) and other costs. That is a lot of money to pay her to run for another office. There is a big difference between this crackpot idea, and Jenn Mann, Don Cunningham, or Pat Toomey running for office. At least the three of them have long records to fall back on. What has Karen accomplished? To my knowledge the only bill she has really fought for was to try to limit school choice. Let her run then the valley will be rid of her and maybe we can get a real elected official in that seat.

Anon 12:12, I generally agree with you except for Jenn Mann. She ran for two incompatible offices simultaneously. She has also run for 3 different offices over the last 4 years.

In Cunningham or Toomey's case, both have established records. Whether you like thewir policies, they are experienced.

Your comments remind me of the Jane Baker lawsuit, where she claimed that the injuries from her accident prevented her from holding any job except state legislator. A ringing indictment, if ever there was one!

Why vote for a RINO like Beyer when there are plenty of Ds with realistic chances from which to choose?

Wasn't she on a school board for awhile? Three and a half years in a statewide office...heck she is almost ready to run for VP.

I do not know much about her, but if she or anyone has the ambition, I say go for it. I'll take a do'er over any windbag. If there is a pool of candidates, we may hear a little more discussion on the issues. I'd like to see all the LV candidates mentioned in the running.

BTW, didn't we have a football player run for Govenor?

Karen Beyer was elected to the Saucon Valley school board in November 2003, and she served from December 2003 until she won her seat in the House. I believe she was the board president during her entire time on the school board.

Only New Hampshire has more legislators - 424. They make a minimal amount - something like $100 a year. And they meet for a very short duration.

PA has the second highest paid legislators - average $76,000 a year.

PA has the second highest amount of staffers after New York. Our legislature averages 11 staffers per legislator.

I posted about this at: