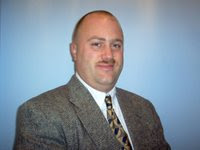 Republican Mark Schwartz lost last year to Northampton County Council member Lamont McClure by a scant 91 votes. He was endorsed by both local papers. Amazingly, he spent no money. He had no time. He was working five different jobs - East Allen Township supervisor (third term), state police dispatcher, an EMT with two different ambulance corps, and a corpsman in the Navy Reserve.
He's already declared he's running again next year and has submitted a letter and resume expressing an interest in Wayne Grube's vacancy. It looks like his Navy Reserve enlistment has expired and he has dropped one ambulance corps, so he should have a little more time on his hands.

Someone has anonymously suggested that Schwartz' candidacy might constitute a violation of the Hatch Act, but that's ridiculous. That federal act does bar state employees from seeking election, but only those who are principally employed in connection with programs financed by loans or grants made by the United States or a federal agency. Last time I checked, state police dispatchers are paid out of the state coffers.
Posted by Bernie O'Hare at 12/02/2008 12:04:00 AM