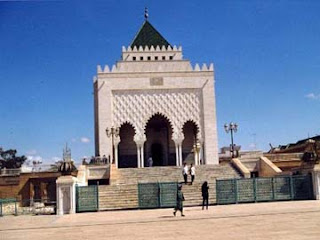 Yesterday, I received a very nice email from an inspirational Konkrete Kid, a young lady who attends Northampton High School and actually reads this blog. Her name is Sarah, but I'll leave her surname off this post. Let me tell you her story.

When I was 16 years old, I spent most of my waking hours trying to figure out how to steal booze from my parents without getting caught. But Sarah tells me, at age 16, that she's interested in international politics. Last year, she soaked up the atmosphere in London and France. This summer, she's planning a trip to Morocco so she can learn Arabic. One of her teachers, who is of Lebanese descent, has already given her some home instruction. Now, she will go to Rabat and undergo an "immersion" program in Arabic.
She's started a blog called Preparing for Morocco, where she goes by the name "Travlingirl." The cost of this trip is about $4,000. Her parents are helping out and she waitresses as well. Arabic is considered a "critical need language" by our State Department, but there is little money available to fund Americans willing to spend the time and energy for such a daunting task, especially when they're still in high school. This January, Sarah and her parents will do a fundraiser at a local restaurant.

She also has questions. What kind of clothing should she wear? What international cell phone would you recommend?

Beats me. Since most of my trips go no farther than Allentown, I have no answers. But some of you can answer her. I'll help by attending her January fundraiser when she announces it on her blog. I'll announce it here, too. I'd like to meet this amazing person and congratulate her parents.

We constantly hear that young people have no interest in anything but themselves and the newspapers will all fail, blah, blah, blah. Then a 16 year-old girl sends me an email indicating she reads blogs, newspapers and is going to Morocco next summer to learn Arabic. There's hope for us yet.
Posted by Bernie O'Hare at 12/19/2008 12:00:00 AM

My roommate did a language immersion in Morocco and Egypt during high school, she probably has a lot of answers! I will ask her.

Wow, I'm sure she'd appreciate that. I think bikinis are out.

not for you o'hare. ron is bringing back one from his vacation just for you.

She should be fine wearing her normal Western clothing, although it's best to avoid shorts, short skirts, and showing shoulders, midriff and back.

If she's bringing a laptop, she could get Magic Jack for keeping in touch with family and friends by phone. Much cheaper than international cell phone plan. The school might already have a phone line to the States for students to use, so she should check first.

I do alot of fundraisers and would be happy to asist she and her family with any fundraising ideas and some of my contacts. I will also try to assist by spreading the word about her vision and plans in my e-newsletter, Lehigh Valley Flavor and future projects. I am really inspired by her dedication and willingness to EARN what she wants.