Resident to Lower Saucon Township: "Don't Fence Me In!" 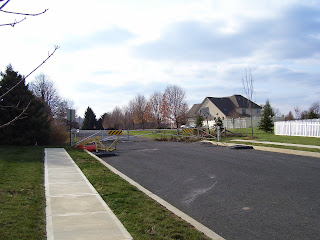 Lower Saucon Township resident Richard Jacobs has challenged the township's decision to create a municipally subsidized gated community. Without bothering to conduct a traffic study, the township has gated off Stover Road from his subdivision.

Blocking off the road makes it much more difficult for people using the main drag, Route 412, to access his neighborhood, the Arden subdivision. Residents of this wealthy quarter, including a township supervisor, are all for this obstruction. You see, they don't like the idea of unwanted guests barrelling through their green zone. They might be poor people, damn it!
Jacobs had previously warned township officials that blocking this road creates a public safety hazard. And soon after the gate was installed, Jacobs had the unhappy fortune to be proved correct. His wife had a nasty fall and he called for assistance. Had that road been open, an ambulance would have been at his wife's side at least five minutes earlier.

This gate, installed at township expense, does more than keep the poor people out. It also screws handicapped people, making it impossible for a person on a wheel chair to get around.

Ten years ago, there were at least thirty thousand gated communities across America, and anywhere between 4 and 8 million people had "forted up." By contrast, Canada has about 300. They're more relaxed ... and less snobby.

Undeniably, gated communities present challenges for emergency vehicles. They exclude our new "untouchables," like the "bus people" I occasionally see derided on this and other blogs. According to at least one study, non-whites make up only a tiny portion of gated community residents. Hmmm. Heavy Trash, another blog, notes that "gated communities do not increase people’s trust in each other or the overall quality of life. They may in fact do harm to both.”

The Great Wall of China never succeeded in keeping out invaders. The Berlin Wall was a bad idea, too. The Stover Road gate will likely be opened by Jacobs' litigation. For those of you who'd like more detail, his complaint is below.

NOW COMES THE PLAINTIFF upon a cause of action of which the following are statements:

3. Plaintiff resides in the Arden Subdivision, at the corner of Arden Lane and Stover Road.

4. Stover Road is located on the approved plans of the Arden Subdivision and is a public road.

7. Appearing on the recorded plan of the Meadows is the following notation relative to a possible gate located on Stover Road at the point where the Meadows Subdivision and the Arden Subdivision meet. “The location and type of gate will be determined by the Lower Saucon Township Council if deemed necessary after Stover Road is constructed.”

8. The gate as set forth in paragraph number seven would prevent the free flow of traffic along Stover Road from the Arden Subdivision to the Meadows Subdivision and points north and east.

9. Prior to the adoption of the Meadows Subdivision Stover Road was always planned as an open, unobstructed roadway along its entire length.

11. The Lower Sacuon Township Planning Commission considered the requests of the residents and on March 13, 2000 voted to grant preliminary approval of the Meadows Subdivision and specifically voted “to recommend a through road connecting Stover Road without an emergency access gate”.

12. In September 2008 The Lower Sacuon Township Council voted to require a gate be placed in the center of Stover Road preventing the free flow of traffic along its entire length.

13. The placing of the gate in the center of Stover Road was contrary to the specific recommendations and desires of fire, medical and other first responders of emergencies that may be required to travel along Stover Road to access the Arden Subdivision and the residents who live to the south and west of the gate. The Defendant was warned of possible adverse consequences to the public if the Stover Road was blocked by such a gate in a letter dated February 1, 2000, a copy is attached hereto as Exhibit A.

14. The placing of the gate in the center of Stover road will prevent police vehicles responding to emergencies in a timely fashion if they are required to use Stover Road.

15. The residents on the Arden Subdivision and other residents who live to the south of the gate on Stover Road will have only one method of egress and ingress to their homes if Stover Road is blocked by the proposed gate.

16. The placing of the gate in the center of Stover Road is a clear danger to the health, safety and welfare of the public.

17. The placing of the gate in the center of Stover Road is contrary to the Lower Saucon Township Subdivision and Land Development Ordinance.

18. Defendant has not adopted any regulations or standards as part of its Municipal Code to determine the placing of, use of, or construction of gates placed on public roads or streets such as the one on Stover Road and is done on an ad hoc basis.

19. By placing a gate in the center of Stover Road prior to the completion of construction of Stover Road, Plaintiff will be and is unable to complete a traffic study by counting the cars which will traverse Stover Road and its connecting road, Old Mill Road, to adequately assess the impact on any increase in traffic if Stover Road was unobstructed.

Mr. O'Hare, Excellent job of beating the paid pros at the Morning Call to this story. Since the street is still public, my idea is to get a bunch of people from Allentown or Bethlehem to go down there periodically, park their cars and walk around Stover Road in a show of civil disobedience. Lets thumb our noses at the pompous snobs, especially the supervisor.

The gated communities in the Poconos are heavily low income minority. With the most imafmous being PCP (a Pocono Country Place) in Tobyhanna.

It is the very same community that I warned could have election fraud with their polling place moved less than 40 days before the election. Also the election day report I did all those interviewed lived there.

They keep political canvassers out. This way if someone wants to campaign against the right wing folks the republican President of the community supports, viola! No pesky opponents to hear from.

They banned Curtis Slewah and the Gurdian Angles from meeting with residents. And he is a Republican. Thats how much of a dictator Karen White (Head of PCP)is.

It looks like the Township has erected a barrier across a public street, more than creating a gated community. Some elitist, whiny, soccer moms probably thought through traffic was driving too fast and endangering their precious children (who sit inside the McMansion all day playing video games and watching TV).

Anon 7:55, Yes, it's not a true gated community. For one thing, it is municipally subsidized. For another, the public can still access the development, but it takes longer from the main drag. The idea is to keep people away.

I never quite understood the need for gated communities in an already rural area like Monroe County.

I lived in the Poconos for a few years - in three different communities - once in a gated community. They are nothing more than (1) a hassle, preventing the flow of traffic and easy visitation, and (2) a way for developments to create their own security (i.e. police) to impose ridiculous fines and enforce crazy rules.

If the street is public, is it legal to have a gate installed in the middle of it, preventing the flow of traffic?

According to Richard, the way this has been done violates PennDot regulations for what are called "traffic calming devices."