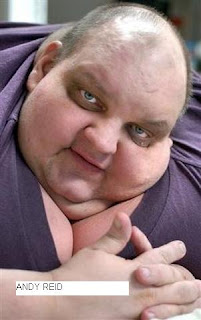 For the seventh time in the last ten years, much maligned Andy Reid has led the Philadelphia Eagles to the playoffs. In a stunning 44-6 thumping of the Dallas Cowboys - most of whose players are felons in the off season - Reid, QB Donovan McNabb and defensive leader Brian Dawkins did more than gain an unlikely playoff berth. They answered their many critics, most of whom never played the game, in the most effective way possible - on the field.

Congrats from an avid Giants fan. Great to see the Cowboys go down in flames! Good luck against the Vikings next week.

Joe Buck is an ASSHOLE and thanks for letting me say that here Bernie.

If you recall duing the game when the birds were up 41-3 late in the 3rd qtr, he says something like the game is not over and the eagles are not in the playoffs yet. What an ASSHOLE.

He said that same stupid shit all during his coverage of our World Fucking Champions Phillies too...

I agree completely. What's even worse is that I was worried he might be right.

My uncle from North Carolina is visiting my parents. We typically get to watch one game with him a year and it is always fun. This was perhaps the loudest my parents' house got in years. Screaming, yelling, dog barking and everything.

Watching teh scores throughout the day was like watching all the elements of a good plan come into play. It was a fun day to be an Eagles fan.

How about dem Cowboys?!

By the way, how can the Panthers be in the NFC South division and the Cowboys be in the NFC East division? Doesn't anybody in the NFL take geography in grade school?

Joe Buck is, and always has been, a disaster.

How'd you get my baby picture?

I was hoping for another tie... that would have confused the hell out of them! Again!

Hell, I thought Bernie had finally updated his Profile Picture

From a legal standpoint, Andy Reid's kids make the Cowboys look like Girl Scouts. It's a good thing the dirty birds made the postseason. Reid should have something to show for all the time he should have been parenting - instead of unleashing his miscreant offspring on the rest of us. Now that they're guests of the Commonwealth, Andy can prepare for another short post-season, untethered by the creeps he created (although I heard they knew regular season games can end in ties). Fly Eagles. Fly.

I still can't believe the Eagles yesterday were the same team that laid that turd on the field vs. the Redskins last week. But what the hell, we're in the playoffs! Fly Eagles Fly!