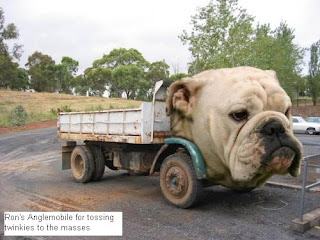 Even when he's fishin' in Florida, the Northampton County Bulldog remains controversial. He tells me he's hauling in fish after fish using his new Dertinger plug and McClure fly. He has publicly denied an interest in the county executive position, but Ron Angle remains the biggest fear of many Democrats and Republicans. That was very apparent in yesterday's comments, when I noted the whispers about Lamont McClure's interest in John Stoffa's job.
"[T]he secret Ohare is hiding is Ron is getting ready for another run for Exec. Ohare wants to get everyone else out so when he announces Ron is running again he can beat up all the others. I only hope Ron is paying to be the communication guy for his campaign."

Here's what I know. Angle has publicly denied being interested in the job. I've seen him suggest it casually to some people, including John Stoffa. Amazingly, Stoffa answered, "You should run. A lot of people should run."

With that kind of answer from the incumbent, Ron probably won't. How the hell do you run against a guy like that?

I support Stoffa. He represents integrity, open and accountable government, a renunciation of pay to play. His "meatloaf" cabinet has quietly worked hard at getting things done. John Conklin, often maligned, is an excellent operations manager who rescued the elections office when it was teetering on the brink of disaster. Public Works Director Steve DeSalva, although he came on board late, snapped the whip on completing the courthouse expansion. Ross Marcus, a very knowledgeable and well-prepared Director of Human Services, will candidly admit shortcomings in his own office.

Stoffa's cabinet regularly attends council meetings, often to be abused by mean-spirited council members. Their attendance demonstrates the executive's respect for council, but there is no reciprocity. Council actions have often been childlike and petty.

Stoffa has made his share of mistakes, sometimes blowing off appointments with council members and needlessly alienating deputy sheriffs. But one criticism, that Stoffa is too indecisive, is unfair. Council is always in a rush to "do something," while Stoffa recognizes the people have to pay for whatever they do.

Pay to play Reibman allies will support Ron Heckman. DA John Morganelli will back McClure. Unions, disaffected employees and Boscola will be behind McHale. All John Stoffa has are the people. That's why he'll win. I think the Bulldog will be in Stoffa's corner.
Posted by Bernie O'Hare at 12/18/2008 12:30:00 AM

O'Hare, I don't know you but you sound like a skunk. I worked for the County for many years and even worked with Ron Heckman in the 70's. I was told how you have maligned his character over and over again. As I am visiting some family I feel oblifgated to say something.

Ron was always a passionate and concerned caseworker who just happened to have a sense of humor. That is something many Human Service folks think means you are not serious. Yet I never met anyone who cared more about the fate of average and down on their luck people like Ron.

He poped the ballons of some self-righteous windbags and that did get him some grief as Director, a job he was most well suited for.
He loves the County and all aspects of County Government.
I helped him in one of his races and if he is a 'pay to play ' candidate someone forgot to pay. He was always behind other candidates in contributions because he wouldn't deal.

What is your proof he is a pay to play cnadidate, because he is a friend of Glenn Reibman? I once asked him about all that and he said while he understands why some want to throw Reibman under a bus, he doesn't believe in turning on his friends just because the mob wants him to.

You should only hope to have half the intelligence and integrity of Ron. If he should run for Executive he will probably once again have the smallest warchest because he does not want to be beholding to anyone but the residents.

I felt as someone who actually knows Ron, I had to counter your aspersions on his character. They are completely without merit and he is the ethical equal of anyone you have mentioned. Please get your facts straight and if you want to find out the truth talk to him, I don't know of anyone he ever turned away including any and all employees that approached him as both a Councilman and a Director.
I may be out of the area but if he runs, I wish him all the best.

I hope Angler is payin' for all of that bait and tackle down there in Fla. I hear they aren't as forgiving a Jersye.

After catching the last couple of minutes of you, Angle and Stoffa on RCN4 the other night, I came away with a need to cooperate at meetings by all.

Should Ron run and win (doubtful), my take is even more hostility among council as Ron seems to be the pig headed stubborn farmer that is in his blood...

"What is your proof he is a pay to play cnadidate, because he is a friend of Glenn Reibman?"

What's he doing now, anyway? Is he still working for LC? Why can't I find his name anywhere?

"After catching the last couple of minutes of you, Angle and Stoffa on RCN4 the other night,"

Angle running for Exec would be a dream for Dems. He has about as much chance getting elected county wide as my pet goldfish. Actually I take that back. My goldfish would have a better shot. As far as Heckman goes he has been friends with glenn reibman for a very long time. Why would Reibman donate to anyone else but his friend. To tie that to pay to play is extraordinarily weak. Just because you like Stoffa, and he is a very nice guy, it doesn't mean you have to tear down the other candidates. Heckman pulls very well county wide and unless he and Mchale both run and split Bethlehem
he could definitely give Stoffa a good run.

Bernie O'hare, Character Assassin, strikes again. It's what he does. It's all he can do, tear down others.


Must be a SKUNK!

"Ron seems to be the pig headed stubborn farmer that is in his blood..."

Is that nice? I don't think Heckman weould apprciate being talked about like that.

"while he understands why some want to throw Reibman under a bus, he doesn't believe in turning on his friends just because the mob wants him to."

Actually, the mob is what worries me. Heckman is a great guy and I really admire him, but I have no regard for the people who are surrounding him, as evidenced by some of the anonymous comments posted here.

That's NOT Ropn Heckman, but that's who is behind him, and that worries me.

"Ron seems to be the pig headed stubborn farmer that is in his blood..."

I meant that as a compliment and if the county was what it was when it truly was rural, then Ron would rule the land!!!

How can a guy who was charged with fleeing the police in New Jersey after stealing a paint brush get elected Northampton County Exec. ?

Maybe because the charges were just that - charges. Ron was never convicted of anything beyond reckless driving.

I think it's time to come out with some new material to bash him with. We all know all the stories floating out there about Ron. They are posted over and over here and at mcall and in anonymous robocalls. It is mostly bullshit.

He has extremely high negatives, but some people who hate him will still vote for him. He's a prick, but he's their prick.

Having said that, I don't think Ron will run against Stoffa. And he's insane to put himself through the barrage of hate that will inevitably follow an announcement.

You hit it on the head. He would be insane to put himself through that, but you see he is counting on Stoffa being taken out in the Primary. But what would be hilarious is a Grucela Angle General Election match-up. It would approach 70 -30. It would be great, and maybe Angle would finally crawl in a whole. . .

Bernie -- unfortunately, everyone in an elected council position and the Executive are simply not the best and brightest this County has to offer. A total sweep is needed ala Lower Macungie Township. The word is that there are grass roots movements being formed like that in Lower Macungie planning to sweep all of these people out. Not one of those mentioned for County Executive have the credibility and experience for the job at hand. Many of us out in the County watching this debacle of unqualified persons running our wonderfull county unfold are simply fed up and tired. It would be great if both parties would start of a search of successfull Township or School District leaders to step forward and run for council or executive.

where do I apply?

Fresh urinal cakes in all the mens rooms.

No more $0.25 charge for female napkins in the ladies rooms.

And free oral favors in the recorder of deeds office.

You have my vote.

The blame should also be shared by the MSM that clamored for Patti Grube to be put on Council. It was just another story for them and a way to maybe shortcircuit any County Council independence.

Of course this blog ran with it because Angle wanted it so he could play puppeter again.

No one thought about a woman who had just lost her husband and had not had a chance to grieve. Of course her judgement may have been foggy. Too bad both Morning Call and Express Times wanted their pound of flesh. To the point of bugging the poor lady at ther husbands grave site. Was that by the not so classy Sara Cassi?

Jackels, the bunch of you.

HOW TRUE!
BOH is the biggest Angle/Stoffa supporter since Adolph Hitler went Aryan. Can you say, Ron Angle removed from WAEB?

The MSM was very sympathetic to Ms. Grube. The ET, in particular, had a number of very touching stories from the people who Grube touched oiver the years. Moreover, the ET called Mrs. Grube just once about her interest, and it was after the funeral. I have not spoken to the MC reporter. I believe she was the ideal replacement. She, more than anyone else, knew her husband's mind. She is a Democrat. She had no interest in running for the job. She is obviously a very bright person. She was willing to serve.

Unfortunately for all of us, it was too much for her. But she clearly was the person who deserved first shot at this, as evidenced by the unanimous vote in her favor.

What you are doing is spinning and are somehow trying, ridiculously, to claim some anti-Semitism. What, was Mrs. Grube a member of Hitler Juden or something? Get real.

a successful Township or School District official --Isn't that an oxymoron.

Township official- We provide no services means we have no taxes, yeah that will work with all the County must do.

School District official --Just what we need, pay 3X what we now pay for County taxes so we can be like the bloated overpaid and underperforming school districts.

As incompetent as he is, better Stoffa stay in office.

The County needs Rich Grucela --- he is the one legislator that I believe can step in and make a good administrator. Contrary to popular belief legislators don't make good governors, presidents or even mayors -- need I say Roy Afflerbach? He ruined our city. But I believe Rich could really do a great job for Northamptoin county.