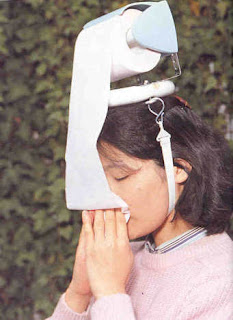 I woke up, late, with a pretty bad cold today. Instead of talking, I'm croaking. Instead of bloggin,' I've been cloggin.' I've already gone through two rolls of toilet paper.

As my fans like to tell you, on a damn near daily basis, I'm a drunk. It's been decades since I retired as champion, but it's true. Usually, it's no big deal. But if you have a cold and you're a boozehound on the wagon like me, you're in for it. They might as well shoot us and put us out of our misery. You see, most cold medicines are out. They're laced with alcohol. That's against the rules. I have to avoid them. For that, I am occasionally rewarded with bronchitis or pneumonia.
I can take Robitussin. No booze. Last night, I stopped by the pharmacy for a six-pack. The barkeep tried to charge me $2 more per bottle because I did not have my CVS card. Not a very good idea to try that on a sick blogger. I immediately blamed drug stores for the recession and loudly claimed he would not treat me that way if I was the Big Three. He quickly used his own damn card, which is what he should have done in the first place. Bastard.

When I got home, I gulped down half a bottle immediately. But I forgot I have to be careful about what kind I get. Some contain antihistamines, and they knock me out. I just got up from a 3 1/2 hour nap, so as you may have guessed, I got the wrong kind. Unfortunately, I gulped down another half bottle before pulling out my magnifying glass to read the bottle's ingredients. It's laced with "chlorpheniramine maleate." Right next to those words is this - "antihistamine."

That's against the rules, too. Mind-altering substances must be avoided at all costs, they say. So far, aside from being tired, the only adverse effect is some giant troll who posts my address everywhere and tells me to bolt my doors 24/7. That's probably just my imagination.

Right now, I'm swilling hot coffee. Black. Sumatra. Caffeine is my savior. Years of stimulants will counteract years of a depressant, I guess. For some reason, that's not against the rules.

One or two teaspoons of fresh horseradish. At least for a moment, your nostrils will be open and you'll forget about your cold.

I second Mucinex, I use it and it works well. Salt water sprayed in your nose helps too.

chicken noodle soup....must be homemade....i don't know what it does....but it tastes good and always made me fel better. my mother called it jewish penicilliun

Bernie
Zicam. Nasal swab. It maybe to late because you are suppose to use it when you feel the cold coming on. Mrs. Miller brought some home. It works. And the beauty of it for you is that it is recommended by Rush Limbaugh. Also, good old fashion Vicks chest rub, don't use that as a pick up line it doesn't work, and early to bed.

Bernie
Zicam. Nasal swab. It maybe to late because you are suppose to use it when you feel the cold coming on. Mrs. Miller brought some home. It works. And the beauty of it for you is that it is recommended by Rush Limbaugh. Also, good old fashion Vicks chest rub, don't use that as a pick up line it doesn't work, and early to bed.

How about trying frequent confession and communion? It keeps me straight.

Is that the real Father Alex?

OK, I tried the horseradish. Last night's dinner came up almost immediately. Thanks for that.

Homemade chicken noodle soup sounds great but I don't cook anything that takes more than 30 seconds.

Frequesnt confession? I have to wait until you're "official" Alex. It will take too long with anyone else.

Nasal swabs? I stick nothing in any of my bodily orifices except my mouth. Those rumours about me and that gerbil are completely untrue, Chris.

Musinex? I'll try that. I am sallying forth and will stop at the store for some.

Zicam makes swabs (which I use), oral sprays, chewable tabs and more. Mucinex makes certain that you cough and don't develop a chest infection. I'm asthmatic and use both to fight off the same problems you described. I had a cold about two weeks ago that I fought off in 5 days. Before I started using those products every cold would turn into a major production. I haven't had a problem since I've started that regime.

And for goodness sake, sleep.

I read somewhere that you should rub the Vicks on the bottom of your feet.

anonymous 1:45PM
Mrs. Miller agrees with you. She has her medical degree from WDU, Witch Doctor University.

Bernie
I never heard about the gerbil. The swabs do work

I got pneumonia, you got off easy.

I thought you weren't allowing threatening behavior on this site. I got the tastykake man, dressed as a Quaker, calling me a dried up Karl Marx. Isn't that slander? What's next?

Actually, it's a picture of a now deceased French priest, Abbe Pierre. He was huge during the war.He gave persecuted Jews safe passage to Switzerland. And, he started an organization for hospitality towards the "garbage" people of France. He provided care for the homeless, sick, mentally ill, and etc. It was called Emmaus and travelled throughout the world.

He got a bad deal at the end. But his legacy and the emphasis of his movement lives on with "young" student priests.

Peace be with all of you during this holiday season. May your holidays be fruitful, safe, and joyful for you and all of your loved ones. ~~Alex J.

Musinex is a Godsend, I must say.

Just remember, in case you haven't already, to thank HIM, for the Mucinex.

Fr. Alex, Thanks for reminding me. I'll thank him for the frickin' cold, too!!!!

On second thought - no soup for you!

That's why you need to hear my confession, the abbreviated version.