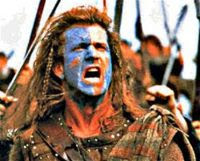 William Wallace is the stubborn Scotsman who gave Edward Longshanks fits over revolutionary ideas like independence. But Wallace lost his head - literally. The William Wallace seeking an appointment to Northampton County Council teaches middle school, so he's probably seen his share of battles, too. And like his namesake, his letter to Northampton County Council demonstrates chivalry. "Please understand, that if it is the wish of Council to also consider Patricia Grube, widow of councilman Grube, that my submission be rescinded, due to the immense regard that I have for her and her possible intentions to carry on Wayne's legacy."

Very classy. Wallace also refrained from the divisive politics encouraged by Branco and Maher last year, instead running a clean campaign focused on bringing passenger rail to the Lehigh Valley. Mike Dowd, who defeated Bill 5027 to 4082, is ironically the council member who introduced the rail transportation study.