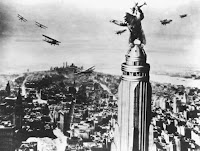 The massive ripoff illustrates a gaping loophole in the city's system for recording deeds, mortgages and other transactions.

The loophole: The system - run by the office of the city register - doesn't require clerks to verify the information.

Um, that "loophole" exists everywhere. I can't think of a Recorder of Deeds office in the country that requires clerks to verify what is presented. Doing so would result in recording delays, making even more fraud possible. (My thanks to Glenn for tipping me to this interesting story).
Posted by Bernie O'Hare at 12/03/2008 11:18:00 AM

I'm going to New York next week. I'll try and return the building to it's proper owner.

Would someone please buy Easton? Bernie, can you help?

I just thought they were happy to see me.