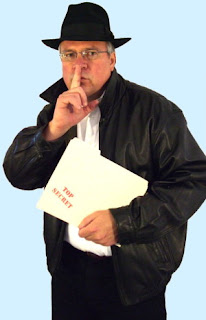 While strolling down a courthouse hall on my way to lunch yesterday afternoon, I saw smoke wafting from the pens where the fourth estate is usually caged. I rushed in, but the only thing on fire was Express Times reporter Sarah Cassi. She had just been ejected from a meeting of Northampton County's brand spankin' new Personnel Commission, and steam was coming out of her ears.

This agency is reviewing the controversial Hay Group salary study, which applies to its 350 nonunion employees, but I thought they were meeting later in the day, when it would be easier for county workers to attend. Silly me. I decided to go up myself and saw the three member commission huddled with human resources workers and Assistant County Solicitor Jill Mancini. I was politely asked to leave, and was told the public meeting would start later in the day.
At 2:30 PM, the time I was given, I walked in again. Sarah Cassi followed closely behind, and smoldered as the Personnel Commission spent a good ten minutes talking with Human Resources boss Connie Sutton Falk about different steps in the Hay Study salary scale. When the "public" meeting finally got underway, the only county worker there, aside from human resources staff, was Human Services Director Ross Marcus.

I had two questions. First, why did the Personnel Commission (which consists of Marna Hayden, Joyce Lang and Deborah Patterson) violate Pennsylvania's Sunshine Act? Second, why were they meeting in the middle of the day, when county workers affected by their decisions were working and unable to attend?

Assistant County Solicitor Mancini said she really isn't sure the Personnel Commission is an "agency" as that term is defined in the Act. Well, let's see. That term includes "any board, council, authority or commission of ... any political subdivision of the Commonwealth." Unless Northampton County has seceded from Pennsylvania, it's pretty clear that the Personnel Commission, whose members are appointed by the Executive and confirmed by county council, is an "agency."

I suggested to Mancini that since she is unsure, why not err in favor of the public's right to know? Instead, she said something about erring "on the side of caution."

Mancini also claimed that the closed meeting was for "administrative action," defined as the "execution of policies relating to persons or things as previously authorized or required by official action of the agency adopted at an open meeting of the agency. The term does not, however, include the deliberation of agency business."

There are two problems with her argument. First, the Personnel Commission never authorized any such meeting. Second, as Sarah Cassi pointed out when she got going, the Commission was conducting "agency business" behind closed doors. They had pre-decided Marna Hayden's appointment as chair. Moreover, they were deliberating aspects of the Hay Study, right under my very big schnozz, before the public meeting ever got under way.

According to the very language of the Sunshine Act, "[S]ecrecy in public affairs undermines the faith of the public in government and the public's effectiveness in fulfilling its role in a democratic society." That's precisely what happened yesterday. How can county workers or taxpayers trust a body that excludes them?

Yesterday's 2:30 PM meeting time was certainly convenient to Human Resources staffers and Personnel Commission members, but made it impossible for most county workers, as well as the public, to attend. In fact, I can find no evidence the meeting was even advertised, a Sunshine Act requirement.

As the meeting went on, County Exec John Stoffa dropped by, as well as Solicitor Karl Longenbach. But those most dramatically impacted by the Hay Study were doing their jobs. After the meeting, I spoke to Sheriff Jeff Hawbecker and Controller Steve Barron, both of whom had spoken eloquently at the Personnel Commission's inaugural meeting. Jeff was in Reading and Steve was unaware of the meeting. Human Resources Director Connie Sutton Falk claimed everyone could have attended, but did they know about the meeting? She ended up restating the positions of county workers. They really should be permitted to speak for themselves.

Commission Chair Marna Hayden explained they had no control over the meeting time yesterday, but will ensure that future meetings are scheduled at times when both workforce and public can attend.

Northampton County Exec John Stoffa, unaware that the Commission had met behind closed doors, gave them a little advice. "Have all your meetings open," he said, noting that secrecy just "causes suspicion among the employees."

The Hay Study recommends that 22 workers be "red-circled," i.e. denied additional raises or cost of living adjustments. Controller Steve Barron previously told the Commission that these are "the best of the best that work for the county." Stoffa acknowledged that it bothers him as well. "There's a value to someone who walks around with a lot of history in his head. He can come up with an answer in 30 seconds that takes others 3 or 4 hours."

The Commission will meet again, hopefully in public and at a time when affected county workers can attend. Chair Marna Hayden wants to see if adjustments can be made for red-circled workers.

"I don't know that we will be trusted at this point," says Hayden.

Stoffa is such a hypocrite. He throws out experienced people that could be helping the County during difficult times because he hates independent thinkers. He brings in inexperienced hacks he can control.

He deserves the reputation as the worst County Executive in the history of the County.

The answer is simple.

Most POLITICIANS - of EITHER party - have a simple rule:

Skirt the law, avoid the rules, cut corners, and try to dupe the public.

After all, it is most likely that they won't be caught, and even if they are, most citizens won't know how to successfully challenge their crap.

It is a simple formula, because it almost always works.

And, again, BOTH PARTIES do this crap all the time. Because they are too special and doing IMPORTANT things to let the inconveniences of rules to interfere with their important work.

And should anyone raise a question? Simple. Attack them as malcontents.

The sad thing is that this practice works. In Democrat strongholds and Republicans strongholds.

Like you, I am attacked by those in my party as a "problem" and accused of "helping" the opponents.

I simply want open, honest government that complies with the law. I never thought that in America that such citizens would be viewed as the "enemy". Yet, we are. And many of us belong to both parties....

good work, bernie! you can't imagine how many municipalities daily conduct secret meetings! stop by some of the smaller boroughs unannounced. beta see council members huddled together
doing just that.

Sarah cassi is the watchdog on this one, not me. Newspapers are big on transparency, which is a benefir to us.

Stoffa asks a government agency to meet publicly and he's a hypocrite. This is something he has always inssted on, even with administrative committees.

I know the violation was unintentional. The Comm'n is a group of volunteers who listened to their lawyer. Jill Mancini is a very nice person who reads the law more restrictivewly than I do. Had Sarah or I sued, we would be told that any defect had been cured by the subsequent public meeting.

We like to joke around in our office that we would not know anything about what happens where we work if it weren't for your blog. Your post on this topic just proves our point.

isn't the personnel commission a stoffa-appointed commission working with stoffa's director of human resources? and an assistant county solicitor appointed by the exec? so isn't it ultimately the exec's responsibility to make sure these meetings are held publicly?

somehow, bern, i suspect you would have castigated reibman had this happened on his watch, but you give john a pass.

No. The personnel comm'n is created by the Home Rule Charter. Members are named by Stoffa, but must be confirmed by council. It is an "agency" for purposes of the Pa. Sunshine Act.

Now, I blogged about thisw, had a rather lengthy discussion about it during the public meeting and discussed it afterwards with a county attorney. I was highly critical of the closed door meeting.

The only reason I did not slam Stoffa is bc he had no knowledge of the secret meeting and actually agreed with me, and publicly told the Comm'n it should NOT meet benhind closed doors. Stoffa should be complimented for that attempt at transparency. Had Reibman acted like that, i woukld compliment him, too.

But there's still a problem. The commission is supposedly an independent body. Yet it is using an ass't county solicitor. I think it should have its own attorney.

Hahahahahahaha, this politics related YouTube video is truly so humorous, I loved it. Thanks in support of sharing this.