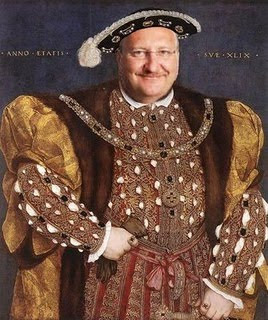 I've long claimed that Allentown Mayor Edwin Pawlowski has taken "pay to play" to unprecedented heights in the Lehigh Valley. When potential city contractors call him, he even schedules their appointments during fundraisers. One hand washes the other. Of course, it's legal bribery. So some nitwit blogger is complaining about King Edwin's ethics, what else is new? Funny you should ask, because someone with a little more credibility than me is asking some interesting questions about King Edwin and his connection with political power broker Marcel Groen. That person? Lehigh County Exec Don Cunningham.

In a riveting report by Morning Call scribe Jarrett Renshaw, we learn that Groen's law firm has been paid over $350,000 by Allentown since 2006. We know that Groen himself is a Pawlowski and Callahan campaign contributor who attracts other donors. But his real strength is his ability to help someone with political aspirations.

Don Cunningham bluntly states that with Green, "it's about money and business." He does not stop there, but adds this. "So anyone that wants to run statewide must go through Montgomery County if they want to advance themselves. ... Clearly Pawlowski has developed that type of business and political relationship with Marcel."

What Cunningham is saying, if you read not so closely between the lines, is that Pawlowski is a crook willing to sell out Allentown for a higher office.

It's Groen not Green.

Will correct. Thank you.

A little envy here? Donny C was passed over by the King makers in favor of Onorato. Maybe this is a bit of back at ya sour grapes.

I mean the Big D has never been shy about contributions if they were offered.

you read a lot into cunningham's statement.. i read merely that Ed must kiss marcell's ring. the rest is all wishful editorializing.

King Edwin 111, looks a little heavy in his robe, needs to change tailors.

your boy donny is done. he won't make dogcatcher. you and the mc have really stretched this one. both of your butts are showing but I'm sure you are used to that. next loser..callahan

Sounds like sour grapes to me more than anything. So Donny boy didn't get his ducks in a row. A day late and a dollar short I guess.

Someone already mentioned this concern, but the minute we read the
Call report on Pawlowski's burn plan, cancer risks came to mind. Do you know one in three Americans now faces a cancer risk?

Allentown residents need to attend council meetings and demand this plan be stopped.

To risk city residents' health for what?

Bernie
Would you consider another blog on yesterday's Call front page story regarding Pa politicians, their criminal records and what purpose the story served running 15 days after voters went to the polls.

Scott Ott did in Don's political future, not the king makers.

Cunningham couldn't get out of his own way against an unfunded, unknown. Scott Ott would likely win if the election were held today. Don was no longer a viable statewide candidate.

"I've long claimed that Allentown Mayor Edwin Pawlowski has taken "pay to play" to unprecedented heights in the Lehigh Valley."

"Would you consider another blog on yesterday's Call front page story regarding Pa politicians, their criminal records and what purpose the story served running 15 days after voters went to the polls."

I didn't think of that, but you're right. Frankly, I wonder what purpose it serves at all. It is an AP story, not an original story from the MC. The headline screams that locally, lawmakers are "dogged by their criminal pasts." But locally, I don't think that's true. Everyone knows that Boscola and Browne had their DUI problems, and nobody holds it against them. Politicians who raise the issue - and they do - see it backfire. Ask Jenn Mann how bringing up Pat Browne's DUI helped her.

I have a little more concern about pols with active criminal charges, like Orie and Warren.

Oh, please- Ed Pawlowski vying for higher office? I think not. At best Hizzoner will return to a career as a community organizer or bureaucratic official at the end of his term.

Bernie-10:32 post
Imagine delving back into anyone's 20-year-old past. Isn't life about
learning and forgiveness? Trash story that symbolizes low Call threshold. Browne and Boscola seem to be doing better.

The Delta idea is interesting but it should be checked out that it will do the job successfully without bad side effects.

Yes Groen not Green ... But Groen in German means Green I think.

There is no "end to his term". Allentown has no term limits on its mayor. So get ready for the sequels...Pawlowski Administration Terms 3 and 4.

Pawlowski will run for Congress in 2012. He will go to Haiti on the anniversary of the quake and FMZ-TV will tag along to capyure the photo -op. He is going as part of the Life Church mission.
The church is already recruiting people to go on the trip with him.
Groen has already cleared the field so his majesty can run unopposed in the primary.
His Majesty has a chance in 2012 because Obama for America will be back in charge, they will turn out the votes to defeat Dent.

Don has oficially lost his mind. He has some sort of scorched earth plan going on and its scary to watch. He stabs both friend and foe in the back at this point. Maybe he is just dying for attention or likes to read his name in the paper, I'm not sure but its sad. I always liked Don and hope he can pull it back together.

As far as Pawlowski seeking higher office, I think he is enjoying his time as Mayor and quite frankly doing the best job he can with what he has. Maybe if the County Exec would do his part the city would be better off.

Wow, I love the drugs some people are taking. I heard all about the Pawlowski for Congress paradae this past weekend.
What world do you people live in?
Dent's campaign will crucify the reverend. I don't say write with any glee, I write it with a warning.
Did you not notice how popular the Republican incumbent is in the community?
Pawlowski would get killed in the suburbs, where the people actually bother to vote instead of talking about it.
Go ahead, dream on, let the Mayor Run. But this isn't a Barletta against corrupt Kanjo deal. It's a whole different animal. Pawlowski against Dent would allow Dent to get re-elected with 60%.
I love my Dems, but I am a realist.

Don is just keepin it real ya'll. Listen up whitey, Callahan didn't spend a million dollars for nothing. He will be the Dem candidate fro congress in 2012.

By then the teabaggers will have shot their wad with no results and the Country will be tired of their show and Dem's will win in a landslide as Obama/Biden beats Palin/Bachman for President and drags a million D's with him.

I pray that King Edwin runs. It would be a dream come true for me.