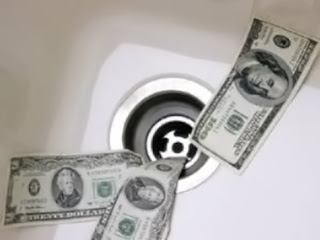 When Northampton County's 290-space parking deck was first built in 1975, its estimated life was 35 to 40 years. Obviously, it had to be fixed. But at a Council Finance Committee yesterday, two engineering firms spent what seemed like 35 to 40 years, trying to justify a $513,767 cost overrun on a $1.7 million project.

"Unforeseen conditions" is the explanation. They apparently had no idea water could do so much damage.

Even the Ancient Mariner could have told them water was destroying that parking deck. Two engineering firms nevertheless put on lengthy power point presentations, claiming they were mystified by unforeseen damages.

Once completed, these improvements will extend the life of the garage by 15 to 20 years.

"Then you bid it accordingly," responded Council President Ron Angle. "We always get waxed up," he complained. "Whenever there's a government project, we get waxed up."

Exec John Stoffa pointed to the juvenile detention center project, which came in under budget. He proposed using that money to pay for the overruns. But even the normally cheerful Peg Ferraro was visibly angry at the extent of the overrun.

Council vented mostly on Public Works Director Steve DeSalva, who regularly works sixty hour weeks and took responsibility. But he also insisted, "It had to be done."

Wow, a 33% overrun. This hard working DeSalva sounds like a Stoffa appointee.

When he is doing his 60 hour stints how much of that is playing computer solitaire.

A few more years and another incompetent out the door.

First I want you to know the Pennoni Company has been barred from bidding on various States VA Del MY DOT projects for reasons you will need to look into as I don't want to be accused of slander. Second their rating with PennDOT is just above average while other companies are as close to perfect as possible. They have a poor track record . Question were they the lowest bidders? You get what you pay for. And BTW this is standard practice. Low bid and then unforseen add ons. Congrats Ron you got the taxpayers taken. Why not sell Gracedale (AGAIN) and pay for the cost overrun. The whole lot of council and that incompetent Exec should be tried for Treason.

Or better yet, open the 2011 budget, and start slashing county jobs to pay for the overrun...

6:37 I love your ilk. Why not simply abolish government all together and return to a primitive, savage state. Get rid of all the employees.

Government is inherently evil. Its at least a socialist if not marxist conspiracy. Not to worry. Have no fear the right wing is here.


Fist fights, knives and guns will resolve every dispute.

Government is not inherently evil. It is inherently irresponsible with money. It's the nature of the beast when the beast doesn't have profit/loss responsibility. Many believe the government can run better and less expensively. Unsustainable retirement benefits are a prime example. Part time tip staffs receiving full time benefits is another example. The baby (police, fire, courts) needn't be thrown out with the bath water. But there's a lot of bath water that's yet to be disposed.

Privatize the parking deck and start charging the county workers to park there!

"This hard working DeSalva sounds like a Stoffa appointee."

This is an unnecessary and mean-spirited shot at a person who has by and large done an exceptional job.

Some hospitals in NJ charge employees for parking privileges.

"Some hospitals in NJ charge employees for parking privileges."

Allentown chargest employees at city hall to park in the deck next door.

"This hard working DeSalva sounds like a Stoffa appointee."

"This is an unnecessary and mean-spirited shot at a person who has by and large done an exceptional job."

What bugs me most is that the over-runs seem like a complete surprise to council. Either they were not informed in advance (a simple memo should be sufficient) or they weren't paying attention. Informing council of HUGE over-runs shows 1)over-runs occured and therefore the project was mis-managed and 2)council was poorly informed of the costs as they were mounting 3)council/exec made poor contingency cost plans in selecting a contractor. This is a textbook of a mis-managed project. At this point, it would have been worth investigating the economic value of tear-down, build new (for about 6 million and double the life and fewer maintenance costs for the next 15 years).

The possibility of tearing it down and building a new garage was explored and discounted. I wrote about that. The project just started a few months ago. Council members do not wear hard hats and inspect job sites. As soon as Angle got wind of the overruns, he hauled them all in.

DeSalva might very well be the hardest-working cabinet level official, and there are several of them. He endured the wrath, but in my eyes, the real bad guy here is Pennoni, who went way over budget on a mater that was easily foreseeable.

They underbid and hoped to make it up with overruns. We did get waxed up.

"They underbid and hoped to make it up with overruns. We did get waxed up."

Meaning that everybody involved failed to do their research on the project. Low bids sound great, but quality matters. I blame the firm as well as the staff, executive and council. It's entirely reasonable that they are all responsible.

Big picture... the whole thing shows how quickly something relatively small can turn into something out of control. It happened with the courthouse. That's why it's great that Lehigh County revisited the costs of the courthouse renovation/expansion. Even the revised project cost more than expected. Imagine what the original plans would have done? To anybody who has to manage a project, anything that doesn't include 20-30% contingency is simply opening themselves up to being tagged as irresponsible.

Now why would anyone be surprised of a project going over budget? Less government more privatization. Then things will run more efficiently when appointed aren't spending other peoples money.

After reading this, and not being surprised in the least, it's easy to understand the folly of the county's growing boondoggle at Gracedale. It needs to stop. Government has trouble performing basic tasks efficiently. More complicated tasks, like running a nursing home, are out of the question.

The Government (NORCO) DID hire a private sector company (Pennoni). Look up Pennonis' track record. Asked to leave projects by clients in the middle of contracts due to incompetence. BTW they are Fast Eddies favorite inspection company (go figure). Big contributors to his election coffers. Who did they contribute to in NORCO?
Just asking.

What ever happened to sticking with the bids? They made the bid at a certain number, if they don't meet it, it should be their problem.

This Administration is a boondoggle!

"Who did they contribute to in NORCO?"

So far as I know, they have not given a dime to anyone currently in County office.

" but in my eyes, the real bad guy here is Pennoni, who went way over budget on a mater that was easily foreseeable"

that's pretty much their MO and rep in the industry.

One of my favorite sayings.....

The bitterness of poor quality lingers long after the sweetness of a low price is forgotten.

To many municipalities, and federal projects are awarded to lowest bidder, and the projects should be awarded to the lowest "responsible" bidder. Good thing most projects require bonds, so that there is some way to find the better contractors.

This DeSalva guy came out of the Bethlehem government. Can anyone say, "incompetent".