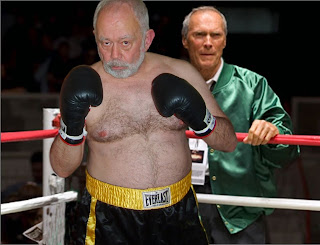 This week, I finally had the good fortune to hear from iconoclast Chauncey Howell, an Eastonian who has also spent decades doing TV news in the Big Bagel. I've always wanted to meet him, and now it's going to happen. Ironically, he was referred to me by Claire Sheridan, an Upper Mount Bethel resident I had just insultingly referred to as "Miss Snob."
Maybe she wanted him to beat me up or something.

"Well, she did go to Miss Porter's, so I guess you pegged her," says Chauncey. He also tells me how he met that "awful Ron Angle." It was only once, and at the Easton Y.

"He popped out of the pool water like a naughty little nereid or a pudgy-PADutchy triton - I was astonished - at the gerontophile Y in Easton, and announced himself.

"'Well, you are certainly a cute little guy,' I said. I did not really know who Ron was. Do now.

"Then he launched into a panegyric about my late father and told some great stories about him. So I had to like him."

Chauncey is a "nominal Democrat but, true to our squirearchical background, a staunch rural Tory----but with strong populist leanings. I give speeches in Italian, as my father did. But I can do Yiddish too."

Howell is the epitome of a bon vivant. He is a local treasure. It's always been my hope that we would get to see more of him on NYC news.

Not so today.....Chauncey is rude, vulgar and sometimes downright nasty. Ask the Easton Heritage Day committee why he doesn't do the Declaration of Independence anymore. He is fast becoming a pervert.

I used to enjoy him on Sal Panto's Italian show. Sal gave him plenty of air time and I enjoyed his little stories and bits of Italian culture. But when Sal ran for mayor he didn't even support him and supported Fleck and then the other guty in the general.

Chauncey needs to clean up his act, especially when he is in public.

I suspect he does not do the Declaration of Independence because he has decided King George was right. In fact, he may be a British spy.

What some group of elitists decides has very little bearing on my thinking. If anything, it makes Chauncey look better.

Now they got some faux liberal who prances around and brags about his Golden Rake from Sam Bennett. No thanks.

I prefer the ride, vulgar, and sometimes downright nasty to fakes.

But when I meet Chauncey, I will tell him all about the Fleckster and I see the marvelous work Sal Panto is doing every day.