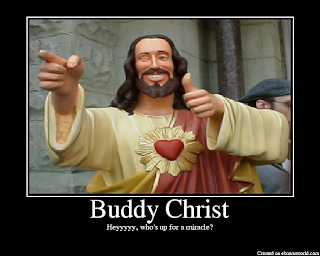 Hey, people! Got Christ? Who's your Buddy? That's right, bippy, it's Me. I've got your back! I just turned O'Hare into a bedpan at Gracedale., so he can receive a little of what he's been dishing out over the past few months. And Angle? He just woke up next to Ann McHale. Tied up, too. Who says I don't have a sense of humor? I invented humor, damn it.
While O'Hare is getting splattered and Angle is praying to Moi, let's get to down to business with my Election Day picks.

Governor: I'm gonna' let you in on one of My Divine Secrets. I like to keep things simple. I'm God. Christ. Do I have a name that goes on and on and on? No, damn it. The more syllables in someone's name, the less likely he's gonna' be a winner. On-or-at-o has four syllables to Cor-bett's two. Corbett will win because you mortals can at least remember his name. Sorry, Dan. Back to Pittsburgh for you.

Senate: I'm not crazy about Joe "I was an Admiral" Sestak, but I'm pretty sure Toomey is a robot. Seriously, he's got the personality of a dead fish. In fact the first time I met him, I thoght he was Lazurus and tried to raise him from the dead. He's gonna' get elected, so Pennsylvania will now have two dead Senators. But my vote is still going to the human, Sestak.

Congress: Johnny, Johnny, Johnny. You had that Christmas City gig going for you. You could get wasted at Apollo and free lunch at Nino's whenever you wanted. Dude, you could have coasted into Congress if only you had been patient and actually served in the job for which you were actually elected. But no, you wanted it NOW and were willing to step all over the very person you praised for getting things done. That's pretty damn arrogant for somebody with three syllables in his last name. And that flyer depicting a soldier with blood streaming down his face? Not cool, dude. That probably cost you votes. Instead of going to Congress, you should pay a visit to a confessional. Take your brother-in-law with you.

Emergency prayer from Ann McHale: "Jesus Christ! What the hell is Angle doing in my bedroom, all hog-tied? (I answer all prayers, but never said I answer them right away).

Browne v. Orloski: What the Hell happened? Seriously. Last time these two squared off, I was proud of both of them for their civility. This redux started off that way, too, but Lucifer must have got to Rick. He is, after all, a lawyer. Anyway, all of a sudden, Rick is bringing up Pat Browne's 1995 DUI, the same damn thing that backfired on Jen Mann. Dude, if that stunt didn't work with her, do you really think it would work for a guy with three syllables in his last name? Browne.

Mensch v. Wallace: William Wallace was disemboweled and beheaded by Edward I because he kept screaming "Freedom" day and night. Our local Bill Wallace has not, to My knowledge, ever had his intestines removed. But he has lost two races for Northampton County Council, has no money and refuses to embrace the party boys. What's even worse, he actually believes in a bipartisan approach. I like Mensch, who is a terrific speaker, but like Wallace just a little more.

Boscola v. Connolly: Being Christ, I'm everywhere, so I was at last week's debate between Lisa Boscola and Matt Connolly. Did you know Lisa actually dreams about medical marijuana? Go figure. She's a pip. When Lisa refused to insist that her COS apologize to the women she offended on this very blog, O'Hare vowed he'd vote for her opponent today. And once he gets out of that bedpan, that's what he'll do. But Lisa will win.

Emergency prayer from Ron Angle: "God help me! She's got some guy in a Batman suit coming in here and aahhhhhhhh!" (I'll get to Ron a little later).

Freeman v. Shegda: I was in Hellertown last night, and the only Shegda signs I saw were the ones in his own yard and next door. He's probably the only person in he Universe who's been kicked out of the tea party. And his latest stunt is to walk around telling everyone that he's "Jesus in disguise." Say what? That's right. Look, dude, I never ran for state representative. Look it up. I said "Render unto Caesar" and stuff like that. This Ron's NOT for you. Freeman.

Simmons v. Horton: Now Horton is no Ron Shegda or Jesus in disguise. Nope. He's Malcolm X. He told the Easton NAACP that his thick glasses are in honor of someone who called the white man "the devil." Now I know the Devil, and he's not white. Most of the time, he's red, although he insists it's magenta. Whatever. Anyway, Horton will say that to a mostly black audience at the NAACP and then sing a different song elsewhere. He's a fake who dumps all over Simmnons because he has no experience. Neither did I. Simmons.

Dertinger v. Emrick: Anybody but Dertinger! Anybody but Emrick! Uh oh. I am Jesus of Nazareth, so this is my District. What a mess. Charles "Don't Call Me Charlie" Dertinger must know he's losing. He's good at that. He's lost three races for County Council, a race for the State Committee and a race for Congress. Gobs of money from the unions are no help. As My Father once said, in his deep bass vice, "You can't shine shit." Emrick is not much better. So I'll be voting for Rich Grucela.

Emergency Prayer From Archangel Gabriel: "Hey Buddy, I think O'Hare actually enjoys being in that bedpan. He's singing in there." (He won't be singing once he's flushed).

Harhart v. D'Agostino: Dr. D-Ag-o-stin-o has too many syllables, so he loses. That's the Divine Rule. Soory, Dude Should have checked with Me.

Brennan v. Malony: These two likable Irishmen both belong in office, but the office that best suits Malony is his acupuncturist office. Brennan.

Reichley v. Slattery: Reichley has reached a point in his career in which he is being recognized as a leader, and that's good for the Lehigh Valley. Of curse, this probably means he'll resign. Reichley.
Posted by Bernie O'Hare at 11/02/2010 01:20:00 AM

Maybe all the Republican winners tomorrow will sell off the American elderly the same way the Northampton County Republicans want to do to our county elderly..

"And Angle? He just woke up next to Ann McHale. Tied up, too"

What an interesting blog post to read the day after I finished reading "The Shack." I see many similarities!!

Sorry to hear about Bernie's bedpan fate - I hope he's getting a good scoop, at least.

Thanks for the laugh - this was the best summary of the 2010 local midterm ballot yet.

nice to read some intentional humor every once in a while.

If you liked "The Shack" you'll love this:

Lamb: The Gospel According to Biff, Christ's Childhood Pal

It's a bit more irreverent, but hysterically funny, and, in its own quirky way, respectful of the topic. (If you can get past the part about Jesus watching Biff and Mary Magdalene while invisible because he knew HE wasn't supposed to do that sort of thing - but no one told him he couldn't WATCH.)

This blog entry, in fact, reminded me of "Biff's" first person account of the life of Christ quite a bit. Well done!

I'll have to read "The Shack." I passed on it a few years ago when it first came out.

The beginning of "The Shack" is a little hard to get through, since it's a tale of how a father deals with (or can't deal with) the murder of his child. But once you get further along, you'll understand. Really, though Bernie, I think you'd like "Lamb" better.

Hey, if you plan to attend Friday's Tea Party meeting, at which Ken Matthews is the guest speaker, please find me and introduce yourself. I'll be hanging around the back table by the patriotic jewelry.

Will do. Still unsure I'll be there.