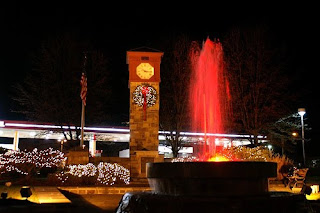 "When I see you're looking at raising taxes 6.25% in the worst economy that we've seen since the Great Depression, ... my concern is this. We need to take a look at cutting expenses because the expenses are going to continue to rise."

This admonition, which comes from self-described tea party member Bryan Eichfeld, was delivered to Hellertown Borough Council at their November 1 meeting. Hellertown has only collected $370,580 of the $500,000 in revenues anticipated this year.
"When we're raising a mill just to pay salaries, that scares me, it really does," stated Council member Stephanie Kovacs, who spent the evening questioning line item after line item in an unsuccessful effort to reduce expenses.

Richard Staffieri, who has served on Council for over forty years, condemned paying "salaries that are outrageous when the people that are paying the salaries aren't working." But he added, "I agree with 51% of this budget, so I'll vote for this budget."

With Council members Kovacs and Thomas Rieger voting No, the other members agreed to a Staffieri motion to advertise the budget as a preliminary step towards adoption. Council President Philip Weber advised that, though advertised, the budget can still be modified until December 6, the date set for adoption. The budget is available at Borough Hall for public review until November 29.

In addition to agreeing to advertise a budget calling for a possible 6.25% tax hike, Council members listened to a report from their engineer. Hellertown's busy Main Street is sometimes referred to as a "Berlin Wall," separating the western and eastern parts of the borough. Borough Engineer Bryan Smith has attempted to tear down that wall, unveilig the results of a $90,500, nine-month "walkable community smart transportation study."

Among 28 recommendations to make Hellertown more walker friendly, Smith proposes installing two additional traffic lights on Main Street, and reducing its speed limit to 25 mph. He also urged that Borough Council make some changes to the intersection of Main Street and Easton Avenue, and advised that the Lehigh Valley Planning Commission has up to $500,000 available. Council gave Smith a green light to apply for some of this grant money, with Council member Stephanie Kovacs opposed.

Public Works Director Tom Henshaw also reported that Santa Claus will be visiting Hellertown at 7 PM, November 26, to celebrate "Light Up Night" at the Fountain Plaza.
Posted by Bernie O'Hare at 11/04/2010 02:40:00 AM

Email ThisBlogThis!Share to TwitterShare to FacebookShare to Pinterest
Labels: Hellertown

I have an idea, lets just shut down all the local borough's and townships. Meld them into the closest city. Dramatically drop the levels of services and there you have it. No need to worry about tax increases. Or better yet, lets not have any local government unless it is county run.

Emblematic of the first wave of the crisis hitting municipalities across the country. "We need to raise taxes so we don't cut essential services." "What are essential services?" "Well, employee salaries, employee pensions, employee . . . " "Why can't the borough just contract for those services to reduce employee overhead?" (long pause).

The problem with local governments is idiots like Stephanie Hoppes-Kovacs. She likes making statements that alienate and enrage people. She lacks substance!

Hellertown should have long ago merged with Lower Saucon and blended their services together.
Mergers and consolidations need to be friendly and not forced and these two municipalities are joined at the hip.

Both elected boards have bright stars and goofballs that couldn’t balance their own checkbook or understand the inner workings of government if it was read to them like a bedtime story.

Better yet, merge Hellertown with the City of Bethlehem; they blame all their ills on the Casino so they should also reap the benefits first hand.

Charlie, you’re getting out while the getting is good.

$90k for a study and add more traffic lights that's worth a nickel of advice!

6;21 Who wants to merge with larger municipalities, like Allentown, (imposing a 40% earned income tax even on employees who don't live there!), ?
It only makes things worse. Raising taxes for salaries is a sin in these economic times on every government level, especially when the taxpayers have had job losses and salary freezes.
People, take back you local governments. Next year is your time.

Wait, isn't that the home town of the taxpayer advocate Shegda? Did he fight for them?

They need to stop giving raises out and benefits like they are... I can't wait to see what they've given away in these next two contracts....council needs to wake up and stop giving there "friends" everything they want and stand up for the taxpayers.