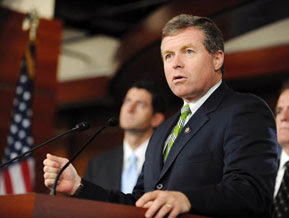 According to the still unofficial count in Northampton County, Bethlehem Mayor John Callahan won every Easton ward. Of course, Easton also votes for the Fleckster and the Vulcanos. But what really amazes me is that Congressman Charlie Dent took six Bethlehem wards from Mayor John Callahan on his way to a 56-38-6 victory in a three-person race that also included independent Jake Towne. How the hell did that happen?

You can thank Democrats. According to a Committeeman who was canvassing that area with literature, he saw a number of Democratic super voters with "Democrats for Dent" signs on their lawns. Some specifically told him they would not be voting for Callahan.

Fairly or unfairly, some question Callahan's character. Others question his fiscal stewardship in Bethlehem.
Posted by Bernie O'Hare at 11/03/2010 12:06:00 AM

Callahan is a fraud. Most people know that and that is why outside of the effect of his patron Don Cunningham he is lost. He was seen as a replacement of the Don. Unfortunately, he has been a major disappointment to people who supported Don and then joined on with Callahan.

Callahan's speech was nothing but a warm up for 2012. I hope he takes a minute and fixes Bethlehem. Have you noticed the neighborhoods Johnny, they are staring to go the way of Allentown. Stop with the campaign schmoozing and the broads and start trying to be a Mayor.

Bethlehem is in sad shape and there is no one to blame but you and your rubber stamp Council.

Dent for Congress. Callahan for mayor.

At least Johnny did better than Sam Bennett! At least the Dem's are offering better foes for Charlie than in the past! I held my nose and voted all Dem's against my better judgement. I lost all around but that is politics. Mr. Casino a very flawed candidate. Start looking now for a winner.

"! I held my nose and voted all Dem's against my better judgement. "

Too bad you couldn't vote your conscience.

I have to agree with Bernie on this one Dave. I can understand being tied to a party based on a common ideology, but in the end a party doesn't vote for items an individual does. In all honesty if you have to “hold your nose” while you vote, that’s just a sign you’re making a wrong choice.

Why do people vote straight party? Don't they realize that is how the "sleaze" gets into office?

It's ingrained..somewhat from up bringing. I have voted for Dent in the past but not this time. Can any of these guys deliver the goods? Will they put people back to work? The people have spoken and we'll see what transpires. You yourself called Toomey a dead fish! Corbett I can accept and Emrick will be lost out there in Harrisburg. Onward..

"jobs""putting people back to work"

Can someone write a few paragraphs explaining the logical chain of events starting with the election of a particular representative and ending with a sustainable job.

Government just does not do this.

I (metaphorically) held my nose as I cast some of my votes. Why? Because neither candidate represented my views very well. I was forced to choose between two unpalatable (to me) candidates and voted for the least objectionable of the two. I would prefer to have had better choices in several races, especially the governor's race.

When you look at the Easton Results for Toomey/ Corbett/ Dent, you can see that the Easton Republican Committee was very poor. They didn't put any signs out, and the results show it. At every election site I went there were lots of Democratic Signs but no Republican, (unless the candidate put them up.)This also seemed to be at sites where signs were put. Mr. Shuman I believe a change in Easton leadership is needed.
Ron Shegna did better in some of the races. Because he put up signs.
It goes to show you Campaign signs do work!

Dent effectively smeared the mayors record and some people in Bethlehem bought it. He took some accounting anomolies and made them out to be bigger issues....Kudos to him. Callahan camp would have done the same thing if things were reversed. I just hope Rep Dent does not blindly follow Boehner and his ideals. Charlie needs to represent us and I look forward to see how he does over the next year because that will determine weather he gets a heavyweight challenger again.

as far as Anon 12:56 goes I don't know where your looking, try canvasing in Bethlehem, Allentown and Easton then I dare you to make similar remarks.

As John said in his speech he looks forward to continue to work with Rep Dent to do what's best for the lehgh Valley and the 15th district as a whole.

Mr. Shuman ran Democrat John Stoffa as their candidate, is it any wonder they are incompetent.

Alan Earnshaw said...
"I (metaphorically) held my nose as I cast some of my votes. Why? Because neither candidate represented my views very well. I was forced to choose between two unpalatable (to me) candidates and voted for the least objectionable of the two. I would prefer to have had better choices in several races, especially the governor's race."

I said the same thing as you in 1973 while deciding to run for Bethlehem City Council...then I went into action myself, ran and won 2 terms before I left. I think I made a difference representing my constituents and then it was someone else's turn, I figured. Mr. Earnshaw, if you're not happy with the choices, why don't YOU step up to the plate is my question?

larry kissinger - a legend in his own mine just like callahan

And one who signs his name to his comments. What possible purpose could you have for anonymously trashing a retired man who served his community with distinction?

You have to wonder if Onorato and Sestak think they got their money worth from the Fleck/Hickey campaign team. I tend to think not.

*They didn't put any signs out, and the results show it.*

To Anonymous, 10:31 - Why don't you contact the Republican Committee in Easton and see if you can help? How many signs did you put out? If you're not part of the solution, you're part of the problem.

Be on the lookout for Mike Fleck !

Funny how Dent's represented Allentown for a long time, oh wait, HIS ENTIRE POLITICAL CAREER yet the man can't win Allentown. Don't be a jerk Bernie. You won, now let's see how your boy wonder does - we'll all be watching!

I heard now that the campaign is over Callahan is back at the Apollo Bar at his usual spot.

"a retired man who served his community with distinction?"

Which is FAR more than what can be said for you Bernie.

Anonymous said. "larry kissinger"-a legend in his own mine just like callahan. 6:14 PM."

anon, maybe you meant "kisslinger" which is my real name AND legend in my own "mind"! Someone once said it ain't bragging if you can do it! I did and still do so. Ask anyone who really knows me as we still help each other daily to date. I don't ever consider anon's opinions as fair comments while attacking another without reason or facts. I'm not perfect but have, and still do, serve others ever asking for help which is our only job here on Earth, is my honest opinion. What's your job?

Anonymous said...
laughing at old egotistical fools like you 7:31 AM

(guess anon meant me as one) admittedly, I am an old egotistical person but I am not a fool like many cowardly anon's commenting here and elsewhere on blogs! I agree some anon's have good reason to opine as anon on any "issue" but not when they are personally attacking anyone. They seem to have too much time on their hands and must be bitter about their postion in life. I pray those types should try to get their lives together asap before they have to meet their maker!