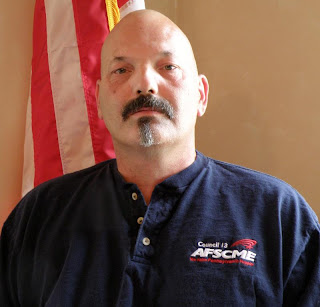 Evil Ron Angle has been vilified as the driving force behind a sale of Gracedale. But as recently as yesterday, he told me he's still willing to keep it in County hands if unions agree to $6 million in concessions. AFSCME Agent Justus James walked out of the last "negotiation" session. Instead of givebacks, County officials were greeted by a giant inflatable rat and a horde of union members, who carted terrified and wheelchair-bound residents into a Council meeting. Of course, they did it at County expense.
If this was an attempt to bully Council members, it backfired. They voted that night to hire someone to steer them through a sale.

Now, a referendum drive is underway. But it's increasingly apparent that it will fall well short of the required 20,000 signatures, especially as the nights grow longer and the weather turns colder.

Some Gracedale union members are beginning to have second thoughts about the tactics used by their leadership. Inside word is that Justus James has been pressured to call the John Stoffa administration, but he's refused.

James did recently promise a Council member I won't name to call one particular County official. But guess what? As of the end of the day yesterday, there's been no call.

If James thinks the County is bluffing, he better think again.

I suspect AFSCME has already decided that concessions might jeopardize other contract negotiations, so Gracedale's union workers are being sacrificed.
Posted by Bernie O'Hare at 11/24/2010 12:01:00 AM

It's a matter of trust Mr. O'Hare and no one trusts the Administration. The "fake" rumors of dis-unity is just that.

Angle and Stoffa will sell Gracedale so we will concentrate on the petition drive.

You're doing a bang up job of that.

Agree with O'hare on this one. The union will sacrifice its members and not back down. This reminds me of old steel union tactics when management was faced with rising costs and expenses. Seemingly, throwing the baby out with the bath water comes to mind when a union is faced with a potential shut down of a business instead of looking for meaningful cuts.

Share the pain? Have not heard from the other county employee's who have contracts stepping up and helping their fellow Gracedale brothers and sisters out. How about the corrections officers? They are probably next on the privatization list of the county. What are they willing to give up? Spread the hurt around and then all can survive to fight another day when things improve with the economy.

Share the pain? When County council (this year's council and last years) refuses to consider a modest tax increase that would have cost taxpayers maybe $2. a week at most in order to save gracedale then why should workers consider these insane cutbacks that Angle proposes. $2. a week isnt going to push anyone into foreclosure..NO ONE! So stop the crap already..You attack Callahan for his budget games in Bethlehem (and rightfully so) and let County Council slide. They should do what Lehigh county did and consider a tax increase..At least then they would have some credibility when they approach workers and ask them to give up hundreds per month in salary and benefits. You cant ask workers to do that when you cant even ask taxpayers to contribute a small amount more to save gracedale..Believe me , if they agreed to increase taxes for open space they would do the same to save gracedale.

My point is that it should not all fall on the Gracedale staff..that is scapegoating. What about all the other contracts the county has signed off on..where are those people? What are they willing to contribute in addition to what the Gracedale staff offered in give backs? I'm not adverse to a small tax increase but I don't get to make that call!

Wasn't addressing you Dave, was addressing bernie...Again, until the Council becomes responsible and considers a modest increase to help they have no credibility asking Gracedale workers or other county workers for cutbacks..NOne at all.

My take has been and continues to be that this council..especially the new members..NEVER addressed this issue..the sale of Gracedale..during their campaign runs prior to the recent election. It wasn't on the their radar or the voting public. Referendum is the only logical democratic way to settle it. Not happy with the petition wording at all but that's all we got at the moment to hang on to in the face of privatization.

We now know that the union is unwilling to sit down and do anything to keep Gracedale in County hands.

Anon 9:59 AM:
You are right. County workers at Gracedale do not need to make any concessions.

But, if they don't, they will lose their county jobs. Is that what you want? If it is, OK. If not, what are you thinking?

Following your advice will lead to the sale of Gracedale and the loss of county jobs.

Anon 1:27..maybe shou should learn to read..I never said they shouldn't make consessions..They already have..I said they shouldn't consider Angle's ridiculous concessions especially if council refuses a moderate tax increase of 1-2 dollars a week..But anyone that thinks workers families should give up hundreds of dollars in pay and benefits a month because the county doesnt want to charge taxpayers $1. a week is a moron anyway and really deserves no explanation..

The 10% requirement for the petition/referendum question is a pretty heavy number. Do you know what percentage of county registered voters actually voted in the last election cycle? If they get say..15K..that would be a tremendous achievement in it's own right and worthy of praise for engaging a lethargic electorate.

Gracedale will be sold. Unless, the teamsters, in force, get to County Council and agree to a drastic cut in wages. My advice would be at least 25 percent to start with. Ask County to keep your benefits the same. At least you will have health care. Then, you buy time. Perhaps in the future, when the economy turns around raises could be on the table or other work opportunities would be out there. Now.. what is a Gracedale employee's choice if his or her job goes away? Unemployment and no benefits. I would take a major pay cut for now instead of having to collect and buy medical insurance. Its time to throw out the Teamsters and get to County Council with serious concessions or face not being employed.

Following your advice, county employees working at Gracedale will lose their county jobs.

Calling me names will not change that.

They always make it sound like Gracedale employee's are making the best money and the greatest benefits. They have the same benefits the rest of county has,and there wages are not that great unless you work on the first or second floor of the tower and we all know who they are. Let the comon worker alone and go after the big wigs for a change. These workers deserve all they can get.

Sadly, Stoffa and Angle have scapegoated Gracedale employees fro the sins of the Government Center. Stoffa has cabinet and sub-cabinet workers making upwards of 90k a year. They approved contracts with caseworkers getting up to 8% a year raises. He has asst. directors who were old friends of Mr. Stoffa making big money.

Sad thing is most of the Gracedale staff are lucky if they make $25,000 a year.

Angle and Stoffa has used these low paid employees as victims to cover for the Administration's incompetence and avarice. This Administration took the biggest surplus in County history and wasted it on huge raises, employed pals and multiple pensions.

"Have not heard from the other county employee's who have contracts stepping up and helping their fellow Gracedale brothers and sisters out. How about the corrections officers?"

The corrections officers contract is not an issue, they had the foresight to make concessions during their last negotiation. In fact they negotiated a contract which the "bulldog" said was one of the best he has ever seen.

There is no reason for someone who has already given concessions to give more. Have a great day.

Fund the jail but defund the county home..makes all the sense in the world to me? Whats the base salary of an entry level guard/officer compared to an entry level care giver at Gracedale? I don't know the answer but I will venture a guess that the officer is overpaid and underworked standing around the jail counting heads every half hour compared to patient care. Show me the money?

Now Dave, You know as well as I do that the County has a legal obligation to fund the Courts, and that includes the jail. And concessions were made in the most recent contract, although not to the extent being asked of Gracedale's union workers. Somebody familiar with both told me the other day that , regardless of whatever last-minute attempt is made by the union, the County hould still sell because the place is badly in need of a culture change. Judging from the comments I've seen, I suspect that is true.

The jail should be run by a r[private firm. It is allowable under the law.

Stoffa has opened up a privatization can of worms. Soon people will see him for the hypocrite he is.

There is no real savings in privatizing the jails. Studies have shown it normally costs more in lawsuits due to the negligence and ill training of the private provider. This means the tax payer pays just about the same for incarceration and now gets sued more because of it.

Comparing the jail to Gracedale is like day and night really.

Yes by all means coddle the convicts and sell the seniors. A fitting epitaph to the Angle/Stoffa years.

I doubt there would be lawsuits. Mr. Angle has stated the private sector can do all things better than the public sector. Unless you believe prisoners deserve better care than our seniors.