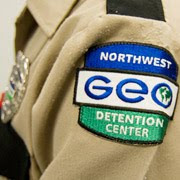 Tonight, at 6 PM, there will be an open forum about a possible Slate Belt detention center for over 2,000 illegal immigrants. This meeting will be hosted by GEO, which calls itself "a leader in the delivery of private correctional and detention management."

At a time when we have 10% unemployment, this proposal will generate 350 union construction jobs and 500 detention workers with salaries equivalent to those of police officers. In the economically depressed Slate Belt. On the other hand, the ACLU's Emma Cleveland has warned that private prisons like GEO generate human rights abuses, and it's net to impossible to track them because the Freedom of Information Act has no application to a private business.

Cleveland has set up a Facebook group, Coalition Against the Prison in Mt. Bethel. It's billed as a "group made up of concerned citizens," but it would be more honest to describe it as an ACLU-led effort.

But there are some very real concerns about private prisons, especially those housing illegal immigrants. They were detailed yesterday on NPR's Talk of the Nation. Because crime has flat-lined in the U.S., private prison corporations look at housing illegals as their new growth industry. They donated heavily to the Arizona legislators who recently enacted their new illegal immigration law.
Posted by Bernie O'Hare at 11/10/2010 12:03:00 AM

Same abuses occur with government sanction in public prisons. NPR is fronting for unionized COs and vulture lawyers who aren't as successful scamming private entities as they are the retarded government with its lowest bidder legal representation. Shocking.

Does Angle own the land where they want to build this thing?

Adjacent to the proposed site of the detention facility, as I understand, is his property.

Are you coming up for this meeting Bernie? Is Ron and John and/or council/county entities planning on attending? This may get a bit rowdy. I will be looking for you and hope you can attend the festivities tonight.

This is eye opening and what every resident should read before attending the meeting and ask this company these questions:

"Adjacent to the proposed site of the detention facility, as I understand, is his property."

You understand wrong. He owns lad nearby, but not adjacent, to the proposed site. It is not even on the same road. Angle tells me that whether a detention center goes there or not, he does not believe it has any impact on the marketability of his land. It is farmland, and as Angle told me, "The corn ain't gonna' know they're there." Although he would be allowed to cast a vote, he abstained from any vote in this matter.

Angle and Stoffa will be there tonight. I'd like to go, but have committed to a ZHB meeting in bethlehem.

OK..I stand corrected and now we move forward with the issue at hand. Too bad you can't attend this meeting..more to come I'm sure.

Anon 10:49, What disturbs me about your link and many of the others is that they come from sources with an agenda. In fact, a lot of these claims of abuse come from inmates looking for a buck. i know of no prison that is immune to these claims. Having said that, I think it's important to pay attention and try to determine the frequency of these abuses.

Dave, I wish I could go. If you have a few minutes, please give us a report tonight. How many people? Rambunctious? What does GEO say about the allegations of inmate abuse? How many jobs? What will they pay? Did any Supervisors chime in?

I will take notes but I don't have the INFAMOUS FLIP CAM! I'll post around 10 pm. Do I get a story line credit/byline? The truth..and only the truth! HA!

Dave, I'll take your comment and post it as a separate blog. It's an important story and I wish I could be there. I thank you for whatever you can tell us.

Here we go ..GEO called it a night at 8 PM sharp amid howls of complaints yet unanswered by the citizenry present. A lot of rude folk despite the BASD super asking for civility and written questions from the audience. Ron will be on the local news at 10 PM as they were interviewing him as I exited. Sat by Bill White the MCall blogger. I estimated the crowd at 300 or better. The GEO show was glossy and high tech and they did answer the big questions and you can tell they have done this alot. The ACLU contingent handed out flyers and urged people to call ALL their local gov't rep's and say NO to this project. Gracedale petitions were everywhere but they were polite in asking for signers as well as a guy selling NO PRISON signs for $10 outside the doorway to the parking lot. I want to hear more..a lot more before advising anyone how this goes down. Good and bad in any endeavor. Political activism alive and well in the Slate Belt. Hang on..it's gonna be a bumpy ride.

Page two..Did not see John Stoffa there and not sure about the Twsp. supers as I only know Ed Nelson on sight. All local construction crews to be used at union scale. 300 officers and another 200 support staff at prevailing community wages..whatever that means? Use local vendors and attempt to hire from the surrounding area where possible and qualified. They admit the abuses do occur and they have paid heavy fines. They have some baggage in other words and say they are improving as they grow. They said also that they will be giving the public access to communities that have similar facilities..phone numbers and contacts for anyone to call and ask about GEO and how they feel about them. Ron took some shots from the crowd at times but did not respond or acknowledge the hecklers.

What will happen has been chronicled in other area's. When the over 200 illegals are there their "families" start to filter into the area.

The baby momma's with the anchor babi's the relatives. They take over towns like they have up in Shenandoah. Soon the Anglo's are out-numbered and the businesses dry up. Has happened before.

The "officers" are minimum wage untrained people who couldn't guard a sleeping dog.

This operation has been a disaster for many area's. Check out the information on the net.

Feel sorry for my Slate Belt brethren. This would be a disaster for the area in general and the slate belt in particular. Of course Angle will be fine on his private million dollar highway estate.

First we sell out the seniors to an Arab sheik and now the Slate Belt to illegal aliens. What will they sell next?

Stoffa was there for the entire session.

Hey 12:45, do you like the kool aid they serve. Did you know that everywhere these prison go the streets turn to gold and you piss lemonade.

tis' called sarcasm
Another Brick in the Wall
I mean
nail in the coffin
that will be Angles career as a self serving public servant.