Is Elliot Sussman Being Groomed as New Medicare Czar? 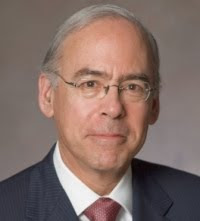 I had a perfect opportunity and blew it. There he was, sitting right in front of me during a ZHB meeting in Bethlehem, and I just let him go. Dr. Elliot Sussman had just stepped down as top dog at Lehigh Valley Hospital, and I did not even know it. He certainly did not act like a big shot. For one thing, he quietly waited his turn. And when it was, he sounded like most fathers, hoping that converting the space atop his garage into a "guest home" would attract his adult children.

I let him get away.
OK, so we all know that Dr. Sussman stepped down at LVH? Suddenly. No mention is made of future plans. That's what happens when people are fired, but Dr Sussman was not acting like a man who had just been fired when I saw him last week. In fact, two physicians from different states tagged along with him.

I think he's going to Washington, and is keeping quiet about it until background checks are done and Senators are on board with him as a replacement to a beleagured Dr. Donald Berwick, who heads up the $700 billion per year Centers for Medicare and Medicaid Services (CMS).

Dr. Berwick's favorable comments about government-run health care in Britain, combined with claims about rationing health care services and disparaging remarks about the importance of the doctor-patient relationship, have him in hot water with Republicans. In fact, President Obama used his "recess appointment" tool to delay a contentious confirmation hearing. And now, Dr. Berwick runs from reporters.

Since he'll never be confirmed, why not replace him with someone Republicans actually like? That's where Dr. Elliot Sussman comes in.

The ex-LVH chief was at the White House, back in March, for a panel discussion with President Obama about health care reform. He was there when the Bill was signed into law. He's told the Greater LV Chamber of Commerce that he believes in a more gradual approach to health care reform. Although Dr. Sussman contributes primarily to Republicans, he contributed to both John Callahan and Charlie Dent in the most recent election cycle.

Ahoy Captain. Take a look at your new ship. We've named it the Titanic. Would you like to view the deck chair arrangements?

Wow, Elliott as the new Don Berwick. Bernie, if you call this one correctly, you are The King. This one isn't on anybody's radar screen. Seems like a bit of a stretch, but I'll be the first one to congratulate you if you are correct. On a related topic, did you hear that Joe Lewis is being considered for the Secretary of Education and Angle for the Ambassador to France?

This is a very interesting idea.

Elliott is a smart man. I'm sure that he has thoroughly thought through this move and will land on his feet.

"Angle for the Ambassador to France?"

"This one isn't on anybody's radar screen."

Bernie,
Despite what these other "experts" say, I maintain that you have a very, very, reasonable hypothosis.

When you contribute to both candidates in a two candidate race, you are nothing but a hedger.

Who the hell wants a hedger in charge of fixing something so screwed up God himself would struggle with it?

Yawn! Yawn! BTW - is that a one bedroom house?

Don't confuse a hedger with a pacifier.

It is an oxymoron that this past CEO of LVHN would flip to the other side.

But I guess hubris and power are the devil's fairy dust. Poof!

You must be kidding! Sussman interviewed my son for Yale. The first question he asked was, "Do you believe we should have universal healthcare?" My son answered, "Yes, we're the only developed country in the world without it." Then Sussman yelled, "You're wrong! The American people would never pay for it!" Absolutely the wrong choice, the wrong direction.

Time will tell if Dr. Sussman's legacy at LVH will ultimately be positive or negative relative to its effect on the Lehigh Valley. However, one perspective I have heard frequently is that Dr. Sussman did incalculable damage to LVH and to healthcare in general in the Lehigh Valley. He ruled LVH by fear, and sought to destroy (rather than persuade) anyone who disagreed with his 'vision' (which was never quite apparent to neutral observers). IF this is so, Sussman represents absolutely the worst kind of hospital CEO possible: a physician-sociopath, who damages those around him. Some of the past actions of LVH management just coming to light now appear to confirm this impression. Using stun guns to subdue unruly patients may be just the tip of a very large iceberg of malfeasance.

To suggest that such a person would be an appropriate appointment as head of CMS is horrifying. Fortunately, President Obama has proven very careful of his appointments, unlike his predecessor.

PS. Another disagreement with Dr. Sussman: the American people are already paying more than it would take to cover everyone. The waste in the current system (not including inflated salaries paid to hospital and insurance company CEOs unworthy of their positions (which might cover quite a few of the uninsured) is enormous and insupportable. Healthcare needs to become a public utility and stop masquerading as a business--activity which has largely deprofessionalized caregivers by turning them into bean counters and paper pushers.