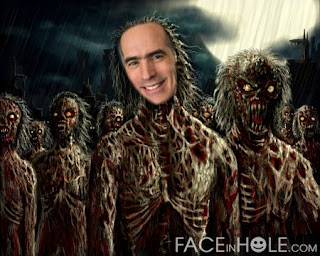 The Morning Call's Nicole Radzievich, in a Sunday news account, indicates that the Charlie Dent returning to Congress is going to be a much more powerful member for two reasons. He's got seniority and he's in the Majority.

There may actually be a third reason. Rumors are swirling that Dent plans to challenge Bob Casey, Senate Zombie, in 2012. I have no idea whether there is any truth to these rumors, but have long thought Dent is ideally suited to the U.S. Senate.

Good! He will leave the House and lose the Senate. He can then go back to selling televisions.

Sen. Casey rambled on for about half an hour without saying anything meaningful (at least as far as I could tell). He took a couple of questions from employees and said a lot of words without actually answering the questions. Instead of taking policy stands, he preferred platitudes like "we need to create jobs" without suggesting how he would go about doing so.

When Rep. Dent came two weeks later, I expected a similar performance. I was delighted when he skipped prepared remarks and went right to Q&A, answering thoroughly and concisely, giving time for many questions to be asked. Although he sidestepped a couple of them, he answered most forthrightly, taking firm policy stands and acknowledging the difficulties we face as a nation.

Although I was already planning to vote for him, I walked away from that session quite impressed. I hope he does choose to run for the Senate; I'd vote for him over Casey without hesitation.

I don't really think that Dent could win a state-wide race, but anyone is better than Casey. Casey's as dumb as a box of rocks.

But, yet Casey has the name recognition throughout all of Pennsylvania. It would be too tough for Dent to overcome.

Casey IS dumber than a box of rocks. But he is a Democrat in a blue state, and has a last name which resonates in Northeast PA. I was talking w/ 2 high profile local Democrats and when Casey's name came up, they rolled their eyes. However, because he has the right party affiliation (in their minds) they'll support him no matter what.

Charlie Dent would be a great Senator for Pa, as will be Senator Elect Toomey. The Republican Party got both elected, now they need to do same for Allentown and not write it off,that is the way it seems each municipal election.

Dent went right to the Q&A as he has nothing original to say!

And you stated he "sidestepped" a couple of them because he has not an original thought and is not a leader.

I guess you could say he is simply just another politician, but from the Lehigh Valley.

I was there also. Dent acted like a class clown. That's fine for your local rep but not if you plan on being Senate material.

Casey on the other hand was very articulate and deliberate with his words. He did not say as much but he was clear on his positions including some unpopular ones including Natural Gas extraction from shale legislation and the corporate income tax rate.

I have to respect that.

Lets drop the insults and deal with political realities.
Bernie, I respectfully disagree with the Dent for Senate idea, at least in 2012.
I could see it for sure in 2018, when Bob Casey runs for the job he really wants, Governor. That is the long term endgame for Bob Casey. Look on the bright side, Bob Casey has no sights on running for President. Be Thankful for that!

Dent would have no chance running for Senate. Toomey barely squeeked out a win and LV statewide candidates have not done well. Two senators from our region is a pipe dream.

That would be a good idea for Charlie to go for Senate. Continuous growth and change. He cannot sit as congressman after this term.

" Two senators from our region is a pipe dream."

I doubt that anyone as smart as charlie will give up a sure reelection forever in the house to take on Bob Casey..he'd be crazy..

Given the tune of the GOP lately, I'm not sure Dent wins a statewide primary. He's pro-choice, has a history of being friendly to the LGBT community and is a professed moderate. There are plenty of Toomey activists that would run at Dent in a heartbeat in the primary.

As far as Casey, my guess is that Casey is now the most powerful politico in PA. He has his base of Conservative D's. He has Rendell's power network after winning big in 2006. He has the Casey brand. He has carved out a relatively non-threatening political center that Dent has tried to carve out for himself in the 15th District.

If Dent is smart, he stays in the house for a while, builds power as a ranking member (becoming the LV's version of the late Shuster) and waits until the right opening (governor or senate should Casey opt to run for governor or Toomey opt to not seek a second term). Dent is smart, so looking at 2012-2016 will mean little movement from him.

Casey is combination of liberal, pro-life, and Democrat. That's tough to beat in PA.

And Casey proves that all that money can't fix speech problems caused by slipping dentures. It hurts to watch and hear him speak. I wonder if it hurts him, too?

Senator Casey isd proven as a Senator and has done remarkably well. There is no controversy surrounding him and he comes from an area that truly backs their candidate. Also, he is proven several times that he can win state-wide. Dent had trouble winning in his district, and yes, he was fortunate to be in the House for 6 years so his kowlege of the issues was better than John's but he does act like a clown at times.

But that wouldn't help Dent much. A pro-life R against Casey would make more sense.

With all his clout, I hope Dent can get the RNC to pay its $36K debt to Quakertown for the cancelled McCain Palin event. The event was cancelled due to poor weather, but the advance team contracted by the RNC damaged the field.

Either the charges should be challanged or the debt should be paid.

I bring this up for two reasons. Firstly Dent made an issue of the Clinton debt. Seceondly, the RNC raised a substantial sum of money.

Anon 5:19 - what exactly has Casey done "remarkably well?" I don't think he's done much of anything at all.

Dent is thoughtful and pragmatic - two things lacking from the vast majority of politicians at ANY level of government.

He'd have a tough run statewide, but he's had tough races in every race he's run. If I have to bet for or against Dent, I'd bet for him any day of the week.

Anon 7:48 - have Q-town officials tried contacting the RNC? I haven't seen anything about it. Seems pretty sketchy of you to bring that up in this forum before anything has been made public..

I read a paper today that stated Senate Republicans suggested that Obama's chance in 2012 will be based on National Security.

Interesting how Dent recently voted against the Spy Funding Bill just a few weeks before the air cargo package scare. Some suggested we are doing a better job of connecting the dots and reacting but still have some intel gaps.

Now that a whack job like Toomey has been elected to the US senate, anything is possible. This guy makes Rick Santorum look like Karl Marx!

In 2 years Karl Marx could win the Presidency! Tax the workers !

Well maybe Dent can make a name for himself getting rid of all those regulatory burdens on the million dollar plus small businesses out there. Child labor laws? Get rid of them. Clean water? Its cheaper for corporations to just dump toxic waste into the streams and rivers. Free them of their onerous govt. burdens. Clean air? Spew the poisons unfiltered into the air.
Gee its starting to feel like China about now.
OSHA inspectors?? a regulatory nuisance. Food inspections. Awe come on, Tyson Foods wont let the rats eat all of their chemically treated chickens.
Why should hamburgers only consist of 14% meat? A little bit of saw dust never hurt anyone.

Like Pip said to Joe in Great Expections, Oh Mitch McConnell and Dont cry for me Mr. Boehner, what larks we will have devastating the landscape for their monied overlords.

Charlie will fit right in. He can be the moderate voice. Put the vicious campaign mode on hold till the next gerrymander I mean redistricting. By then Toomey will have solved unemployment, the deficit, and world peace.