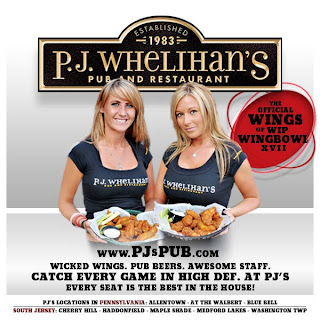 If you like buffalo wings with Shanghai sesame sauce, you're in luck. A new PJ Whelihan's is coming to 3395 Highpoint Blvd in Hanover Township, possibly as early as March. Accompanying the wings will be 45 jobs at the site of the old Bennigan's, a 7,200 sq. ft restaurant that can handle 210 hungry customers.
PJW Restaurant Group CEO Bob Platzer was at a Hanover Township Supervisors' meeting on November 23, to seek their approval of a liquor license transfer for what will be his 14th restaurant in Pennsylvania and New Jersey. He describes it as a family restaurant serving burgers, salads, wings, dinners and the occasional alcoholic beverage. Asked if he could operate without a liquor license, he said "I could but I wouldn't."

Supervisor Glenn Walbert expressed some concern about music bothering nearby residents, but Platzer assured him it would be "laid back music." No bands.

He did acknowledge that, later in the evening, "It gets younger. Old people like us are at home."

After receiving unanimous approval, a Hanover Township resident in the peanut gallery was unable to resist blurting out, "Welcome to the neighborhood!"

In other business, Recreation Director Cathy Heimsoth was complimented by Supervisors for her $910,000 budget. Chairman John N. Diacogiannis was impressed that it was a zero-base budget. "I know it's very difficult to do," he said, but indicated it's really the best way to assess financial need.

Heimsoth stated that she hoped to see more programs at the pool in 2011. That prompted Supervisor Steve Salvesen to make this comment about colleague John Nagle: "I'd pay big money to see him in a pair of spandex."

Are those waitresses coming too?

I'll have to try it.

Let me know when you are going, I will meet you there.

Let me know when you are going and I will meet you there.

Sounds good. I'll post a blog when it opens.

PJ's??? Trust me great food and even better things to look at! I been going to the one off of Tilghman St. for years! You won't be disappointed.

Now I might just have to go the one out there. Maybe I'll take my grandson there on Friday.

Taking your grandson for the wings or the sights?

8:41 reminded me of the Hooters/baseball parent post back in the summer ;).

Seriously, this is really good news. Outside of the Keystone Pub, they're the best wings around.

He's just 11, so he's going for the wings. He loves wings. I'll take him there sometime Friday.

Don't kid yourself. At 11, he's beginning to enjoy racks and ribs.

Go for thew Hot and Honey my fav.

"Don't kid yourself. At 11, he's beginning to enjoy racks and ribs."

I see no evidence, but you may be right. Maybe I should clarify. I'll be going for the wings.

I wish they would open a Hooters in the Lehigh Valley. It is about time.

A little pricey, but very good! I'm glad one will finally be closer to my house!

It's March, when are they opening? I figured in time for St. Patty's day but I haven't seen any activity there.

I know it will be soon,. The weather held them up a bit.