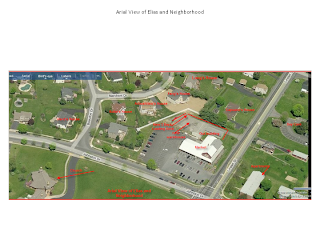 In an exhaustive and well-reasoned September 30 opinion, Northampton County Judge Edward Smith has remanded a zoning dispute between a busy Bethlehem produce market and some of its residential neighbors. In forty-four pages, this scholarly jurist told them to go back to the drawing board, although he did affirm some important variances. He's really urging both the Elias family and nearby homeowners to sit down and listen to each other, if that's possible. But it's beginning to appear that Bethlehem's Zoning Hearing Board, a supposed quasi-judicial body, is assuming the role of litigant.
Before Judge Smith issued his opinion, ZHB Solicitor Mickey Thompson (whose daytime job is Abe Atiyeh employee), pressured him in a September 17 letter. Mickey complains that the ZHB was publicly chastised by the Planning Commission. He even whines that City Council would expand the Board from three to five members, all as a result of their 2-1 decision.

Both of these claims are untrue. The Planning Commission has never been critical, and City Council's decision to expand the ZHB was in the works for several years. But it's obvious that Bethlehem zoners feel victimized.

On remand, a Hearing was originally scheduled for November 3, but some members of the Elias family were away on vacation. The Hearing was set up for this Wednesday and notices went out. But Bethlehem City Council's Solicitor, who had intervened in the matter, was unavailable that date and asked for a continuance.

On Friday, Judge Smith was asked to grant the continuance, but he's surrendered jurisdiction back to the Zoning Hearing Board and has no authority to entertain such a request.

When the ZHB ruled against Bethlehem homeowners in Round One, there were several snarky references to their failure to obtain an attorney. But this same body is now willing to deprive the entire City of Bethlehem of representation. This is no fault of the Elias family or the Bethlehem homeowners involved, but they could both easily be adversely impacted by a ZHB that seems to have forgotten it is a neutral and detached body.
Updated 10:15 AM: Looks like Bethlehem City Council has postponed one of its own hearings, ant that its Solicitor will now attend the hearing.
Posted by Bernie O'Hare at 11/08/2010 12:00:00 AM

Mickey Thompson is a nasty person who is out to hurt the Elias's residential neighborhoods because it has gotten personal to him. He works for developer Atitah!! He is hurting the residents and the ZHB. Shame on you Bethlehem and John Callahan for hiring a man who is so closed minded!! He doesn't care about Bethlehem and further he doesn't even live in Bethlehem just like Gus Elias. Why should they care about creating noise, polution, filth, and a tractor-trailor depot in a nice residential neighborhood. Put that commercial-looking distribution center in their backyards and then you'd hear them. Elias doesn't need over 19,000 sq ft to make his store run smoothly and efficiently, he wants to run a distribution center in an RR ZONE!! OPEN UP YOUR EYES EVERYONE - HE IS BEING SHREWD!!

Callahan did not hire him. He has been solicitor for the ZHB for years.
He may have been first appointed under Ken Smith, but definitely not by Callahan.

I don't want to slam Mickey Thompson. My concern is that, for whatever reason, it certainly is beginning to appear that a neutral and detached body has taken a side. And that's bad for everyone, even the Elias family.

I wish you knew what the hell you were talking about Bernie... also to Anonymous... Mickey Thompson LIVES in Bethlehem, and he has for YEARS, and as for the 19,000 sq ft, the judge said that they can do that.... and he upheld that part of the neighborhood association (all 3 of them) appeal and they lost... many times over...

"I wish you knew what the hell you were talking about Bernie.."

Let's see. Mickey Thompson sent a letter to the Court with several misrepresentations, although I do not think they were intentional. He did make remarks at the first hearing about homeowners not having a lawyer. He now, on behalf of the ZHB, denies a continuance request from the Attorney who really does represent Bethlehem. Under these circumstances, it is fair to question their impartiality.

Umm, I believe this is just one case, am I right? What, did the ZHB rule against them 20 times or something?