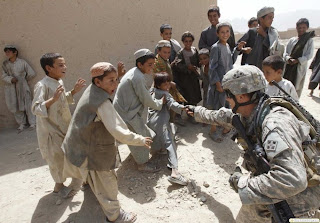 “Each November, America pauses to pay respect to the men and women who faithfully served in the U.S. Armed Forces. Our nation’s many veterans have bravely risked their lives to ensure the safety and protect the freedom of the American people -- for their sacrifice, we are eternally grateful.
"Veterans Day was originally recognized as Armistice Day on November 11, 1919, the first anniversary of the end of World War I. Seven years later, Congress passed a resolution to mark an annual observance to recognize the courage of those serving in armed conflicts. In 1938, November 11th officially became the national holiday that we observe today as Veterans Day.

"When we stop to pay tribute to veterans who have dawned the uniform of one of our military branches, we think of those in the Greatest Generation, who gallantly served in World War II; the young soldiers, including countless Marines, sent to Vietnam in the 1960s and ‘70s; and the men and women who have served multiple tours of duty in Iraq and Afghanistan during the global war against terrorism.

"One of my greatest responsibilities as Representative of the 15th District of Pennsylvania is to ensure veterans and their families have access to the resources and care they need and have earned. Over the last five years, I’ve had the opportunity to vote on measures in Congress that have brought added relief and assistance to local veterans and their loved ones. Since my election to Congress in 2005, federal spending on veterans’ health programs has increased by more than 60%. Additionally, in the last year, over $1 billion in education benefits have been provided to veterans, particularly those who served over the last decade, following the enactment of the Post-9/11 GI Bill, which I strongly supported.

"Less than a month ago, the President signed into law the Veterans’ Benefit Act of 2010 (P.L. 111-275) with my support. This measure will increase job training opportunities and other benefits for homeless veterans. It will also protect our troops from some unscrupulous business practices that previously took advantage of enlisted men and women who were given military transfer orders. Additionally, disabled veterans, as well as surviving spouses and children, will now see consistent cost of living adjustments because of this new law.

"Nearly four decades since the end of the Vietnam War, some veterans who fought in the conflict continue to experience health problems resulting from their exposure to Agent Orange, a chemical widely used during the Vietnam theater. Recognizing the impact of Agent Orange on our aging Vietnam veteran population, the Supplemental War Spending bill signed into law on July 29th 2010 provided $13.4 billion for claims in Fiscal Year 2010.

"On a more personal level, the Veterans Health Administration (VHA) recently updated its testing policy to integrate HIV/AIDS testing as a routine aspect of a medical review with the Veterans Affairs Health Care System. I proposed this modification during consideration of the Veterans Mental Health and Other Care Improvements Act of 2008 (P.L. 110-387) and fought for its inclusion in the final version of the legislation. My proposal repealed the VHA’s outdated HIV testing policy, allowing quicker diagnosis and more effective treatment.

"When the 112th Congress begins work in January, I anticipate additional opportunities to address the many important issues facing veterans in the 15th District. In the New Year, I will continue to help improve and streamline federal programs that provide assistance to our greatest American heroes and their families.

"On this Veterans Day, I want to call your attention to the Veterans History Project, a remarkable initiative operated by U.S. Library of Congress. The Project collects first hand accounts and stories from veterans of World War I through today’s conflicts in Iraq and Afghanistan. Each unique story recorded and preserved through the Project serves as a tool for teaching future generations about the countless Americans who fought in defense of our nation.

"As we remember those who served this week, we must keep the troops currently stationed in Iraq and Afghanistan, as well as the men and women stationed in other parts of the world, in our thoughts. I have visited our troops in the Middle East and south Asia on several occasions over the last few years. It is always a distinct honor to spend time with Pennsylvanians faithfully serving in the war against al-Qaeda and other terrorists determined to destroy the American way of life. While some may pay the ultimate sacrifice for protecting our nation, others will return to the United States to begin new lives as veterans. Like many Americans, I am grateful and humbled by their sense of duty and will continue to ensure they receive the best possible care.

"This Veterans Day, I encourage all Americans to take a moment to thank a veteran or current member of the Armed Forces for his or her service to our nation."
Posted by Bernie O'Hare at 11/11/2010 01:00:00 AM

Thank you to all veterans. I'm humbled by your service.

Charlie Dent, however, should describe what victory in Afghanistan looks like so we'll know when it's time to leave.

Thank you to all Veterans since they are the very reason we have this privilege of freedom of speech.