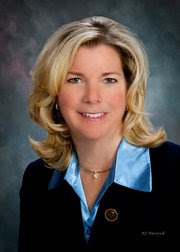 What has happened to former State Rep. Karen Beyer, who was upset last year by Justin Simmons?

She's become a lobbyist, effective 2/20/11, with T.J. Rooney's Tri State Strategies, and is likely making more money and working less hours than she did as a State Rep.

I mention this because I wonder whether State Rep. Jenn Mann, who has announced her own retirement from politics, is thinking about something along those lines.

"I've never been known as a person who dodges a question, and never will be," Mann told me over a year ago. But when I asked her to tell us how much money she gets as a consultant for Vitetta, that's exactly what she did. She refused to answer, telling me she has no legal obligation to disclose exact amounts.

Many of these jobs are awarded by the state's Department of General Services. Until sometime last year, that office was run by Lehigh Valley native and friend James Creedon. He also served with Mann on the Stimulus Oversight Commission. There, they both get a head's up on where the state intends to spend federal stimulus dollars.

In addition to her Creedon ties, Mann actually dated Sean Pressman. He was Chief of Staff in General Services between 2/1/06 and 6/19/09.

Did Vitetta benefit as a result? I'm certain it's one of the reasons they wanted her.

Annual statements of financial interest for the past four years (2010, 2009, 2008 , 2007) reveal that Vitetta has been paying Mann, although the amounts are unstated.

In her defense, Mann did get clearance from the state ethics commission. She was warned against using her official position to solicit business. My concern is that no matter what she says, her elected office in and of itself is a form of pressure.

Mann tells me that precisely because of that "very fair concern," she stays away from all the local governments. "It's just not worth it," she said. She concedes that she may "have reached out to some regional school boards," although she does not make the initial contact.

Gee, how would you like to be an Easton or Bangor school supervisor who gets a call from Vitetta telling you that State Rep. Jennifer Mann would like to talk to you about the engineering firm you hire for your next middle school?

Let's face it. The not-so-subtle pressure of her powerful public office, in and of itself, should rule out this kind of moonlighting job.

Will Mann be working full time for Vitetta now?

Major blemish on a fine public perceived record. Does she need the money so badly ? What a piece of poor judgement.

Reality Check. The only reason she is contemplating retirement is because of redistricting. She will be in a primarily very heavy Hispanic district. There are already Hispanic groups getting ready to field a high profile hispanic candidate in a targeted reapportioned district.

Mann would lose in the primary. So she is looking at cashing in the fat state pension and benefits and going with a consulting firm.

Bernie
So glad you're writing about Mann.
If she goes to work for Arena owners she will make all government officials look bad! Whatever happened to being a good and honest public servant?

What voters should really demand
is that no elected official be allowed to have a spouse who lobbies. Here in the Lehigh Valley we have a big time VIP whose wife is just that and no one says a word. How come?

Bernie
Interesting comment on the large Hispanic vote in Allentown. Hear a certain academic might throw his hat in the ring. Now the fun begins
with two open seats in the city.

She's a typical, sleazy politician who holds taxpayers in contempt and is now going to get paid for all the aggravation they put her through. What a complete POS she is.

Mann was safe in this seat. It's strongest voter block was west end well-to-do's who love her. A strong latino not named guridy would be a welcome fit. Keep in mind that city council has one latino and that an attempt by mota was quashed by a 90 year old who basically did nothing to campaign.

Take the money and run

Does she not get her salary for the REST OF HER LIFE since she is retiring from public life?

And how much is that exactly Bernie?

Bernie
If it's true about lobby-related
spouses and maybe you can find out, all voters should demand Harrisburg revoke that option.

What is Mann's pension? Is it for life?

" Here in the Lehigh Valley we have a big time VIP whose wife is just that and no one says a word. How come?"

You are talking about Senator Browne. I wrote a blog about that, and agree it should be illegal.

"Does she not get her salary for the REST OF HER LIFE since she is retiring from public life?"

Yes. I'll try to find out how much.

I know we will really miss her, she was nice and I know she really cared about Allentown.

Thanks to Bernie for doing real reporting on this while the Morning Call basically just gives her a fluff piece on how great she was!

To answer a question of another poster - Mann will get her states pension for the rest of her life!!

Bernie, You are truly a hero to the people of the Valley!!!

Whoever she was, she was the best. I plan to support whatever Democrat replaces her.

When is the first hockey game?

Mann was toast for the new hispanic candidate in the new district. you Mann fans are funny.

So ... lobbyists are a big part of the problem we have in government these days, but going to work for a lobbying firm (or starting one) is not an unusual step. You mention TJ Rooney, but don't forget about Joe Uliana who was an elected official for about 5 minutes before he lost an election and set up his lobbying shop. None of this is any good, but Mann is not much different than the others.

And yes, she was paid by Vitetta while a Rep. This is also not good, but apparently not against the rules. How is this any different than Charlie Dent taking big contributions for B Braun Medical and its executives and then voting/lobbying on their behalf? While btw, Dent is still getting his publicly funded health insurance through the State of PA when he could/should be getting it via his current position.

At least she is heading out to the private sector, unlike Craig Daly and Doug Reichley who both collect a lifetime pension AND still work for the State. And correct me if I'm wrong, now that they are judges, they will be eligible for another taxpayer funded pension. Neither has really practiced law for some time before being elected, so one must also question if they are worth the $170 + benefits they receive.

This is something Bernie had nothing to say about in the past. All I could find in the archives is this: http://lehighvalleyramblings.blogspot.com/2009/02/craig-dally-to-announce-judicial-quest.html

The point is that the whole system is bogus and designed to keep on giving to those who are elected, be it inside or outside the government. Be it as a "consultant" or "lobbyist" or elected to something else, we have a class of people who wield power and influence who, quite frankly, couldn't hold a job in the private sector if they had to.

Bureaucrats are the bomb.

You're just jealous of their ability to fleece the multitude of dunces and dupes some idiotic people continue to call educated and informed citizens, Publius.

You people are all idiots. Jenn Mann's decision will be good for her because she is getting out of the political cesspool, inhabited in part by people like all of you, while she is still able to go back to the private sector (where she started) and make a decent living. Her gain is Allentown's loss no matter how negatively you trolls try to paint it. As for her pension? She earned it. If you don't like that fact tough sh**!

Oh Petey, you devil you.

"Mann was toast for the new hispanic candidate in the new district."

Laughable... who is this hispanic candidate? Allentown has one hispanic in office and he almost lost in his last primary.

Ideally, a strong hispanic emerges in Allentown, but none of the election results over the past decade indicate that such a thing will happen. I want to believe, but at this point, I'm not believing.

The strongest candidate would be Dan McCarthy, but he's not a good campaigner. Still, in this seat, he has the gravitas that none of the other potential candidates have. The question is whether he wants to leave a job as an attorney. He likely gives up some income if he is elected. Schlossberg is young, has shallow roots and is inexperienced but is the best campaigner of the people living in the district. Eichenwald would be an interesting candidate, but she just doesn't have the chops to make it a real run. Guridy will probably run and it will be comical.

It wouldn't shock me that she's getting out before the storm hits. Politicians just don't decide not to run again for an office that's yours for the continued taking unless you're running away from something larger than your ego.

I think the lobbying for Vitetta is the tip of a larger illegal iceberg because Vitetta itself, is no saint.

Lou Hershman should consider to be a candidate with the support of Mayor Pawlowski, he would win in a landslide.

Does she still swim in both ponds?

Most of your commenys are from ininformed boobs.
Almost all the Hispanics were moved into the transported from Pittsburgh state house district 22, which Pete Schweyer will win easily.
Julio Guridy has a snowball's chance in hell of winning the 132. It's lily white and 60% D.
Go look on the redistricting website and zoom in on the map.
You should be thanking Jen Mann for 14 years of service. Maybe she's tired of all the back stabbing political games of dealing with political extremists in both parties.
She's moving her life in a new direction and we should all wish her well.

Funny how the Democrats pushed for a "Hispanic district" for Allentown and conveniently had the district gerrymandered to include Schweyer's home.

Just like the Democrats - tell a group how much you care about them and then stab them in the back. Classic!

sounds like chris m is at it again, attacking the public pensions, when he collects his pension from the school district.. Jenn is a wonderful person, she did a lot for the city of allentown. Just bc she is a dem you shoot her down.. give it a break!

casey is a lovable wacko.

On the gerrymandering issue: Reality check people! Dems had zero to do with redrawing the districts. That process in Harrisburg was completely controlled by the Rethugs. So how is it that you believe that the Dems were able to draw a district that favors Schweyer?