Following the Money in the McClure, Connolly Race 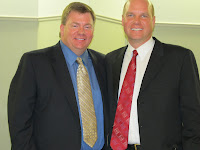 Pre-election campaign finance reports were due on Friday. Here's how the money looks in the County Council Nazareth-area race between Lamont McClure and Matt Connolly.

McClure raised $10,050 during this reporting period, giving him a total of $23,485. Nearly half of his money - $7,900 - came from unions, including the Asbestos Workers. He also picked up $1,000 from Nazareth's Rodney Applegate. He also accepted a $1,245 in-kind contribution from former Council member Charles Dertinger, for one of his three or more robocalls.

So far, McClure has spent $23,485 for at least two mailers, one of which is a hit piece on his opponent, Matt Connolly.