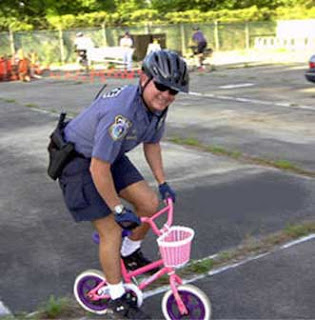 At the time of his original proposal, Stoffa estimated the County would need $7.2 million to fund Gracedale next year. Since that time, the private management firm hired to manage the nursing facility has told Council it can trim $1.6 million from that figure.

Another big ticket item is $1.8 million for a West Easton DUI facility and treatment center, to be leased from developer Abe Atiyeh. Most of that sum includes start-up costs. As explained by Stoffa, the goal is to reduce recidivism, and the County's bottom line in paying for the back end of crime. "The idea behind West Easton would be more treatment, more drug and alcohol involvement because 80% of the people in the County jail have that problem. The West Easton thing is a philosophical change in how we treat people, and it's an alternative to building very, very expensive jail cells."

His run for county executive begins.

but it's over already

And we thought Ron was gone.

The County budget is as tight as a drum. Any attempt to cut it substanially is irresponsible..If Cusick thinks this we'll help his bid for County executive , he's nuts..He'll be lucky if he gets elected to Council again, especially due to his opposition to Gracedale remaining public and his virulent anti union comments..Hopefully the new Council removes him as President of Council because his views obviously aren't in sync with the newly elected members or his county constituency..Stoffa is right on this budget and Cusick isn't..

Will executive Stoffa's budget be available for the public to see? There is probably not much that can be trimmed.

Stoffa's proposed budget is published on the county web page. It has been there since he proposed it. As soon as you get on the website, you can see a link on the right side of the page.

Fiscal responsibility is often thrown around when speaking of the county executive yet he casually pisses away MILLIONS on something as nebulous as "open space."

Cut taxes, cut services, but buy land the majority of county citizens will never see nor have any desire to ever see. Parks? Yes. Farmland? No.

In a 2003 referendum (this one was legal), NC voters overwhelmingly voted to authorize Council to borrow up to $35 million for open space. Instead of doing that, which would involve costly bonds, Johns Stoffa proposed a half mill tax increase for pay-as-you-go. He proposed this before he ran for office, and as he likes to put it, voters elected me anyway.

Voters have had 2 chances to shoot down open space and have instead embraced it The plan proposed by Stoffa is responsible and is what the people have made clear they want. I will quibble about specifics, but not with the principle.

That's fine. But in the grand scheme of things, open space is a waste of taxpayer money and should be the first thing cut. Otherwise, the taxpayers should keep their mouths shut about tax increases and your boy Stoffa should say that.

Right on Bernie..The open space plan, just like the Gracedale initiative, was approved by the voters..Money was set aside and council should stop trying to undermine that and Gracedale..

Open space is a scam that enriches a small group of property owners and improves wealthy developers' portfolios by making available space more scarce. It's a big win for the already wealthy at the expense of the overwhelming majority. Voters are stupid. It's why unsustainable Gracedale is still an open, bleeding sore. It's all a shell game using the same money.

And if you consider that the "Majority" was only maybe 20% of the registered voters.

Can you say Voter Apathy?

The big problem with all of this is that even though 80% of prison inmates are there on drug related crimes, not all would be appropriate for a drug treatment center or work release.

Neither the DA nor any judge will allow a violent criminal or one with a long drug crimminal history to go anywhere but jail.

My problem with this entire debate is the same problem that existed with the Gracedale debate. Unchallenged statements and presumptive facts.

Neither the County Executive nor the County Council has any control on where criminals will be sent. The DA and judges make that call. So of the 80%, the number going to this new facility could be 20% or 3%, we have no idea.

The main point being this is no real "fix" to the prison problem. It is a "social experiment" that may reap benefits long term. The Executive himself noted he believes, "It is the right thing to do". That is not mandated service, that is a personal choice on his part that will become county policy. The lack of adequate prison cells must still be addressed. Whether this Executive wants to acknowledge that or leaves it to the next executive the problem will remain. Simply ignoring it and building a new drug treatment facility does not change that fact.

Why Bernie O'Hare needs to delete this type of policy discussion is beyond me. I may suggest that the reason may be partially why both the Gracedale initiative passed and Ron Angle and Mike Dowd lost. There are people in the community who question the statement of "all" elected officials, whether they are loved by the press or not. We do not want to be "lead" or "directed" to certain facts and have others deleted if they do not fit a specific agenda. People know when they are being sold crap burgers and they don't need some overlord to explain the difference. Bottom line is that even with this drug treatment contract the country must at some point address the overcrowded conditions at the prison that this program will not soon impact.

At this point in time we have lost an independent county council with the ability to intelligently question and challenge statements and so-called "facts" of the Administration.
I would enjoy any discussion on these points.

At this point in time we have lost an independent county council with the ability to intelligently question and challenge statements and so-called "facts" of the Administration.
I would enjoy any discussion on these points.

What do you mean by that Chucky? please tell us, your humble opinion, on the 3 new people and how they will not be an independent Council.

Not at all sure what the hell Chucky D was talking about or who he was attacking..For all I know, I might agree with him, lol..The subject was Cusick opposing a tax increase..Could someone please interpret his argument into plain English? All else aside here, the County needs this increase to function. The goal of Cusick and the Tea party folks seems to be a government that barely functions and is on life support. Therefore, it's then easier to eventually kill off..The residents of the County, for better or worse, spoke out loudly against that idea with their support of keeping Gracedale public and their ouster of Angle and Dowd..So my guess is that Cusick is trying to commit political suicide by trying to immasculate Government..So go for it Mr. Cusick..

Ahhhhh take away from Gracedale and the elderly that have paid to the county and give a TajMahal to criminals. Makes sense to me... NOT!!! Disgusting

I beleive the election of three new people is a reflection of the disgust people have with the current regime of Angle and Stoffa. If Stoffa had run this year he would have gone down in flames.

The main point is, now pay attention, there is a need to address the capacity at the prison. For six years Stoffa,Angle,Dowd, etc. have done nothing. This new drug treatment center is not a "fix" for an overcrowded jail. It is, just in fact a drug treatment center. Stoffa "hopes" it will promote a lower prison population but there are no guarantees it will.

Where a criminal is sent is determined by the DA and the Courts. It doesn't matter if Stoffa builds a 1000 bed drug treatment castle, the judges are not going to put many of the drug related offenders anyplace but jail.

Social crusaders like Mr. Stoffa and some others believe in drug treatment and rehabilitation; that is nice but it does not guarantee a lessening of the need for prison beds.

So the main point remains that one of the most critical responsibilities of the county continues to go unaddressed.

I beleive that what the COAF did in essence was amazing. Had the press done their job and reported on Stoffa and county council responsibly and not just parrot Stoffa and Angle talking points,maybe people would have voted different. But from out in the county the COAF was the only group bringing attention to a questionable county government and lazy press corps.

When I was young in high school in the 60's the hippies had their pot and acid. It was peace and love. They had their own clique and were non violent. There was a criminal element involved as far profit making on the drugs. However it was hidden.
Now these dealers are affiliated with gangs on the local level and violence is the norm. Most drug arrests also have weapons charges and or assaults associated with them . No judge who likes his job will be sending these mostly violent offenders to a treatment center. This place will soon become an annex for the general population in the prison.

As soon as the new section opened, the jail was at capacity almost immediately.

I seem to remember about 6 million blown on architect fees that were nixed.

Start writing to your senators to change the PA criminal code before we all start living in tents on pyligamist compounds.

Non violent people need not be sentenced to jail.

I know all you social engineers beleive that love and rehab is the key but judges will not allow violent or perpetual drug offenders go to a treatment center.

People want tough laws and they also don't want to pay for jail cells. This is remnants of the Reagan Rabble and the modern teabaggers. Throw them all in jail but don't charge me for the jail.
Cut government but not the part that helps me.

At the end of the day, the correct answer is due to Sate law, the jail capacity will have to be increased whether you want to pay or not.

Stoffa is doing his thing but it won't solve the problem. He is just going to let his successor deal with it. You want "ALL" drug offenders to go to treatment centers, then call your State reps and change the laws. Give you a hint up front, it ain't gonna happen.

hey there are 2 wings open at gracedale, maybe they should house them there! since you don't think gracedale should be a nursing home

I see our Repubs need to be against both. Must take the marching orders... Where's Clem?