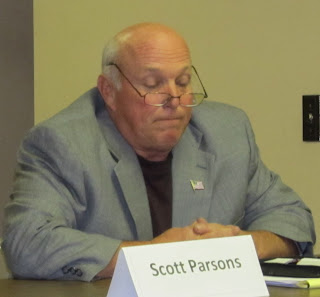 Right after being elected to Wind Gap Borough Council, he pushed for and got a $52/year EMT tax. At the time, his rationale was that it would ease the burden on homeowners. But that hasn't happened. Instead, real estate taxes have skyrocketed in from 6.25 mills in 2004 to 11.25 mills last year.

Parsons recently changed his webpage to clarify his views on taxes. He calls them "a long-term investment."  He goes on to state he's willing to make a "long-term investment" for programs like Gracedale, Open Space, Bi-County Health and County Parks.

Now since the County already sets aside a half mill of tax for open space every year, does this mean Parsons wants to raise them even more? And whether he knows it are not, county parks are included under open space funding. Does Parsons envisage a new, County Parks tax, just for places like Wy-Hit-Tuk Park?

Finally, Parsons is willing to increase your tax bill for a bi-county health department, even though he's never attended a single meeting about it.

You, Angle and the Excess Times called Stoffa's first year tax increase not really a tax increase but a fee for open space.

It was a tax increase. Every day Stoffa and Angle waited and let the swaption cost go up and didn't use tax money people already paid to dump the debt, they created a tax increase.

Yes Mr. O'Hare you can play games with terms and twist words but if Scott Parsons is guilty, then so is Stoffa and Angle and the King of tax increases Sal Panto.

Hey Bernie....do you own property in NorCo?

If Ron Angle is all about no tax increase and cutting spending... he has my vote despite his non diplomatic style.

"You, Angle and the Excess Times called Stoffa's first year tax increase not really a tax increase but a fee for open space."

This, of course, is bullshit. It was called what it was, a tax. In fact, Stoffa stated when he was running that he would raise taxes a half mill for open space if elected. And as he purs it, "They voted for me anyway."

At that time, the economy was doing well, too.

Now, in the dace of the Great Recession, Parsons is call clling for tax hikes for the following:

1) Gracedale, without knowing ehter private management has made any headway or trying to make a single cut or even talk to the unions;

2) Open Space, even though we already have a half mill tax hike for that.

3) Bi-County health, even though he has never attended a single meeting about it and has no clue what it entails; and

4) County Parks, even though he has already agreed to a second tax for open space, which includes county parks. This must be a third one.

In Scott Parsons land, Northampton County would face a 30% tax hike his forst year in office.

"do you own property in NorCo?"

I'll answer that irrelevant question when you identify yourself.

Parsons is a straw man for the union thugs.

Nice guy, but I'm afraid that's it. That's why union business agent Justus James was with him at the Slate Belt debate. That's why Parsons thinks tax hikes are investments.

If you want to cozy up to UN Agebda 21 pass another stupid open space act and preservation of farmland act and tax. You can find Agenda 21 if you google it.

Comment all you like Bernie.
Electing Parsons does not mean there would be a tax hike.
There would need to be a consensus among the council for that trype of agenda.
Ron said a 20% increase for Gracedale up to the May primary last week on TV he said 10%
Halloween is over scare tactics will not work.
The fate for Ron is sealed.
Parsons can't claim a win
however
Ron owns a loss
It is like the Gracedale issue
A REFERENDUM
by the thing Ron has overlooked
THE PEOPLE
He has sealed his own fate.

Funny thing is Angle claimed if Gracedale not sold we will need a 30% tax increase. If you claim that is what Scott says(which he never did) then he is just repeating what Angle claimed.

Does that make Ron Angle a liar?

Isn't Ron about to vote for a tax increase? How will he vote on the proposed budget?

stoffa has been in office 6 years and NOorthampton County wil finish 2011 without a tax increase in 7 years except for the pay-as-you-go one -half mil tax increase. He must be doing something right.

Vote for me I'm a genius no tax increase.
All I needed to do was eliminate 800 positions
Standing ovation.
So easy a caveman could do it.
BTW...he did

Stoffa inherited the largest cash surplus in county history. he has done nothing but sue the taxpayers.

He did one thing right and that was spending money that was already there.