I love reading Donald Flad's View Beyond Bethlehem. At one time, he was very active in local politics, something of a Kingmaker. But he gave it all up. That's not what makes me admire him. What I like is that Donald speaks straight from his heart, is himself and is brutally honest.

I wish he posted more often.

Now Donald may have pulled back from local politics, but he's still a Dem Committee member. He supported John Callahan's Congressional candidacy, too. He's not too crazy about the Northampton County Bulldog, either. So he and I have some major differences. But I'm always impressed by his reasoning, and there are always points where his thinking and mine overlap.

At the Debate at the Slate, I was astonished to see this Bethlehemite. He had been recruited to serve as timekeeper, and brought bottles of water for everyone. He has just posted his typically introspective account of that night. If you don't have time to read it in its entirety (which I recommend), here are some excerpts with bullet points about each candidate. 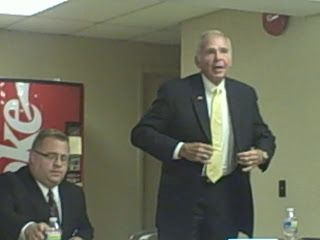 "Stephen Barron seems capable and by most news accounts runs a well operated department. But he also appears to be overly partisan, a bit of a bully, into power, very ambitious and kind of too slick & snarky by far.

"Stephen Salvesen is a man from a different era. He is tall, gray haired and very patrician. He had impeccable manners a firm handshake and looked me in the eye while speaking to me. Mr. Barron made fleeting eye contact and looked for someone more important (he clearly had no idea who I used to be). Mr. Salvesen is a retired businessman who seems to care about public service but at least on this night was clearly unprepared not only for the debate but for the position he was seeking. I lost count of how many times he said 'I don’t know'; he even said 'I don’t know what Mr. Barron does'. If Mr. Salvesen does not know what the County Controller does perhaps he should not be running for that office." 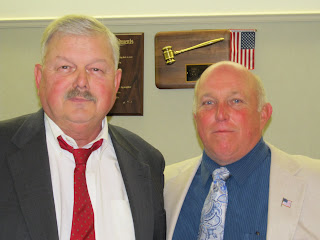 "Councilman Angle needs no introduction or description to anyone who follows local politics. People either love him or detest him and he is very proud of the fact that he is disliked. In fact he mentioned how proud he was throughout the hour. I have to say that I was expecting Mr. Angle to be a completely unhinged mad man and I was disappointed in his relatively low key performance. Yes he was a tad rude and yes he interrupted his opponent too many times and his side half mumbled insults were annoying but I expected horns and fire and what I got was a man who knows what he is talking about. I don’t like Mr. Angle’s style and I don’t agree with very much of his political philosophy but I have never met someone who knows the ins and outs of county government better.

"Scott Parsons is someone I could be comfortable voting for had he been better prepared for the debate and better informed about the issues facing the county right now. I liked his view of the role of government and his desire to bring some civility to politics, something Mr. Angle mocked constantly. The civility thing seemed to be the only issue Mr. Parsons seemed comfortable with and knowledgeable about. Ron Angle is a proven vote getter in that part of the county and it is going to take more than 'Can’t we all just get along' to beat him."
Posted by Bernie O'Hare at 11/03/2011 12:46:00 AM

I know Don from the old heady days of the Dem party before there was such a thing as a "Long Dem" or a "Callahan Clan". It is good to read his comments.

I will have to catch up with him sometime and shot the shat about the old days.

From one old pol to another. Old pols don't die, people just forget about us.

I really enjoyed Donald's Part One of this story. He is a terrific writer. Thanks for linking this!

Agree with above. McCarthy's campaign is rather negative for any candidate for judge. Not a big Reichly fan, but McCarthy seems like a sneaky SOB.

I think you mean "Salvesen"...I was excited when i read Severson in the headline. It was however anti-climactic when i learned the true subject of the story!

I believe Scott Parsons doesn't have it in him to be negative. He's been approached numerous times to hammer Angle over the head with all of this past year's missteps ( which were numerous) and opted mostly to go the positive route..Therefore he'll probably get his butt kicked in the election and many will say "three cheers for Scott for not going negative". So that means Angle will get reelected..My question to Scott would be, " why even bother to run in the first place if civility is all you are offering." Geez, Scott, wake up and run a campaign already!!

Who am I and what am I doing here?

Let me get this straight. Angle is a meanie. Scott Parsons is representing himself as the "civil" alternative. And you want him to get nasty?

2:47
You should run Herman Cains' campaign, he needs another anchor tied around his neck.
BTW straw polls in 4 tell a different story.

This Flad dude sure has Barron figured out. The guy is a legend in his own mind, just ask him.

Didnt say Scott should get nasty.. Said he should run a campaign mentioning all of Angle's negatives. Maybe he doesn't because there are so many to list that he'd appear long winded..

Don Flad is just an old politcal hack who is jealous of the new generation of Democrats like Steve Barron. Like it or not Mr. Flad, Steve is the future.

9:41 - Please tell us who you are. Hack is a term that was never used about me. Such an honor. It means I have had an impact.
Which Steve is the future? - Both candidates are Steve.
If someone who is afraid to declare who they are when they are a critic of me is representative of the new generation then I am glad I am an old hack.

If you truly believe in what you are saying.

If you truly believe what you have to say is valid then tell us all who you are.

Why are you hiding?

Are you ashamed of your own opinion?

Don has more class and ability in his little finger than Barron has in his entire tummy!