I Hid Out in Pottstown This Weekend

On Friday, I posted a story about an Office of Open Record's Order, requiring Northampton County Council member Tom Dietrich to produce a note (or a reasonable facsimile) that he

exchanged with Council member Ann McHale during the course of a public meeting. Had it been an email, there's no question it would be produced. But Dietrich was unwilling to share its contents, both during the meeting and in response to a Right to Know Request filed the very next day.

Had this been a truly private exchange, I'd have no interest. But I have good reason to believe that Dietrich, an elected Council member, was accusing another member of that body with bribery during a public meeting. There's not much point to having an open records law or a Sunshine Act if a communication like that can be  hidden from public eyes.

In response to this Order, which comes from an independent state agency, I've been attacked non-stop with some really vicious comments by a mob purporting to speak for "the People." That job's already been taken by a state legislature, which was elected by "We, the people." They adopted the Right-to-Know law. They established the Office of Open Records, which enforces that law. I'll listen to what the OOR says, and let the mob bray. 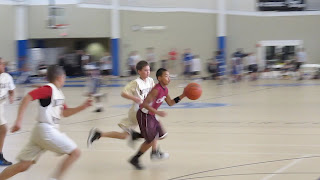 While a mob debased themselves all weekend with childish taunts and looking for rope, I was in Pottstown with a much more mature group - 6th graders. My grandson's Bethlehem 'Canes basketball team was playing teams from Southeast Pennsylvania and Jersey in the ninth annual Hoop Group Turkey Tip-Off. My grandson had been looking forward to this tournament, and was actually ticking off the days before it started. But ironically, their championship game on Sunday was against a next door neighbor, Allentown's East Side Youth Center. These boys all know each other, and have played together on different Summer leagues and other teams over the years. Bethlehem 'Canes walked away with the trophy and a coveted Under Armor T-shirt, but they were all good to each other.

They fought like hell on the court, but if one of them was knocked over, he would often be helped back to his feet by the person who moments before was swinging his elbows to make sure he had the ball.

They were playing at the prestigious Hill School, which looks more like an armed fortress than an educational institution. Surrounded by fences, the only thing it needs is a moat. When I finally found the right building, I was confronted by something more terrifying than a pikeman. Guarding the door was a student, and the password was $12, about twice the price of most high school games.

When I finally got in, I thought I was at an old English boarding school. The walls are decorated with team pictures from 1912 and 1913, but there was a modern gym, weight room and even a pool.

The kids had a blast. On Saturday, they were all treated to lunch by one of the coaches. While parents and kids wolfed down pizzas, I took advantage of the break to do some exploring along the Schuylkill River Trail, which extends from Pottstown to Reading. About two miles into my run, the macadam gives way to crushed stones in Berks County, blanketed by golden leaves.

It's a pretty little town. As a bonus, I was able to access free WiFi just about everywhere, except at the prestigious Hill School.

Now, you may ask, did a weekend at exclusive Hill School make my grandson and his friends any smarter?  Let me answer that by telling you what he and his friends did on Sunday night. They all went bowling and met Snooki at the Pigpen. She even posed for a pic with my grandson.