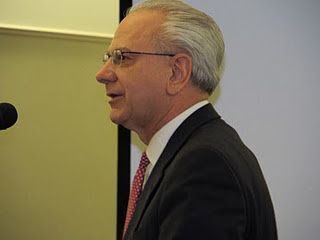 When he was running for County Comm'r in Lehigh, Vic Mazziotti was subjected to a scurrilous, last-minute, robocall, blaming him for Northampton County's out-of-control swaption. Due in October of next year, the most recent price tag on that financial misadventure is $24.5 million.

The truth is that the swaption was adopted in 2004, long before Mazziotti was even a County employee. It was then Executive Glenn Reibman's folly, and was supported by both Republicans and Democrats on Council. A bi-partisan failure.

In response to an unrelated RTK request, I discovered that in January, 2011, when the swaption was only $12.7 million, Fiscal Affairs Director Vic Mazziotti was imploring Council to pull the trigger.

If you recall, which you won't, the biggest obstacle to retiring the swaption was John Stoffa and Ron Angle. Stoffa has been riding the guilt trip of the swaption for years. If they had retired it, they would not have it to blame for everything from selling Gracedale to not fixing the prison.

And they didn't listen.

But if it went lower after they paid it, you would have yelled too.
That was, is, and will be Bernies response.

This is complete fabrication. Angle, like Mazziotti, called on Council to pay the swaption around a year ago. He may actually have been ahead of Mazziotti on this, and it appears in Council minutes. Stoffa was willing to do whatever 5 members of Council wanted to do, and therein lies the problem. That's the truth, not your recreation.

It's bad enough that Democrats blatantly lied about Mazziotti's role in the swaption. Now you're trying to pin Reibman's folly on Angle and Stoffa.

And as Anon 12:28 AM points out, Council should not be faulted for refusing to pull the trigger bc they had no way of knowing what would happen in the market. The fault for this lies completely with former Exec Glenn Reibman, and the Republicans and Democrats on a 2004 County Council who supported it.

Stoffa and the County Council, leadership from behind, and proud of it. Their motto, "If we don't do anything, maybe we can blame everything on someone else".

Ah, true leaders one and all. If only the founding fathers had not written that damn constitution, we wouldn't be in this mess. Poor, poor John Stoffa.

Don't fault Stoffa, either. He is in an unenviable position of having to gamble with taxpayers' money, and was put in that position by Reibman.

"The fault for this lies completely with former Exec Glenn Reibman, and the Republicans and Democrats on a 2004"

at some point, leadership requires you to nut-up, take action and resolve a situation. no one is allowing obama to continue to blame this mess on bush. yet you continue to allow this administration to blame reibman for everything.

No, I am saying that the swaption, perhaps the biggest financial disaster to ever hit Northampton County, is the direct fault of former Exec Glenn Reibman and the 2004 Council who foisted it on us. And no matter what Stoffa or the current Council does about it, they will be criticized. The truth is that Reibman is forcing them to gamble with taxpayer money.

You can say that Stoffa now owns most county problems, but not this one.

The swaption was not fixed because NORCO residents voted in a tea bagging majority 2 years ago and this is the only reason NOTHING has been done. Do nothing zero govt. tea baggers.

So the voters got what they asked for... Look in the mirror this is no more Stoffa or reibmans problem than anyone else except the NORCO voters. Period

Leaders are elected to lead. Damn Reibman if you like but at least he "did" something he thought was right. He turned out to be wrong. So now Stoffa and Council will do nothing so no one can "blame" them for possibly making a bad decision.

This is the worse form of leadership I have ever seen. Stoffa has even less spine that Dowd, and who thought that was possible.