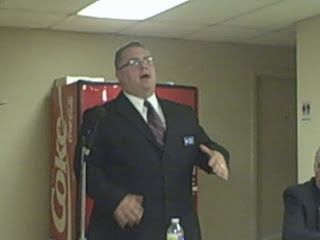 Incumbent Steve Barron and challenger Steve Salvesen filed their pre-election campaign finance reports on Friday. Barron is way ahead, but has an unusually small pile of money for a county-wide race.

Barron raised $6,838.57 over this reporting period, giving him a total of $17,573.57. His contributors include former Exec Glenn Reibman ($585), former Council member Charles Dertinger ($300), and of course, lots and lots of unions. This includes $250 from the Asbestos Workers, which must have been pleased when Barron asked for an asbestos investigation at the County, which might cost us $1.1 million. And all unions must have been thrilled when Barron threatened some sort of official retaliation when non-union T-Mobile refused to see him without an appointment.

Salvesen raised just $1,525 over this reporting period, giving him only $2,135. His biggest contributor so far is Broughal & DeVito ($500), who serve as Solicitors to Hanover Township. Salvesen has been a Supervisor there for 28 years.

No mailer no win. I guess King Shumar the Republican chair wrote off another winnable seat.

Barron now has a nest egg for his run for County Executive. Is Shuman brain dead. We should have Angle as the Republican chair.

Broughal & DeVito must be 2 of the most taxpayer richest lawyers in the Lehigh Valley.

I see their name as contributors in every local Lehigh Valley race.

Who says paybacks aren't part of the electoral process?

Let me get this straight. You would rather expose citizens to asbestos than spend to clean it up? You take tax cutting to a whole new level. OR just incredibly anti-labor.

I know it's the camera angle but in your photo Barron looks as big as the Coke machine. He looks like one of those blow-up Halloween lawn decorations.

I have heard, that even though the position will be full time in 2012, that Barron says "he can continue to teach" how is he going to do this with a change that says "No other job or work"

If Salveson was serious about this race, he'd be rasing money or spending more of his own..Apparently he is not serious.

He can still teach PT. "Gaffemaking 101" at the community college.

Part of the Controllers job is to find out wrong doing and bring it to the Publics knowledge. This is what Barron did when he found out the County was breaking all kinds of Laws concerning exposing the employees and also the Public to Asbestos. So guess acorrding to you BO & Stoffa its ok to break the Law and not do what is right so long as the money that would of been used for ASBESTOS REMOVAL goes for all his other projects. Like the New prison center and others. Nothing like treating the prisioners better but to hell with the employees and the public being exposed BREATHING IN ASBESTOS POISIONING.

What exactly does Barron teach? He is not a credentialed teacher and I am not aware of anything he knows that would qualify him to teach at a college level.

Barron did what was right for the county and it's employee's he is a stand up guy who's not going to buy into the Stoffa and Angle plan.

Being opposed to Stoffa and Angle is what makes him a stand up guy?

Anon 9:33, I see what you mean but am tired of using the kilt pictures.. I haece several piwcs of him atCouncil meetings, but he is outing in them. I ran with this one.

asbestos it only one problem with the county... not only in the courthouse, but the county home and probablly the prison..

In any building over 30 years old including many of our homes.

There is greater risk from second-hand smoke.

I saw his mailer. The guy looks like a shaved Ewok from Star Wars. what a joke. Anyone who can't control their dinner fork cannot control the county's finances.

This guy may look like a Macy's balloon but the incompetent chubby lisp[er is an embarrassment to county government.

I do agree he will probably be re-elected because once again the county Party dropped the ball. wonder who in the R Party leadership got paid off this time.

Teletubby Pufinstuff is a joke. His own staff can't satnd him. They realize he has made their Department a joke.

I would say that standind up to Stoffa and Angle on tough issues like asbestos and Gracedale and bringing these issues out to public makes him a stand up guy. They were not telling the whole truth about what was going on in the county and he let the public know. Tax increase for Gracedale not totaly true they never mentioned the swaption or the dui lounge. Keep up the good work Steve.

7:11 you are dellusional. Or maybe you are the Barron himself. Nice try.

Looks like the stay puff marshmallow man in a suit.

Was Barron endorsed by the ET?

No endorsements in Controller race.

Wonder why they didn't do any endorsement in the Controller race.