A Walk in the Park? Not at Housenick Park, Sez Comm'r Hudak 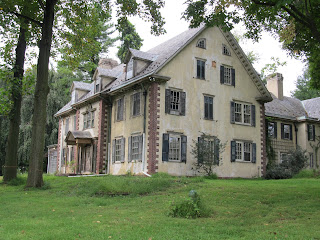 A three-story colonial style mansion at Housenick Park is in danger of demolition, if a Resolution proposed by Commissioner Michael Hudak is adopted tonight. Although Commissioners just adopted a Master Plan in October that calls for the building's restoration, Hudak is now proposing demolition, "if found to be necessary." In addition, he wants to delay any plans to list the building with the National Register.

Once home to Archibald Johnston, Bethlehem's first Mayor and a Bethlehem Steel Company president, this unusual mansion is the cornerpiece of a 55-acre passive recreation park located along Monocacy Creek, off Christian Spring Road. This property, along with $2 million for its care, was devised to the Township by the late Janet Housnick, Johnston's granddaughter.

Before the Master Plan was presented to Commissioners, Hudak made clear that Housenick's largess meant little to him. "She knew what was going on," he complained during a meeting of the Housnick Committee. "She let it fall into decay. Why didn't she have somebody fix the ceiling? It was never kept up over the years."

Although initially voting to accept this Master Plan, Hudak successfully persuaded Commissioner Arthur Murphy and Paul Weiss to join him in dissolving the Housenick Committee. "We've developed many parks in the Township, without the help of an outside Committee," he reasoned.

Then, in early November, Hudak interrupted an organized weekend walk at Housenick Park. He claimed  fundraising was going on, which would require a municipal permit 60 days in advance. Insurance, too. Walk organizers deny there was any fund-raising, but canceled to avoid needless controversy. A Bethlehem attorney has stated such a requirement for a simple, pre-arranged walk in the park, runs afoul of the First Amendment's freedom of assembly.

Now Hudak is, bit-by-bit, dismantling the very plan he voted to approve, knowing that the Committee responsible for it has been disbanded.

Township Commissioners will consider Hudak's resolution tonight, 7 PM, at the Township Municipal Building,  located at 4225 Easton Avenue.
Posted by Bernie O'Hare at 11/21/2011 12:01:00 AM

It appears that Hudak has begun to lose his brain cells from all the partying as a youth... or perhaps he has fallen off one too many roofs!

"Once home to Archibald Johnston, Bethlehem's first Mayor and a Bethlehem Steel Company president, this unusual mansion is the cornerpiece of a 55-acre passive recreation park located along Monocacy Creek, off Christian Spring Road. This property, along with $2 million for its care, was devised to the Township by the late Janet Housnick, Johnston's granddaughter."

I think as folks get really old, they don't have ability and/or the desire to properly care for their homes! Also, it's obvious to me from the above language that the lady cared very much about her family heritage and the community at large by donating the land and home. Lastly, it would be a shame if the donated money was used for anything else but to restore the Johnston house and seek historical recognition for the first Mayor of Bethlehem. Easily could be a tourist attraction as a small museum? Demolition? No way possible is my opinion. Just sayin'

This is the DUMBEST thing that Hudak has done. Why not let the Vo-tec kids repair the entire estate, there is carpentry, plumbing, painting, tile work, etc not to mention all the stone work and hand made bridges etc all over the property, why not teach a trade, and restore something that really would kill two birds with one stone, and while you are at it, run somebody against thsi Hudak clown and get him out of government once and for all

Can't anybody find Atiyeh to save the place by filling it with drunks or druggies? Abe, call your office!

Abe needs to be sure the zoning is wrong, then he may be interested.

Abe wants to surround the house with leftover Nemo signs.

Coming from someone who knew the family and played on that land when she was a little girl, this is just wrong