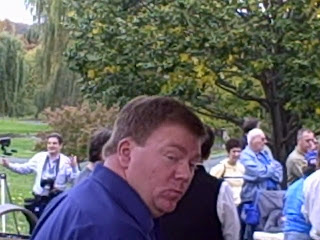 At yesterday's budget hearing, Council members were given a glimpse of changes being recommended by Premier Healthcare Resources, Gracedale's newly appointed private manager.  Ron Angle and Mike Dowd, despite losing races for their District Council seats, were there, and participated. But Council member Lamont McClure, who won, was MIA.

During the campaign, McClure portrayed himself as the Champion of Gracedale, but was nowhere to be found during a meeting in which its new manager was providing a preview of its recommendations, as well as their cost.

You prove my point.

He was re-elected by a population that knows that he nevers attends anything. He's following the madate of his constituents. Wasn't Dancing with the Stars on last night? Priorities.

Unless it was something serious like a death in the family, he should have been there..However, not knowing if this was the case Bernie, aren't you being a bit premature??

Given his track record, not at all.

Bernie,
The voters were made aware of this and generally ignored it. If his opponents in the past two races had worked as hard as Vaughn or others who tried to win, he'd be toast..The Republican party did a crappy job of recruiting candidates in this district..Actually , it appears they couldve cared less...They got what they deserve....The Dems certainly appreciate it..Thank You Republican party!!

anon 1:57 has a point. Had Herr Shuman done a better recruting job I agree that McClure would be toast.

The biggest crime is the Controllers race. If the Republican Party had recruited a viable energetic candidate and raised just a few dollars, teletubby Barron would be toast.

Now he has won and rumor has it his head doesn't fit through the door. He will now be in a position to challange a Republican candidate for county Executive. The buffon is already having his gold edged staionary printed.

Thank you again oh great Party Chairman Shuman. Maybe you can convince your buddy Stoffa to run as a real Republican instead of a pretend one.

OMG..Ron Angle would make a great party chair..After this election, the Call and the Express held a vigil because they thought theyd never see or hear from him again..But as party chair he'd get more press than he does now..Talk about fun!!! Actually i could see him as the Tea party Emperor..That would be a better fit.

Isn't it couldn't care less? If one "couldve" cared less, they presumably would have.