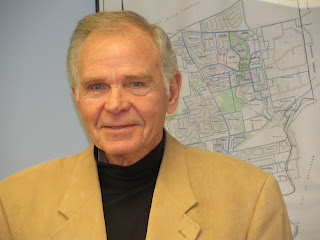 Northampton County Executive John Stoffa, gave a strongly worded endorsement to Controller candidate Steve Salvesen yesterday. ”I have known Mr Salvesen for over 30 years," said Stoffa, who resided for many years in Hanover Township, where Salvesen has serves as a Supervisor. "His track record of public service is proven. His election will return integrity and honesty to the controller’s office which has badly eroded under Mr. Barron."

In thanking Stoffa, Salvesen pointed to the only thing that Steve Barron has managed to accomplish since his election as Controller. "My opponent has earned two Turkey awards from a local Lehigh Valley Newspaper, one for his veiled threat against T-Mobile, and another for calling the EPA to investigate the County's handling of the asbestos clean up at its complex. Both Turkey awards are warranted and have caused damage to the Counties reputation and finances. We can not afford four more years of this type of childish behavior. Based on my opponent’s dismal record, one that he can not support to the voters of Northampton County, he has chosen a path of personal attacks and character assassination. On November 8th, we can change the way business is conducted from the Controller's office.”

Salvesen has served Hanover Township for 28 years as a township supervisor as well as its chair. His College education is in finance and accounting and he has worked in both public and private accounting and business management. Salvesen is also experienced as a small business owner and controller for several small businesses.

Salvesen, a Republican, is especially proud of an endorsement from Northampton County's highest-ranking Democratic official. “It is good for the people of Northampton County to have bipartisan cooperation in county government.” said Salvesen.

Hey Bernie, did you see the latest mailer from Barron. I got a peek at one. He claims he saved the county millions of dollars.

He also states Mr. Salvesen was "fired" from his last two government jobs.

Is that true? Are either of those statements true? Can Barron prove them?

It really had a major slime factor. Where exactly are the "millions" he saved?

Salvesen was not fired from his job in Slatington. Not sure about U Naz. That might be true. They wanted to do without one for a bit.

This is on Slatington's website and was linked by Geeting:

I'm no Barron fan, but it's pretty clear the Slatington board took action to terminate him. It was also confirmed in the Morning Call by the Slatington Solicitor that Salvesen was fired, but they could not go into details. Even Salvesen said he did not know why he was fired. Acknowledging he did not voluntarily leave.

Something does not add up.

barron's an embarrassment. Anyone's better than him. I'd vote for Bugs Bunny over him but this guy looks weighty. I'm not aware that Barron ever did anything in the job description of a controller. He seems to be a publicity hound and spokesperson for the unions. I wasn't aware that was what a Controller was paid for, by the taxpayers.

I looked at those minutes and suggest you do so again. Slatington did not terminate Salvesen, and those minutes substantiate they took no action.

Actually Bernie on page 5 of the minutes you will see this:

Actually, you need to read it again. If you scroll down, you'll see they actually decided to take no action concerning the Borough Manager. Yes, his position was terminated, but that is because he has already resigned. hat resignation was reported in The Press several days before this meeting ever occurred.

Yet in the Morning Call just over the weekend the solicitor acknowledged Salvesen was fired and Salvesen said he was not sure why he was fired. Why did he not say he resigned? Something does not add up.

Why would you vote for anyone Stoffa indorses.This will only cause more of his cronies to do as they please and not listen to the voters word.Steve Baron with the asbestoes issue he brought up is only trying to have the County follow Asbestoes laws ,rules an regulations. Because of them not doing removal in the past as needed and covering up the times that employees and even the Public have been expossed in all County Buildings.STOFFA AND HIS ADMIN. HAS PUT US ALL TO BE EXPOSED TO ASBESTOES POISIONING. The County has put themself in line for a couple Hundred Thousand dollar fine. And even after being investigted by The EPA.THEY STILL ARE NOT FOLLOWING BY THE ASBESTOES LAWS PROTECTING THEIR EMPLOYEES AND THE GENERAL PUBLIC.SO IF YOU WANT MORE OFF THE SAME THEN VOTE FOR WHO STOFFA SAYS TO.

Why would you vote for anyone Stoffa indorses.This will only cause more of his cronies to do as they please and not listen to the voters word.Steve Baron with the asbestoes issue he brought up is only trying to have the County follow Asbestoes laws ,rules an regulations. Because of them not doing removal in the past as needed and covering up the times that employees and even the Public have been expossed in all County Buildings.STOFFA AND HIS ADMIN. HAS PUT US ALL TO BE EXPOSED TO ASBESTOES POISIONING. The County has put themself in line for a couple Hundred Thousand dollar fine. And even after being investigted by The EPA.THEY STILL ARE NOT FOLLOWING BY THE ASBESTOES LAWS PROTECTING THEIR EMPLOYEES AND THE GENERAL PUBLIC.SO IF YOU WANT MORE OFF THE SAME THEN VOTE FOR WHO STOFFA SAYS TO.

Wow..I'm assuming that with this endorsement John knows that the controller's office can't give him any headaches for the next two years because there is no way Salveson wins this race.

Stoffa doesn't care because if Barron decides to audit something and finds a problem with the way the Stoffa gang counts money, Stoffa's pal Joe Owens will give Barron another turkey.

when the Press is in the bag for you you can get away with murder. Stoffa has been getting away with screwing up this county for six years and counting.

Jumbotron is harmless. He doesn't really "control" anything. He's a goldbrickb who doesn't do his job. He's perfect for government.

I really am not not sure who deserves to be the Controller, but giving a Turkey for exposing a problem like asbestos is ridiculous.

I sat in an office while they were removing some of the asbestos. The administration denied that it was asbestos. They lied. Hopefully I never come down with cancer, but if I do I hope my wife and children sued that pants off the current administration.

Barron did not deserve a trukey on that one.

bernie, you need to get with the program, you only hear and read what you want.. read more about salvesen.. that's the last thing the county needs in the controllers office! Steve Barron has done nothing but his job in the past. So please everyone that can vote, vote for steve barron on november 8th!

Keep saying it Bernie, it will become true!!!

I did not deserve the Turkey for being anything other than a grandstanding douche' bag.

I'm furious, however, with The Express-Times because I want my Turkey. Seriously, I WANT MY TURKEY!

I'm currently setting up for a photo shoot in Marty Till's flower bed. Several thousand pounds of my best friends are with me. Till's vegetation is toast.

Did someone say, "toast?"

Barron Von Footinmouth is a political hack who is using the asbestos boogey-man to garner union votes. There have been workers in asbestos mines for 30 years who have not developed mesothelioma or asbestosis and some Norco workers pass through an area that has inert asbestos materials and the hysteria begins. Thanks to the Barron and his personal injury lawsuit cronies.

Gee, and what type of law does McClure practice? Oh yeah! Asbestos litigator...hmmmm. Isn't that quaint?

Barron is a young immature old teenager in an adult world. His judgement is horrendous; his standards of professonal behavor absent. He may win but the taxpayers lose.He never saved a dime for the conunty...indeed increased expensex by giving a do nothing solicitor full time status money. The day will come when the voters who vote for him next tuesday will realize their mistake.

So could someone tell me what Barron teaches at the Community College.

Seriously, I cannot imagine what this guy could teach. Maybe how to try, and fail to intimidate business owners. How not to perform a job and get re-elected.

Really, I would love one of the Barron lovers to answer what exactly this guy teaches. Maybe I am missing something here and will change my mind on him and my vote.

Someone said he teaches government. I don't know if that is accurate or not. Another source claims he teaches law. Too bad Bernie, he took your gig.

Being insulted by Stoffa ia like being savaged by a dead poodle.

What I want to know is when did Salvesen take the integrity that he's now going to return?

Stoffa should take a refresher course in English if he's gonna be so hi falutin' disingenuous about Controller Barron.

You are not supposed to be commenting here. Give me a reason.

Why am I not supposed to be commenting here?

A reason for what?