NorCo Sheriff's Department Gets Accredited Where Credit is Due 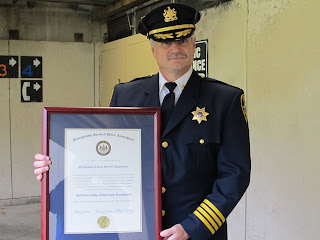 This recognition follows two years of hard work, meeting 134 standards. The process was started under former Sheriff Jeff Hawbecker, and was finished by Sheriff Randy Miller, who as Police Commissioner in Bethlehem guided his department through the accreditation process there.

Miller declined to take any credit, choosing instead to point to the hard work put in by his deputies. He also credited Excutive John Stoffa, former Director of Administration John Conklin and County Council, who had to budget the money. "I'm kind of like the orchestra leader, waving the baton," Miller stated.

Good for Norco. But why is it that so few departments are certified?

Answer... because its not required and costs lots of money to achieve and maintain.

Proof of value is not in some framed certificate on a foyer wall, earned by jumping through some hoops. The proof is in the day to day execution of the job.

If they do the job, this is nice,but is it necessary? If they don't, no ceremonial "You passed the test" is going to matter.

How much did it cost, and what does it deliver for the taxpayer? If insurance breaks and other savings, then maybe a worthwhile exercise. If just so troughfeeders can puff up their chests and feel good about themselves, there are better ways to spend time and money.

What a bunch of whiners. Give credit where credit is due... and by the way next time you need surgery
make sure u find some surgeon who is not licenced or board certfied

Congratulations to Sheriff Miller and his staff! The accreditation process increases professionalism of the police force and also has shown to reduce law enforcement liability insurance costs. A good thing for Norco.

Can see the point of some posters. Some of these groups make sure you get the certificate as long as you pay the fees.

Don't know if it really means anything at the end of the day except more ways to spend money.

By the way how much did the decal that Stoffa put on the cars cost?

obviously the doctor slapped your heads instead of your asses. You should be proud that the county police have obtained this certification. Try to lighten up

Costs are minimal compare to liability and litigation costs from not adhering to common practices and policies.

Must have cost a lot to get those decals. Very defensive folks.

I am no fan of the Northampton County Sheriff's Department, whose deputies used to come to meetings and act like little babies. I've picked on them for years.

But I've noticed a BIG change in their attitude over the past 18 months, and believe we now have a fine and very professional force. Part of it is its leadership, but I think this certification has gone a long way to making these law enforcement officers realize they should act like law enforcement officers, and they have. Since I think we are slowly heading in the direction of a county-wide police department, I am very pleased at this certification, which is worth every penny.

Gee, purple shirted thugs who disrupt county proceedings get a merit badge for knowing how to do their jobs.

Let's have a pride day, complete with a bake sale and parade!

Just look what gubmint is capable of.

Yes they can! The shiny paper says so!

It's so sad to see that some of your readers are so miserable, that not one single positive County story can sway them otherwise.

Had the Sheriff's department never bothered to get certified and some tragedy followed, many people would complain that the Sheriff's Department should have been certified.

Government is kinda' like the weather that way. We all love to complain about it.

Screw you and Ron Angle.

You know what really makes the Ron haters so nutz?

He will still have lots of money and still have time to be involved and hold government accountable without the shackles of protocol (not that Ron gave a shit about that anyway) and will be there, bigger than life, when "I told you so" time arrives.

While I'm sure he didn't want to lose, it really will be water off a duck's back.

And that just frosts their asses more than Tim Tebow beating the Jets and thanking God for the blessing.

It would have been better for them had Ron won. I don't know if he plans on coming back as a member of the audience (he claims not), but I don't think he'll be able to stay away. I do know that he is happier now and noticed last night that he's even begun to whistle again.

"obviously the doctor slapped your heads instead of your asses."

Clem is Ron jr. and everyone now knows it. the jig is up.

I love when some anonymous asshole thinks he knows who other anonymous posters are. Next, I'll be Clem, in addition to numerous other names. Maybe Zorn is Ron, Jr. The people who make these goofy accusations are usually the very people who themselves do what they are complaining about.

The emperor has no clothes.
Everyones identity will be revealed when the case goes to court.

I look forward to it.