The Wicked Witch of West Easton is Melting 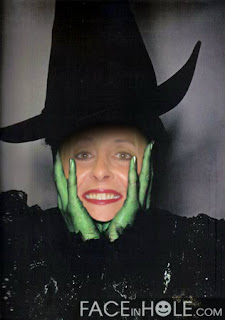 On Halloween, I threw a bucket of cold water on Tricia Mezzacappa, the Wicked Witch of West Easton, and her crazy borough council campaign of lies. The Wicked Witch was telling everyone that Kelly Gross, who's also running, was illegally collecting social security disability. In addition, she claimed Abe Atiyeh bribed Mayor Gross with a brand new Caddy, in exchange for supporting a 100-bed DUI center. Councilman Tom Nodoline was supposedly bought off for a new pick-up truck.

"I would have held out for a Cadillac, too" Nodoline tells me. He thinks the Wicked Witch is "pure evil,." Kelly Gross has also supplied me with a letter from the Social Security Administration, acknowledging that she has never even applied, let alone collected, disability.

Since my Halloween post, the Wicked Witch wasted most of two days on the Gracedale blog, calling me a stalker and pig kicker. She claims she even called the police ("Northampton County non-emergency 330-2200") because of my disgusting behavior last time I was at her house. I talked to her for an hour, which can be pretty offensive. But here's how she explains it to the Gracedale Goons.


"[I]t is so sinister, that no one under 18 should read it. Therefore, I will tell the very end of this saga to you in person, if you are interested. I can tell you for sure, he most certainly did kick my pig, and later, the police were called. The incident surrounding the police call is so embarassing that I never followed up on it. His actions were so gruesome, that I probably would not be able to even testify about it. Thats how unbelieveable it is. I saw a side to O'Hare that night that would shock alot of people..even those who detest him. SO where's the police report? I didnt file a police report. Why? There was no violence, and I was physically unharmed. What was the problem then? Stay tuned."

Apparently, a flip-cam was involved.

After even the Goons had finally had enough, the Wicked Witch decided to start her own blog, "to provide a forum for accountability and transparency in West Easton government." But instead of doing that, she has spent another two days writing post after post to spew more tall tales about me. I was unaware that I had asked her for massages or medical treatment, that I carry around wads of $100 bills, or that I once emerged from the woods "like a lumbering prehistoric beast, knuckles dragging the dirt, and foaming at the mouth."

Needless to say, I won't be linking to her blog, although she and her familiars will post links in various comment threads.

She's probably right about one thing. After walking 5-6 miles in 90-degree heat, with a few running intervals thrown in, I probably did stink. She's got me there. In my defense, I do take a shower every month. Even if I don't need it!

Here's my questions. Why would a person who claims I stalk her would spend most of four days writing about me? Is she running against Kelly Gross or me?

Her borough council campaign is melting. She's forgotten all about Kelly, and is honing in on someone from Nazareth. And I don't give a shit, but I love it because the more time she spends spewing venom at me, the less time she has for more lies about Kelly Gross.

Most of West Easton knows her better than I. Despite sending a letter to every registered voter in West Easton last week, begging them to come to Thursday's County Council meeting, nobody showed. Not even her running mate.

Now, here's what she's really saying. "Ahhhhhhhhhhh!!! You cursed brat! Look what you've done!! I'm melting, melting. Ohhhhh, what a world, what a world. Who would have thought that some little bottom-feeding blogger like you could destroy my beautiful wickedness."
Posted by Bernie O'Hare at 11/06/2011 12:01:00 AM