Voter Machine Malfunction Appears to Be Nonissue in McClure Race 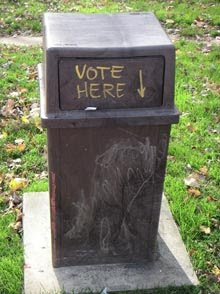 On Friday, I told you that a voting machine issue has cast a dark shadow on Lamont McClure's slim, 114-vote, margin of victory. Although the voter has authorized me to identify him, I will decline doing so because he is a private citizen and because I have since determined this to be a nonissue.

A citizen voted at SeWyCo in Lower Saucon around noon on Election Day. No matter how often he pushed the Connolly button, the name refused to light up. He spent time pressing it over and over before moving on to cast his vote. Because the second press cancels the vote, he is unsure whether his vote for Connolly was actually ever cast.

Bothered, he returned to the polling station about an hour later. At first, election officials were skeptical, but then one of them tried it and agreed it was a problem, so the machine was taken out of operation until a new light could be located and installed.

Why is this a nonissue? Because Connolly won in that precinct, and the margin of victory appears to be the same as another polling station at SeWyCo.

Here's how the 2 precincts at SeWyCo tallied.

If one of the machines was defective for any length of time, I would expect to see a wider disparity in the undervote, as well as more narrow margin of victory in one of these precincts. So it appears, at least to me, that this problem did not interfere in any meaningful way with the result.

Well aren't we all lucky. Judge O'Hare has cleared all of wrongdoing. We can all get some sleep.

Thank GOD bo has deemed this a non issue.

just another excuse to cry because his boy didn't win and another silly attempt to throw mud at an enemy.

you dig your hole deeper on a daily basis.

Keep digging BO....soon you will be in that cow pasture with Ron digging cow manure for real!

Judge "Roy Bean" Bernie declares that his attempt to create controversy has failed. He now moves on to besmerch Karl. Watch out who's next....hmmmm.. let's see...
oh yes... Santa Claus is coming soon. If he stops at anyones house that supported Parsons I guess he will be accused too.

Santa Claus was seen reading the letters from the grandchildren of the Gracedale goons. Santa is a scumbag and should be shunned.

John Stoffa may have to disallow Christmas this year. Or maybe he, angle and O'Hara can firm a law firm on the public dime and sue Santa Claus on behalf of "good government" everywhere.

I agree. I think the Angle loss has O'Hare on the sauce again. he is really over the top on this one.