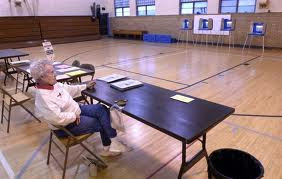 Why did Ron Angle and Mike Dowd lose? According to columnist Tony Rhodin, it's all about Gracedale. Those sentiments are echoed by The Morning Call's Bill White, as well. I believe they're both wrong.

While I'll certainly agree that Gracedale played a role, it had to be a small one. I say this because Lamont McClure, Gracedale's biggest champion on Council, was nearly defeated himself. The final (and still unofficial) tally gives him a lead of just 113 votes over a candidate who had no money to send a single mailer, and spent no time knocking on any doors. If it really was all about Gracedale, McClure should have cleaned up.

Tuesday night, I speculated that it might have been an anti-incumbent bias, especially with a dysfunctional County Council that has historically been unwilling to work with County Executive John Stoffa. But that makes no sense either because Angle and Dowd are two of Stoffa's biggest allies. That theory might even be more ridiculous than blaming Gracedale.

Yesterday, I had a conversation with a veteran of Northampton County politics who gave me the most plausible reason I've heard so far. What he tells me is that, in most Northampton County municipal elections, Republicans stay home. I guess they're saving themselves for bigger and better things, even though these local races have a bigger impact on their daily lives than anything else. Whatever the reason, a proportionately larger percentage of Republicans avoid municipal elections, at least in Northampton County. And this gives Democrats and the issues they care about an advantage.

Does this theory hold up with the numbers? I can tell you that total turnout on Tuesday was just 18.34%, but have no idea what percentage of registered Democrats and Republicans are in that total, even after a visit to the Elections Office. That information will be available in a few days, and I'll share it with you then.

But from what information exists right now, this theory seems more and more plausible. There were 35,998 voters on Election Day. John Morganelli, a Democrat, received 23,390 votes. It's likely he received some Republican votes, and there are probably some Democrats who hate him. But most of his votes, I would think, come from Democrats. If that is true, that would indicate that only 12,608 Republicans showed up on Election Day, accounting for only 35% of the votes cast.

Now this is just a theory, and the hard numbers will come out in a few days, and I'll tell you then what I've learned.

I can tell you I am a registered Rep. and I did not vote for Angle or Dowd. Who knows how many others did the same? Try another approach this one is quite weak.

You have not explained why this is weak. Also, you could not vote for Angle and Dowd.

This runs against the standard line that Republicans vote more consistantly than Dems. I can't speak for Angle or Dowd's areas but when I look at Bethlehem Township (NorCo's third largest municipality) which tilts fairly Republican, except Ward 2, it went Republican this municipal year in all three contested races, as it usually does any other recent year. Percinct turnout rates on the County site ranged from a low of 13.7% in (2-1, Dem Ward with no contested race besides at-large) to 61.08%(Ward 1-2, 136th). Ward 1 (probably thanks to Atiyeh's multiple fliers and excessive green signs) with turnout rates of 30.95%, 29.95%, 11.57%, and 61.08%. Ward 1, also, traditionally GOP.

But back to the big picture, just two years ago many posters on LVR were praising/bemoaning that it was the Democrats who stayed home for the 2009 municipal election to allow the GOP domination of Co. Council despite the sizeable numeric advantage of NorCo Democratic registration.

If your theory holds weight for Angle and Dowd's districts, it might be more reflective of those specific races, than Republicans generally.

Final thought....I think we have to take voter turnout percentages with a grain of salt. I know from looking at street lists that many addresses have former residents still listed as registered voters. Purging doesn't seem to happen very efficiently, so unless someone re-registers elsewhere, they stay on NorCo rolls. This will slightly deflate voter turnout stats (probably in every County).

Also, McClure is a traditionally weak candidate in his own district. Didn't he barely beat Shwartz (spelling?) in a previous election despite vastly outspending him something like $14,000 to $500?

Re last comment, I don't know what the party break down is of the District as a whole..

Bushkill R here who never doesn't vote. Rs always do. I voted for Angle but don't like him. I suggest many Rs' shit meters were finally full of Ron. Other than that, Ds enjoy a recently ballooned voter registration edge in the post hope and change years. I'm impressed that Rs ever achieved a council majority in NorCo.

Bernie cannot accept that this was a voter(republicn, democrat and independent) repudiation of the last two years of Stoffa and rubberstamp allies like Angle and Dowd.

In 2009, the Republiucans swept with big numbers. That was a municipal off year election.

You are really stretching for an excuse to the obvious. The voters watched the behavior of county governemnt, embodied by Stoffa and
Angle and said no thank you.

Persoanlly, I beleive that the politcics of blaming all the county problemns on past adminstrations(after 6 years) and suing stupid citizen groups never works and makes the pols look like arrogant jerks.

The idea that the Press shilled for Angle and Stoffa in the Gracedale debate.

So many theories can be thrown around but this one is just weak. Two years after Republicans swept in the voters said no thank you.

Time to either face the facts or come up with another excuse for Angle fatigue.

BO is so far off base it isn't funny. next he'll tell us callahan had nothing to do withe the dem sweep in bethlum. must be having withdrawal

Awaiting your analysis. I think cross filing and uninformed voters in an off-off year election are culprits in the Morganelli race.

Didn't Angle lose by a larger margin than anyone else? Doesn't that fact point to a repudiation of a person who was involved in the submission of a questionable will? Or a person who has bullied anyone who disagreed with him? His ouster as Council President was a portent of this week's result

I think Anon 12:17 either lives in NJ or is just really clueless about Northampton County.

I'm sure you have heard about the poll in Angle's district that said that 58% of the Republicans had unfavorable view of him..That was done awhile ago..While the Gracedale vote wasn't his only undoing I doubt that it was the fact that less Republicans came out. If he was so unpopular, even in his own party, it's doubtful that they gave him tons of votes either..All in all it was Gracedale, the will issue , and the prison issue..They all hit at the worst possible time for him.. That's pretty much it..

Bernie
Isn't it amazing. We have an admitted marijuana smoker and cocaine user in the White House but we vote someone out of office because he is disputing a will and he is nasty. Amazing

Truth be told, Stoffa is washed up. People want civility back in place especially when issues affect the people of the county, the general public. It will be interesting to see how this all plays out because Stoffa lost his hench man, hope he can attempt to make clear decisions now. Dowd never really made a difference either way. I forgot, how will Barbara know how to vote now that her "follow the leader" colleague is gone. Maybe she will resign!!!

Miller: He not only disputed a will that got forbid would have allowed a disabled adult nephew to receive a 1/4 share of a depleted inheritance. He DEFRAUDED a friend of 35 years. His conduct was described by the Judge as being MALICIOUS and WANTON. He even sued his own father's Estate. He used his public office to try and even private grudge. He has forever stained the name of Stoffa by his vicious attacks on people who dared to disagree. Yes Miller. That's all he did. You would know if you didn't have a case of O'Hare moral myopia.