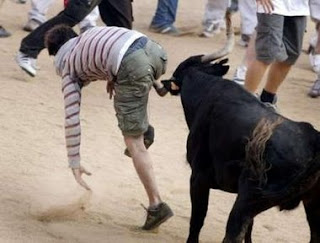 In the wake of Jenn Mann's decision against seeking re-election to her State House next year, the rumor mill about her potential successor is in overdrive. One certain candidate is Julio Guridy, who claims he can speak three languages. Unfortunately, English is not among them. The other certain candidate is Guridy's colleague on Allentown City Council, Mike "Hola" Schlossberg.

I understand that, in an attempt to be more Hispanic, Schlossberg is taking Tango lessons and plans to run with the bulls next year. "Hey, I already run with Pawlowski," he tells me.
Posted by Bernie O'Hare at 11/30/2011 12:42:00 AM

Who will be the Republican Candidate.

It's true about Mr. Guirdy not being understood when he speaks English.
But if Allentown's majority population is now Spanish-speaking, does it matter? If he runs for this seat, suspect he'll win.

Who will be the Republican Candidate.

Bernie thank you for the laugh.. It is true that Guirdy doesn't speak English very well. I can never understand him.

Also with the redistricting a lot of center city will be removed from the current borders. Guirdy doesn't stand a chance.

Schlossberg is a wolf in disguise as he is surrounded and works in an environment of corporate republicans that only seek to protect themselves and their corporate donors!

Ramos was not a lifelong resident. He lived in West Chester as recently as 2006.

Toth was not a good candidate. Too young and it showed.

With the redistricting process creating a new downtown district, and not being totally done yet (I suspect her retirement will cause map makers to revisit this briefly), neither is a sure thing to even live in her seat come next year. Finding a candidate for either party may be harder than one might guess. Allentown's state house lines are being re-drawn rather radically, although I'd say for the better.

"Latinos don't vote". That is true but Latinos will vote for latinos. Go to Reading or to Philly and check it out.
Mann is bailing. The right "Latino" with a Latino get out the vote operation will crush a gringo.

Of course the liberal white overlords like Sweeyer and Schlossberg want to keep representing the "brown" people for their own good. Their time won't happen.

Schlossberg may get the inner city gay and hipster vote but that is about It.

The only people that love you guys more than your mothers are yourselves. gotta love the ego's.

"Latinos don't vote". That is true but Latinos will vote for latinos. Go to Reading or to Philly and check it out.
Mann is bailing. The right "Latino" with a Latino get out the vote operation will crush a gringo.

Of course the liberal white overlords like Sweeyer and Schlossberg want to keep representing the "brown" people for their own good. Their time won't happen.

Schlossberg may get the inner city gay and hipster vote but that is about It.

The only people that love you guys more than your mothers are yourselves. gotta love the ego's.

The character assassination on this site is really remarkable. I used to like to visit often, but now I'm not so sure. Lots of negativity. Not my cup of tea.

You might not like Julio or Mike, but both are well-meaning public servants and I for one appreciate their serving the public by being on council. If they want more abuse by going to Harrisburg, God love them.

The more interesting idea is that Jenn Mann's chief of staff, Pete Schweyer might consider a run. He would be a serious candidate, and he's intelligent and cares about the people of Allentown.

"Latinos don't vote" --- generally true.
"Latinos will vote for a Latino candidate"- sometimes true, but never a given.

I don't think anyone has really hit on what the key is to getting out the latino vote, but Julio is as connected to the community here as any other Latino has ever been---certainly as much as Marty V. in Allentown or Nancy Matos in Bethlehem.

One thing that is true is that Mike S. will outraise Julio by three to one and he will outwork him. If there is any advantage to be had through actual hard work and fundraising, it is his.

I think that, at the end of the day, the hard work and fundraising matters more, and Mike wins.

Pete Schweyer will run for the newly-created east side district. He's in that district, not Jenn's.

What a dumb thing to say about Julio's accent, by the way. It's a fair comment, so it shouldn't be deleted, but the guy speaks English, he functions, has a good job, holds office and owns businesses and property here.

WTF is wrong with people? Why should an accent preclude anyone from anything in this country.

If it were a lack of facility with the language, it would be a valid point, but it's just an accent.

Guridy is NOT a good man. What on earth gives you that notion? He is sucking the blood out of us at the Bridge Comm'n in a political job, never voices an independent thought, and is pretty much out for himself. And no, he does not speak English. I have listened to him enough t state unequivocally that he definitely does not speak English. It's not his accent that troubles me, but his utter inability to put together a sentence anyone can understand.

I challenge Allentown to double their efforts and produce 10% of registered voters. You can DOOOOO it!

Given the two, Schlossberg has more energy and is more accessible.

Scheweyer picks up the phone in that office. He was an active listener when I called recently. Thumbs up there.

Thank you Pete, thank you Mike. Your opinions have been noted!