Some Things Are Worth Dying For 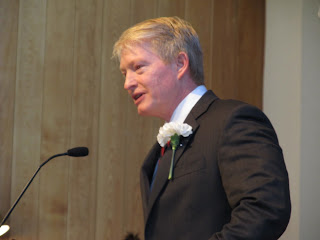 About 100 people stayed away from the usual Sunday football games on November 6 to salute our veterans in a ceremony at Ebeneezer Bible Fellowship Church, that included a color guard, bagpipes and of course, speeches.

Jack Leh, a corporal in the 82d Airborne during WWII, claimed his experience was worth a million dollars. "But you couldn't pay me a million to do it again," he said. Another WWII vet, who are dying at the rate of 1,000 per day, spoke of a group that he and other vets formed to educate students. But it was Judge Edward G. Smith, a Navy Captain who served in Iraq, who summed up everyone's message the best. "Some things are just worth dying for," he said.

In addition to these speeches, there were musical interludes by Bethlehem's MORA club and a rendition of WWII-era songs.

Some time ago a veteran suggested we say thank you on a regular basis to those who served. Thank you Bernie
for this reminder.

Bernie
Really surprised you're not writing about Penn State this morning. What a horrific news story.

Judge Smith is a class act!

As one who has not served, I am humbled and grateful.

you should be humbled and ashamed - you had the chance to volunteer and you did not. those who served should always be honored for what they have done. those who did not should be grateful for their freedom but should not take it for granted. most put themselves ahead of their country.

you have anger issues. why should anyone who hasn't served be ashamed?

I'm proud of my service, but generally do not hold anything against those who didn't.