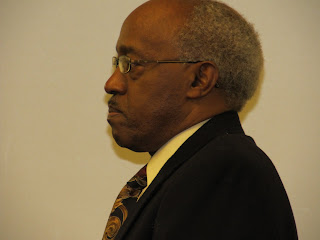 Bethlehem Township Democrat Donnell Bowie was appointed last night to Northampton County's Election Commission, making him the first African American in County history selected for this important role. A very distinguished man dressed in a suit and tie, Bowie actually came to the meeting, sensing the responsibility being placed on his shoulders. But there's still no diversity on this board.

As nice as it is to see a person of color finally get selected, the manner of selection of Election Commission members is fundamentally flawed, perhaps even unconstitutional.

According to the Home Rule Charter, the Election Commission is comprised of five members, three from the majority party (i.e. Democrat) and two from the minority (i.e. Republican). The party chairs actually send a list of names to the Executive. No provision is made for members of minor parties or independent voters, with their annoying concerns about voting machines and paper trails. So it is rigged to perpetuate the two-party system, at the expense of other voters.

Then there's the question whether the Voting Registrar works for the Elections Commission or the Executive. Nobody seems to know the answer, although it's been debated now for six years.

It's obvious that this is an issue that needs to be addressed by Lamont McClure's Law & Order Committee. But he hasn't held a meeting for three years.

"although it's been debated now for six years"

Speaking of the election comm...what the heck happened in UMBT that allowed a R primary loser to gain the ballot as a D. Jerry Geake should never been allowed to do what he did to gain the ballot as a Dem. What Rabbat did was underhanded and probably illegal and nobody says boo. Can I file a RTKL with the commision as to how this was done? Subverting the election process seems pretty easy in this county.

I had not thought of the "sore loser" rule. I do not know if Rabbat was behind this.

The election commission is an independent branch of government. It is not to be toyed with, or given marching orders by the county executive, his lakees etc. They do a fine job and have been running quietly for the past 5 years. The machines are great and have very few problems (led lights occasionally) Also the Election commission is SUPPOSED to pick independent council, lets see if they have the balls to do just that this time around, they are stuck with an administrative HACK and he should not be doing the job, he clearly does no understand.

There is absolutely no basis for any of the things you are saying in the Home Rule Charter.

There is absolutely no basis for any of the things you are saying under the historical record, either.

Walt Garvin politicized the Elections Comm'n. Joe Long's daughter actually worked there. For years, it as just another arm of the Democratic party. And the failure to include independents or minor party members is a fundamental flaw.

Where the hell is Lamont McClure?

Stoffa put together a commitee of political supporters to destroy the integrity of the election office and bypass the commission. When Stoffa is gone, it can again be independent.

Lamont is on vacation with Bob Freeman, Judge Crater, and O.J. Simpson's wife's killer. In his case, just showing up is not half the job.

The Elections Comm'n was a mess under Garvin, and the office itself was affected, with later and later returns on election night, along with a registrar who would call the Dem party boss for advice. It is a better run office now, but it is by no means independent, as it should be. It's set up to be a third arm of the Democratic party.

Stoffa supporters and money men dominated that committee. Most independent observers saw it for what it was, a Stoffa led "witch hunt" to dump the head of the office who happened to be the daughter of a political rival of Stoffa.

It is how Stoffa handles things. He puts together fake committees to recommend what he wants to do.

Tried and true old political strategy for an old pol.

Daughter of a Stoffa political rival? She's the daughter of a crazy man who has never held or run for office, and would be laughed out of town if he ever ran.

The Committee discovered, among other things, that we were using election machines that were not even certified by the state.

Dennis Benner, the former Voting Registrar, sat on that Committee and made many good suggestions. This is a money man? You are completely full of shit.

The election returns were not being given out until 3 and 4 in the morning under Debbie DePaul, and as a result of the changes proposed, they were finally able to finish by midnight.

And it was no witch hunt. If that were the desire, Stoffa would have fired her. The whole point was to make the elections process more professional, and the Committee succeeded.

Frankly, I think she should have been demoted.

Right O'Hare and in your world Angle won the election.

You know, I think Dee and her staff is doing a Great job, and I think that the returns come in much quicker since dee and howie are there. But I still think Stoffa and his office should let them do their own thing. They should have let them get rid of the assistant registrar and let the two split the duties, they have been doing for over a yea anyway.

Well, that's why the HRC needs to be changed from its current ambiguous form. Does she work for the Exec or the Comm'n? No point in arguing that up and down. Let's come up with an answer that serves the best interests of the County and change the Charter.

As for your other point, I was shocked to see the County was done while WFMZ was still counting. That's a first, and it is a credit to every person in that office. From Dee and Howie to Rich and Amy and the newest additions.