Following the Money in the Kraft, Vaughn Race 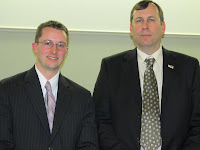 Pre-election campaign finance reports were due on Friday. Here's how the money looks in the County Council Bethlehem-area race between Ken Kraft and Seth Vaughn.

Second only to Angle in the money-raising department, Ken Kraft pulled in $18,400 this reporting period, giving him $29,699.78. Most of this money comes from private sector unions, with $10,000 coming from IUPAT alone. Kraft is a business agent at that union.

That's a lot more than the $194.33 in Vaughn's till. During a County Council debate last week, Vaughn twice stated that he refuses to accept any money from "special interests." Since just about everyone is a special interest, that leaves just himself as a donor.

Tells you all you need to know.