Following the Money in the Dowd, Werner Race 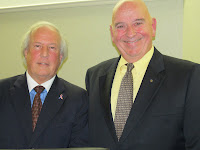 Pre-election campaign finance reports were due on Friday. Here's how the money looks in the County Council Easton area race between Mike Dowd and Bob Werner.