Following the Money in the Angle, Parsons Race 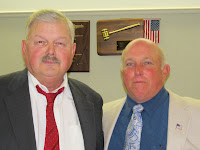 Pre-election campaign finance reports were due on Friday. Here's how the money looks in the County Council Northern Tier race between Ron Angle and Scott Parsons.

Ron Angle raised $6,036.22 during this reporting period, giving him a campaign treasury of $49,086.44, the largest of all Council candidates. His biggest contributor this reporting period is Upper Mount Bethel Township resident John Howard, who gave the Bulldog $1,000.

Sources tell me that Parsons' mailer was dumped by the post office because it was improperly addressed. I do not know whether that is true.
Posted by Bernie O'Hare at 11/01/2011 01:12:00 AM

Gotta take a shot at Parsons, right. Do it now cause Angle's lies won't work this time. He is toast on election day.

I took no shot. I heard from several sources that postal officials dumped Parsons' mailer bc it was improperly addressed. I am unsure whether that is true, and said so. Nobody I know has received a Parsons' mailer.

I received my Flyer. Looks AWESOME!!!!

Anon 7:59 you could not possibly have gotten that mailer if you think it looks awesome.

Gee Bernie,
Ever think you should stop the hit pieces on Trish?

Did she really get under your skin that bad?

Are you ever going to just let it go?

I read her remark...you are stalking this poor woman.

You are making an ass of yourself.

I got one either last week or the end of the week before.
He doesn't have pictures of himself with farm animals or shaking babies and kissing hands.
I live in Bushkill.
I have it here if you want to know what is says.

He does have a picture of himself digging in the quarry he works at on top of a giant Brontosaurus. And his boss Mr. Slate is there too. Bam Bam is smacking Ron on the head with his club. This in an effort to appeal to and capture the vote of the Christain Evangelical Rightwing who think the world is only 5000 years old. And man walked (and worked with) the Dinosaurs. Sorry Ron he got there first on that one.

Don't forget, Ron Angle( I'm for the little people) took $3000 from GEO group who wanted to build a private prison in the Slate Belt at the same time Council was voting on the issue. (Morning Call 2/15/11). You can only fool people so long, lets hope the Slate Belt will oust this crook.