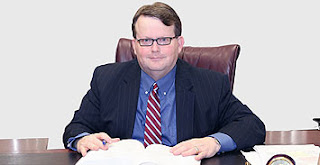 Michael A Snover is many things. He's a well-regarded local attorney with an active practice. He's an effective assistant NorCo solicitor with a knack for winning workers' compensation cases. Under most circumstances, he's one of the most pleasant fellows you'd ever want to meet. He's so nice he even let me shit in his house, though I had to use a bathroom. Not any bathroom, either, but some special bathroom for Democrats that nearly sucked me into the Delaware when I flushed. But nice though he may be,he's really pissed. And it's at NorCo Council VP Glenn Geissinger.

I told you on Monday how Geissinger basically betrayed Lee Snover in the vote for GOP state chair on Saturday  She's the NorCo party chair and is Michael's wife. The NorCo Executive Committee, by voice vote, endorsed Lawreence Tabas. The state committee members from NorCo, with the exception of Peg Ferraro, were supposed to support him. Peg was excused because she had declared early in the process that she was voting for Val DiGiorgio.

Geissinger defied the county party. And according to Lee, he broke his word to her that he would vote for Tabas, a word that was given in her husband's presence.

On Facebook, the normally mild-mannered Snover had this to say about (and to) Geissinger: "Glenn, you don't get it, and apparently will never get it. I would not vote for you as dog catcher at this point."

And this: "It's not all about money which you apparently think it is. Did you not notice that despite your money you lost miserably to Matt Connolly?" (That as in last year's Congressional primary).

And this: "We in this country are sick of self-centered politicians and people who look on public service as their own 'opportunity' as you told me that day was the reason why you were running."

I think it's safe to say that Geissinger, who presumably plans to seek a second term on county council so he can run for Congress again, is in some deep shit. As a Democrat, I don't care who Republicans pick to lead their party. That is their call. But I do care when a member of county council appears to have broken his word. I do care when that same member of Council is rather effectively painted as an opportunist.

Could this be a big misunderstanding? I expect to get Geissinger's side of the story later this week. Though he is very condescending to others, he has always been honest with me. But so have the Snovers. He is a deeply religious person. But so are the Snovers.
Posted by Bernie O'Hare at 2/07/2017 03:13:00 AM

R supervoter here. I'm not voting for Geissinger for anything. Nor am I voting for Ferraro because of her loyalty to a convicted felon. Some of us are just learning of her sleeze and are not OK with it.

Bathroom comment is gross. Most probably someone told you when you were in the 4th grade that you were funny and you believed it and never forgot it. Unfortunately it isn't so. Get over it you clown.

Is this the same Lee Snover that lives in the Mountains, from Fort Dix, and uses a dog pic on a FB account?

As a millennial R-voter looking in, the pettiness among local baby-boomers in all forms of government, from township supervisors on up, is ridiculous. Get over yourselves already. There is life in the Lehigh Valley beyond the 60 year old agitated white man in power.

Sure they do. The moral high ground is held by those who keep their word.

6:37, You are actually a D supervoter and are trying to slime Peg over something everyone knows and no one cares about. She is friends with a man who was convicted in 1987, 20 years ago, and who has paid his price. She is also friends with me, a person whose license to practice law was taken away 22 years ago. Under your twisted thinking, no one can ever be redeemed and everyone who broke the law must be shunned forever.

Bernie,
7:57 am is either a allentownian fermented blue koolaid drinker or one of the many sexaully deficient working in the triboro's cesspool created by design to divert and dillude! Than again it could be a politic log roller within the cesspool that is a operative for the death eaters team because it will not put its name to its comments!

No, I am an R supervoter, indeed. Never liked Geissinger or Sabatine. And I've voted for Ferraro twice. Never again. You just don't like your friends being called out on their sleazy relationships. This is worse than when she wasted county taxpayers' money on a higher bid for by her local ambulance company friends. I wonder which crook she was deferring to on that one. You're not a convicted felon and you have no money to buy politicians like her. Apples and oranges. I appreciate your raising awareness of her tawdry relationship - albeit in an attempt to sweep it under the rug as old news.

Uh huh. You voted for her twice knowing that she took care of her local ambulance friends. And it is old news. You must have been asleep for the last 20 years.

Her Facebook rants are crazy. We love Glenn, he is a goof man. Ferraro has sold out people in the past and would do it again for a vote or a dollar.

The insiders like Snover are just angry old women and men.

Does it seem unseemly for him to get involved in this political squabble given his position?

Agreed. He is a goof.

"Does it seem unseemly"

What's unseemly to me is that there is evidence that Geissinger broke his word. A man with nothings is till a rich man if he has his honor.

"Is this the same Lee Snover that lives in the Mountains, from Fort Dix, and uses a dog pic on a FB account?"

I have no idea if she has a separate F/B account, which might be her public facebook page bc most people know her as "Lee" when her fist name is actually Gloria.

Most of these local yocal party hack types from both parties eventually get stars in there eyes the longer they are involved. Exceptions sure. . . But mostly the local parties serve no purpose but to polarize and entrench the us vs. them team sports mentality that's basically ripping the country apart. Are there some fundamental philosophical disagreements? Sure. By and large though there is much more common ground then either of the party structures want you to believe. Otherwise they lose their purpose. Which is to divide us.

The only thing we log cabin Republicans care about is that sweet glass of Butt pounding Marine, Toni Simini. He puts the log in log cabin, ask Abe Lincoln. He is the hottest man love next to the Mediterranean manslab Gentleman Jim Gregory!

You kissed and made up after sliming peg for thwarting your man crush from being elected pres? Are those attacks still floating in cyberspace for all time and for all to see? Or do you delete the personal attacks as you profess to forgive the transgressions of others and seek the same for yourself?

4:12, You seem to be caught up in hatred of me instead of a willingness to discuss this issue. I do not delete past criticisms. I do not like how Peg treated Ron and made my views known at the time. I also disagree with many of her votes. But I have actually known her a long time. She is a decent person, which really seems to annoy the hell out of you. It is hard to stay mad at Peg.

Love it when R's fight among themselves..thought only the D's did it. Maybe they are human after all.

Lee Snover will get hers. Her and Trump will go down soon.

Goodness, it sounds like the popular kids are feuding.

People only have as much power as you are willing to give them.

George Washington warned us completely about the threat political parties pose to our nation.... we are all staring the results right in the face.