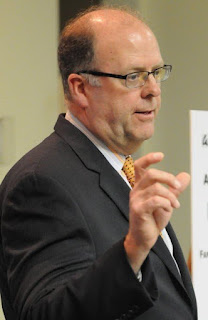 Back in September, I told you CACLV Executive Director Alan Jennings had proposed a Neighborhood Partnership Program (NPP) that will include Slate Belt boroughs Pen Argyl, Bangor, Portland and Wind Gap. If approved,it would be the first intermunicipal neighborhood partnership program in the state.

Jennings had received the blessing of Pennsylvania's Department of Community and Economic Development (DCED),and Secretary Dennis Davin will make it official in a news conference on Thursday, 1:30 pm, at Bangor Trust Brewing.

How will a Neighborhood Partnership Program (NPP) help? It is a tax credit program offered by the state DCED.

Here's how it works. A business making a contribution of at least $50,000 per year for five years can get a state tax credit of up to 80%. This, coupled with a federal charitable deduction, means that it only loses 13 cents on every dollar contributed.


Corporate partners Merchants Bank of Bangor, Waste Management, ESSA Bank & Trust, and Lafayette Ambassador Bank have pledged a total of $775,000 to this project. In addition, the Northampton County Department of Community and Economic Development has committed $20,000 in federal Community Development Block Grant funding and $50,000 in Community Investment Partnership Program funding in the first year of the project.


Money would be spent on facades in central business districts. It will also be allocated to housing rehab projects and municipal park improvements. Focus in the first year will be Bangor. In the second, it will be Portland, the Cancun of the Lehigh Valley.
Posted by Bernie O'Hare at 2/01/2017 12:00:00 AM

Are there any affordable housing projects in these communities?

Never fear - the Green Knights have a solution to poverty in the Slate Belt Boroughs. The Heat Recovery Center, otherwise known as the Synagro shit bakery. It will provide 12 poor paying jobs to starving residents, who will have to all smell crap 24/7 a day. Problem... solved?

I am skeptical of this program. Corporate control of the boro's is not such a great thing. IF..they listen to the residents and do what is actually needed..I will stand up and cheer. Lip stick on a pig and band aids are not what the area requires. Serious initiatives only...please. We are not the Lehigh Valley..we are the Slate Belt and we do have pride in our communities already.

Where ever Jennings goes, so does progress and social norms go! Watch out, if this leftist gets a hold in your community, the community will pay.

Affordable housing? Yes..federally subsidized housing abounds. We are awash in slumlords who don't care who they rent to as long as the checks keep coming. Bangor housing ratio is 50/50..owned and rentals. You figure it out.

Waste Management is a corporate partner? Really? They own the worst possible community negative issue..a landfill and a proposed crap drying factory. Their money is tainted and frankly..it stinks. Ask anyone who lives within 5 miles of that putrid dump site. And the people are supposed to be excited about this regional program with them getting a tax break on top of the greed they already aspire to? BS!

I live within 5 miles of the landfill. They (WM) do not own a proposed crap drying factory. Synagro is attempting to build and operate such a plant. I can smell the landfill as I suppose do most of the residents. I have toured the landfill and learned a lot. We all produce garbage, which must go somewhere. This landfill follows all regulations which are required. Most people have no idea. The borough of Pen Argyl has a symbiotic relationship with the landfill. We get free garbage pick-up and the landfill also has benefited the finances of the borough. There are also yearly road projects which most other municipalities are unable to do which are related to the flow of revenue generated by the landfill. There are also environmental benefits as well. It is in the best interest of WM to follow the laws and regulations which are imposed on this industry. They have attempted to be a good corporate neighbor. Knowing factual information about the landfill, WM, Synagro, the people involved, the GKEDC facility, the testing of liquid sludge and biosolids, etc... does not mean that I am in favor of the Synagro plant being built here. Business is business. Knowledge is power. The attitude that WM is the "enemy", big business must be "greedy" is not productive and contributes to the breakdown of public discourse and civility. It does nothing to solve problems. IMHO. Bernie, with the photo of the "Portland hot tub", are you making fun of the slate belt?

A man must add bleach and boil his water before drinking or suffer the carsinogins lifelong effects.

This guy is shady. He broke Northampton county law to hire a guy who gave him contracts. The same guy who was in charge of the Department that gave that foster girl killer a job promotion.

I reiterate..WM is no friend of the SB community. Money can't and won't buy our loyalty or acceptance of further issues. We live here..WM is a giant corporation who does not live here. Stop defending...the enemy of the region. Our quality of life is more important than biosolid production and more dumping from one end of the SB to the other. STOP DUMPNG ON US!

I assume you are referring to my previous comments when you write "Stop defending...the enemy of the region." Nowhere in my comments do I defend WM. I simply stated information available to all, which is true. Pretending the truth doesn't exist doesn't make it disappear. WM is not an "enemy". There are great local folks who work there and support families and the local economy. They are people. They are not an enemy. I do have many concerns regarding the proposed Synagro plant. My wife and I will tour the Philadelphia facility next week. Perhaps our goal is the same. I do not agree with the hateful rhetoric and demonetization of good people. This us vs. them mentality is divisive. Just because I am not doing, thinking or saying the same things you may doesn't mean that I am part of the "other side". Tolerance?

Corporations are not people..despite what has been foisted upon us by the courts. Talk to the people who actually live in lower Pen Argyl and see what they have to say because obviously..you do not live on George St. or Williams St. Come down out of your white ivory tower and listen to the real people..not a monstrous greedy corporation. Power to the real people!

I live on Williams St. and the people who work for the landfill are indeed real people, just like you. I have met them and spoken to them. They are nice folks with families. They are local folks. I am a real person. I do not live in a "white ivory tower". I live in a half a double which is over 100 years old. I have lived here for 11 years. I have raised my family here. I love Pen Argyl and actively work toward its' betterment. I have not posted anything which is untrue. I am not the enemy. I have shown no ill will towards anyone in these posts. Why do you, whoever you may be, spew such hate. Especially toward those you do not know, just because they do not think just like you do. I try to treat others as I would like to be treated. Why post anonymously? Perhaps you should focus on your goal instead of attacking me or those who think differently.

11:24, if you want to take issue with Jeff, you should ID yourself. If you cant't do that, leave him alone.

If expressing my opinion is hate..so be it sir. Your neighbors feel otherwise and so do the majority of people in the region. There is no qualifier that says I must ID myself so please stop that line. I made no hateful remark toward you that I can see but if Bernie wants to zap this comment..so be it also.

You accused him of living in a white ivory tower and talked about where he lives. When you get personal like that with a reader who does identify himself, you should have enough respect for him to say who you are and where you live, too. Your failure to do so diminishes both you and your argument. Incidentally, this post had nothing to do with the proposed shit bakery. But since you hate Waste Management money, please contact Alan Jennings and provide an alternative source.

Who do you work for and where do you live?

I do not work for Waste Management. You just cannot believe that someone can be a regular old person, just as you are, but not think as you do and still have concerns which would not put him in the pro Synagro camp. I do not understand your mindset. I really feel badly that you seem to be so full of angst toward people whom you do not know simply because they do not think as you do. How strange. I'm done. I wish you well.

To those that would bully someone for commenting his opinion is disgraceful. We all have different opinions in life, it does not entitle any of us to be disrespectful to one another. Attacking someone for their opinion gets you nowhere. Work peacefully and work toward a common goal but do so respectfully. Mr. Fox, thank you for your thoughts on these topics and continuing to better the community in a positive and peaceful way.