NorCo GOP Has County Council Slate, Dems Working On It 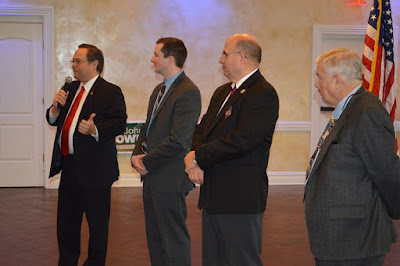 On Saturday, at the Bluein BethlehemTownship, Northampton County's GOP hosted its annual Lincoln Day breakfast for about 200 people.The featured speaker was Scott Wagner, who is running for Governor. Lincoln himself believed in malice towards none and charity for all, and this breakfast has traditionally included Democrats. But not this time. According to party boss Lee Snover, the event sold out early, so Democrats were barred. Even magisterial candidate Vivian Zumas, whose uncle owns the restaurant, was turned away. .

It appears NorCo Council has its slate of five GOP candidates. Glenn Geissinger, who spent half of last year running for Congress, thinks he's a shoe-in. Seth Vaughn, known mostly for absences that included the Budget hearing in which Council members proposed their own amendments, is running. He told me that in December and said he'd win, too, because "Nobody cares" that he missed Council's most important meeting of the year. Peg Ferraro (not pictured above) and Hayden Phillips are also seeking another four years. Though he's said nothing publicly, Ron Angle stood with the Council candidates and is circulating. 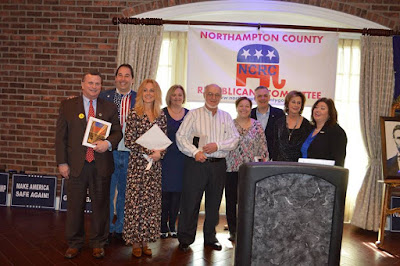 During this breakfast, Snover presented awards to worker bees who helped ensure that NorCo voted for Trump. This includes West Easton's Tricia Mezzacappa. She may be an adjudicated defamer with summary convictions for harassing West Easton officials. She apparently is a tireless worker.

On Monday and Tuesday nights, Republicans had well-attended petition-signing parties. They are pumped up

Democrats, whom I would expect to be energized in opposition to a so-called President who lies several times daily, are having a rough time finding five candidates.Peter Melan, Ron Heckman, Lori Vargo Heffner and an unknown named Tara Zrinsky are reportedly circulating. but the county party has no bench and is apparently having a hard time. finding a fifth candidate. Some suggest that party boss Matt Munsey circulate his own petition, hoping he can eventually recruit someone and step aside.
Posted by Bernie O'Hare at 2/22/2017 12:00:00 AM

Is that Geissinger with the microphone? If it is he ate too many chicken dinners on the campaign trail. That belly looks pregnant.

How did you get in if the dinner was sold out to Republicans?

Maybe the teabaggers can give us another 10% tax increase. Not sure what else of consequence these people have accomplished.

I could of did without the anti-Trump bashing, but it sickens me to see these useless ---holes running again. I am an independent voter, thus no partisanship holds me captive, however, to re-elect these bunch of losers, is a blight to good government. Increase taxes, [when there is no need], don't show up very important meetings and to blindly support their non-transparent vindictive republican executive, is not good government and the taxpayer's of NC deserve a lot better!

She is still doing the same things that got her in trouble in the first place, while Asher's conviction is 25 yo.

Thanks.I had the namewrong,which is why Iwas unable to find anything out. It is Zrinski.

Tara is an anti-pipeline/fracking extremist, who if she starts yapping about that in a campaign, will alienate most people.

Isn't Ron Heckman already collecting a county pension? Will he be suspending it 4 years if elected?

NCACC..sorry. Tara is prof. of world religions and not a crack pot of any sort. She would be a breath of fresh air on county council and she is very well educated on many subjects and yes..fracking does lead to earthquakes..see Oklahoma for the proof.

Not allowing "D" candidates in is BS. How many R's will cross file as D's. Suck it up Lee.

"Isn't Ron Heckman already collecting a county pension? Will he be suspending it 4 years if elected?"

Was that an issue with Seyfried or Stoffa?

When the republicans have no real issues to run on they go personal attacks. What else is new. You can already tell Ron Angle is involved.

General Lee refunded a cross-filing "D's" admission fee (well before it allegedly sold out) because the candidate wasn't a registered "R". She never reasoned it was because it was sold out. So much for introducing "all" the candidates who intend on running as an "R", and those candidates who were eager to meet republicans and announce their intent on running.

She is an extremist right wing like most of the party has become. It will get worse now that Ron Angle is leading the county team. Watch for all the underhanded personal attacks. It is his specialty and the entire party is now represented by him.

Any group that gives the Mezz an award is suspect.