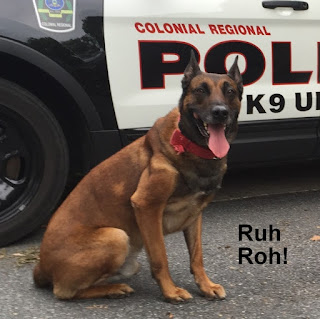 Cody Hendershot, a Colonial Regional Police Officer and K-9 handler is running fir what he calls "the People's Court." He's seeking the slate belt judgeship currently being served by Magisterial District Judge Alicia Zito. This includes Bangor, East Bangor and Pen Argyl, where everyone is related to everyone, except for the Bastard, Mark Thatcher. It includes Portland, the Cancun of the Lehigh Valley, where Bob Cartwright is currently writing his memoirs and is on page 2. There's the Mount Bethels, where Ron Angle recently declared himself emperor and is trying to patent a sludge-propelled car. There's also Washington Township, home of the Good Mark, who is preparing for Spring. Finally, there's Roseto, where everyone lives past 150. Some say it's the Mediterranean diet, but I personally think they're all vampires.

The magisterial district judge is the person on the front lines of justice For years, it was Griggy. he was normal when he started.Then his hair turned orange and he dropped about a foot in height, probably because the vampires have been picking away over the years. It's certainly the most colorful district in the Lehigh Valley, if not the state.

Anyone seeking this position should be involuntarily committed.

Henershot's partner Eyra is a Belgian Malinois and thinks this position is beneath him.

"Ruh, roh," he said when he learned that his human partner was running for judge, except he said it in a French accent.

He thinks he'll be a tipstaff.

Hendershot, a Republican, plans to cross-file on both the Republican and Democratic ballots.

“District Courts are truly the ‘People’s Court’ of Pennsylvania – a place citizens can go to have their grievances heard without need for costly attorneys and with common sense provided in an equal dose with the law,” Hendershot said. “As District Judge, I will bring that common sense – along with an understanding of the law and of our community’s concerns developed from a professional career in law enforcement – to the bench to provide honest and fair justice.”

Hendershot holds a Bachelor’s Degree in Criminal Justice from Moravian College and has spent his professional life in law enforcement, first as a Lehigh County Correctional Officer and for nearly a decade as a Police Officer with the Colonial Regional Police Department. Today, he is a member of the Northampton County Drug Task Force as well as a K-9 Handler, a role in which he interacts with police departments from across the Lehigh Valley. Hendershot has deep experience in our courts, having testified in Magisterial District Court and in the Court of Common Pleas as a Police Officer.

Magisterial District Judges in Pennsylvania are not required to be attorneys; instead, they must successfully complete a rigorous training and education program administered by the Minor Judiciary Education Board and then be certified by the Administrative Office of Pennsylvania Courts.

"Too often, candidates for this office will try to convince voters that a law degree is a necessity when actually it is the opposite of what was intended for these courts," said Hendershot. "What's a necessity is a deep connection to the community, common sense, and a proven ability to hear all sides of a disagreement with a sense of fairness. None of those things are guaranteed with a law degree."

Hendershot pledges to serve full-time as District Judge if elected, and has put forth the following platform outlining his priorities if elected:

“As District Judge, I will work with law enforcement and community leaders to help keep our neighborhoods safe and prevent crime, especially when it comes to addressing the rising opioid epidemic,” said Hendershot. “As a lifelong resident, volunteer in our community and taxpayer, I understand what our families want in their District Judge, and will focus on those priorities while running a court that is fair, effective and efficient to save tax dollars.”

Like his two opponents, Hendershot is a lifelong resident of Northampton County. He graduated from Bangor High School and then worked his way through Moravian College. His parents, Bruce and Phillina (nee Falcone), have lived and worked in the local community for decades, and his family has opened their hearts and homes to foster children in Northampton County for over 30 years. Cody and his wife Jennifer live in Lower Mount Bethel where they are raising their two sons, Joshua and Daniel.

"My goal as District Judge is to do more than keep our neighborhoods safe and resolve disputes justly, with integrity and accountability, it is to come down from the bench and make our community a stronger, better place for all of us," said Hendershot. " I believe that to provide the best judgments for citizens requires really knowing the people you are serving, and being active in the community is how that happens."
Posted by Bernie O'Hare at 2/08/2017 12:00:00 AM

Sad to see the taxpayers invested so much in the dog and this guys training when he was a politician all along.
He does not have a clue or a prayer at getting elected and is way to full of himself. The bottom of the feeders on this election seat for sure is Cody. Cody stick with police work your less apt to have people see what a fool you are there and the dog wont let you down like you did Colonial Regional and the taxpayers when they spent all this money on your training AND THE DOG ETC. Why did you ell them you wanted to be a DJ when they were hiring?
Community aad taxpayers got screwed over by this guy-

Alicia Zito the odds on favorite. Try to catch her.

Bernie,
Judging from the look in that dogs eyes he or she would be the making of a more superior. The decree coming from a dog will have more teeth!

So is RUH Ro running or the goof Cody? If its the dog? He has my vote- If its Cody? ZITO ALL THE WAY BABY!