Morganelli Forgets to Punch In 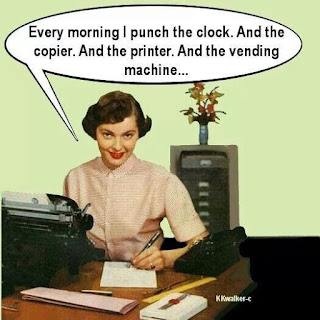 On Thursday, either NorCo HR Director Amy Trapp or her husband posted this comment on my blog about timeclocks.

Is this a serious article? Are you kidding me!? Hourly employees don't want to use a time clock? And there is some rule, law or document somewhere stating that hourly employees don't have to use a time clock? Seems to me that anyone putting in an honest day's work wouldn't have a problem punching in or out. As a taxpayer in Northampton county I'm glad that there will be proof of an employee being at work. These entitled spoiled brat government employees need to get on board. If they don't want to punch a clock at the Northampton county courthouse let them quit and punch a clock elsewhere. Hey, here's an idea. Don't punch the time clock and when there's no money in your account on pay day, bet they'll start punching a time clock! And as for Morganelli maybe he has more important things to be concerned about. And to the person who made the idiotic statement " it is dehumanizing" get a grip! Millions of people punch in and out every day!

That comment was meant to be anonymous, but either Amy or her husband pushed the "Publish" button without thinking. Though the comment was deleted, I get an email notification of every comment posted, so I received it right away. Trapp claimed her husband was the culprit, not her. She refused to apologize for his (or her) slur at the county workforce. She also refused to apologize for the slur at Morganelli.

That evening, Morganelli was contacted by Palmer police concerning a homicide, and worked with officers until late that night. The next day, a Friday, Morganelli was at the courthouse by 8 am. He put in a full day, but joked he forgot to punch in.

The Brown/Allen/Trapp team has to go. They demolished worker's morale and have infused the workforce with venom that shows up in County services.

Do the Trapp's live in Norco?

Is Trapp using a time clock? If not, why not? If she is, you should file a right to know request for the records.

8:16, Yes, This cabinet official is a county resident.

These time clocks are only as good as those enforcing them. Pat Himmelwright has ignored caseworkers who voiced concerns that people were fraudently documenting their time. Administration will continue to provide protection for some, and use the time clock to discipline others. I have witnessed this first hand without said time clocks.
Regarding Amy Trapp, this blog illustrates the Amy I experienced. This is the character she showed me when I went to Human Resources for assistance. I suspected strongly she was bashing me anonymously on the prior blog when I publicly exposed her and the issues in CYF.
Overall, my experience is that staff have been very accountable with their time. And there are a handful who are not trustworthy who should be dealt with accordingly.
Some years ago a very wise supervisor explained to me that some administrations will heavily focus on nonsense such as this because other issues are much too difficult to tackle and this gives appearance as though they are accomplishing something. When we were at Wolf, there was a time period when the Human Services director could only focus on who parked where, and nothing else was accomplished! The wise supervisor explained to me, "this is what makes admin feel they are working on something." I always got a good laugh about this statement, but it appears more and more to be spot on!
MBJ

Ask anyone around courthouse HR is known for putting "the human" in human resources. Instead of sticking up for the worker they look for ways to demoralize them more. Amy Trapp needs to worry about her own department and how it is run before working on petty issues that supervisors can handle in their own departments.

1044---demoralize is a great description, thank you! Rather than address a man in power who is clearly violating numerous county policies, or an assistant administrator and others, who blatantly engages in discriminatory practice, she attempted to demoralize me.
She has stated numerous times behind my back that I am a disgruntled employee.
I am disgruntled because she demoralized me and ignored the above issues and other things including the demoralization of clients.
And Allison Frantz demoralized staff for plugging in a microwave. Remember my wise supervisor? A pattern?
MBJ

If you wish to attack another reader, sign your name.

227 and 248, I welcome your criticism, and you are entitled to your opinion. May I please ask of your opinion to ignorance of mistreatment of families, ignorance to time stealing, ignorance to men in power behaving inappropriately with females and allowing those females to affect workers and families, and now the human resource director publicly berating the County work force?
The assistant administrator turned blind eyes to time stealing with public funds.
The human resource director turned blind eyes to a male administrator exhibiting extremely disgraceful behavior with casework staff.
Kevin Dolan, as the department director has behaved in disgraceful ways. He should have consequences, as other casework staff are surely experiences consequences for much less.

Where was there criticism of anyone? My particular statement was that unless someone has actually had the responsibility of actually running a large organization like the entire human series department it is hard to imagine what is all involved. A comment was made about someone being worried about parking, I don't know who or why but maybe there was a real problem that not all staff was aware.

The point is the larger the operation the more involved things can be and something that seems meaningless in one person's world is not in the larger picture. Also most of the appointed officials are responsible to many groups and people. We all answer to someone or others. A Department Director answers to the Executive, county council and the public as well as their staff.

If that is attacking someone, than this conversation has an obvious objective that goes beyond sharing thoughts and perspective's.

Also 1044, I met with Amy Trapp upon her beginning employment with Northampton County and she ended a meeting with me stating that she must give attention to her staff to take care of things as the new HR director. From comments on the blog, it appears she has not engaged well with her employees either. I have had very good experiences with Courtney K. She appears very knowledgeable, is readily available, and extremely helpful-----and I must add very courteous and respectful, very different from Amy Trapp. Amy acted as though she was much better than me. She even agreed discriminatory practices were taking place but she refused to do anything about it. She was critical that I actually had conversations with fellow co-workers regarding the discrimination. Additionally,she was quick to criticize those in Human Resources that came before her.
MBJ

One thing she did that was very helpful was she got rid of the HR Queen Bess. They were a pain in the butt for years.

Bernie, why are allowing MBJ spout off at will and deleting her critics? She attacks her supervisors and HR staff who are not in a position to fight back. Enough is enough!!

She identifies herself. CYF, HS and HR are unable to discuss sensitive matters concerning children or employees, but there is no reason on earth why employees there cannot respond to nearly all of her accusations. All too often, this inability to talk is just a convenient excuse. She identifies herself. You do not. But I will say this. Instead of addressing her remarks to me, she needs to make them known at a council meeting, specifically the HS meeting.

Agreed. But her supervisors cannot really discuss her shortcomings on a public blog without violating personnel rules. You know that. So they are handcuffed to address her complaints, which are her perceptions only. And if she is essentially a problem employee, she could be fabricating these accusations to rationalize her own misgivings.

They don'y have to discuss her at all. They can discuss the subject of some of her complaints without violating any confidentiality for children or employees. And I am not going to allow wyou ton continue posting until you identify yourself.

Mary Beth, I am not going to allow you to post here anonymously or using mere initials. Sign your comments. Better yet, take out a profile and use it. I want to make sure every comment coming from you is actually you. I am not going to accept initials from you. Slso, this is am=bout time clocks and Amy Trapp. If you cannot stick to the subject, do not comment.