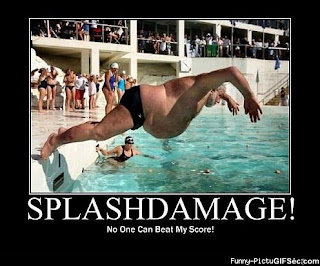 Yesterday, I told you about  Allentown's Cedar Beach pool, which is now a year behind schedule and $681,000 over budget. This pool was designed by Bethlehem architectural firm Spillman-Farmer. Partner Dan Harrigan knows a little bit about swimming pools  He won the 1975 Pan American games in the 200m backstroke. He also took a bronze medal for the same event in the 1976 Olympics. But Allentown Mayor Edwin "Fed Ed" Pawlowski is pushing a prestigious and local architectural firm away to coddle with MidAtlantic, a General Contractor from Trenton, New Jersey. He also hired the General Contractor's engineer, Frank Clark, to act as an "independent" intermediary while receiving paychecks both from the General Contractor and from the City.

Whitehall Mayor Ed Hozza attempted to defend MidAtlantic and Clark yesterday. He points out that last year, MidAtlantic worked on at least four pool projects in Pennsylvania. The Cranberry Township Water Park addition (North of Pittsburgh), the Fleetwood Borough Pool, The City of Allentown Cedar Beach Pool and the Whitehall Township Parkview Hokendauqua pool. Hozza unwittingly explains what was wrong. MidAtlantic was behind everywhere because it was tying to do too much at once. In addition to being behind schedule in Whitehall, I know Fleetwood was very upset by the delays.

According to Fleetwood's Borough Council minutes, "The contractor is in breach of contract." The Borough had to pay Topton so that residents with passes could use their pool. Their pool did open in late June.

Allentown was upset, too..

On 4/11/16, Parks Director Lindsay Taylor emailed MidAtlantic to say, "I have seen no activity at either pool and that is not what I expected. I expected the project to be moving forward and do not see it as my role as having to oversee this. If you believe this to be my role, at this point, nobody will like it. Please provide us with a project schedule with milestones that will take this project through to completion. If you need anything yet from the City, please tell me ASAP. If there is activity going on behind the scenes and you will be at the sites Monday, please let us know so that we can feel as though we are finally moving forward."

I see no answer to this email, and no schedule.

On May 25, 2016, Allentown was notified by Superior Pool Products that it had a claim against MidAtlantic for services and materials at the site, and it threatened to file a mechanic's lien. "We need to resolve this ASAP," said Purchasing Agent Beth Ann Strohl in an email to interested parties. "If MidAtlantic is not paying their subs, then we need to call on their bonds."

So far as I know, no lien was ever filed.

You are going to have a field day on this topic. Conflicts of interest everywhere and a local firm getting the blame.

The City wrote the contract for the contractor making him responsible for Permits but blames the other guy when they don't have them.

Just another story from the Queen City.

Curious as to whether this is the same Frank Clark who worked for Keystone Engineering and was Twp engineer in Whitehall.

This is the sad story of want to be mayor for life Ed Pawlwoski. Nothing makes sense [i.e. Michael Walker] and everything is convoluted. Only his very dark side knows. Yet, there will be uninformed half-wits voting for him in the May primary if not indicted. The plethora of democratic candidates almost ensures he will be a top contender. This is another sad chapter that the remaining good citizens of Allentown do not need!

OK, let me get this straight: if someone was an Olympic swimmer 40+ years ago, that makes them know "...a little bit about pool..." design/engineering? I've had a driver's license for more than 50 years, yet I don't know "...a little bit..." about automotive engineering.
What kind of wacky-weed to they have in Nazareth? And it's quite clear to anyone that Spillman people are responding to your statements with all the inside information being published.

Bernie,
like someoneelse just wrote about this contractual writtings, the city wrote the contracts and contractors are expected to follow the dictations in the print? Seems to me that this is another fine example of the grant grab get to give campaign donations, quid pro qwo. I give you and you in return give me!
The over billing is a planned tactik from way before any signators signed to enter into said contract with administration, ie fed ed. This deal was probably struct on one of the many desposible oboma burner phones this man posesses!
Back in the day upon itZ arrival there is a tail of travel of the whole administration to all expense paid vacation island in the carribians?
REpublican redd
humanist by design

I'd like to see a thorough investigation of connections between Pawlowski and the construction contractor and its owner. According to what has been posted on this site, the city required that the contractor had to show they had successfully completed 5 public pool projects, but the contractor could not, and received a waiver.

It is common for municipalities to be forced to hire a construction contractor who does not have a great history because they are the low bidder. However, if the city waived its requirements in order to hire MidAtlantic, that smells. Also, the fact that no one in the city was pressuring the contractor to do the work on time also smells. I suspect the city staffers were told to not be strict in enforcement of the contract or in questioning the huge additional expenses.

"Curious as to whether this is the same Frank Clark who worked for Keystone Engineering and was Twp engineer in Whitehall."

8:03, You are twisting what I said,which is dishonest. What I said is that Spillman-Farmer's Dan Harrigan knows a little bit about swimming pools bc he was an Olympics wimmer. He knows a great deal about their design bc he is an architect.

7:43, There were no delays from Spillman-Farmer. That started once the bid was awarded to the GC.

If you can't seal plans with your name, you shouldn't be giving out engineering advice. I've never understood why townships like Whitehall don't insist on having a real PE. He may be a great guy and know his stuff but if something goes wrong you don't want to have to say "Well no, no he's not a registered professional engineer, Mr. Plaintiff's Attorney."

They don't have a solicitor who didn't pass the bar, do they?

This doesn't sound like it's meat for the FBI case but it certainly is terrible all by itself. There's no way the client should have had to hire a fourth party to make the consultants and contractors play nice. It's hard to figure out whether this all started because Mid Atlantic broke something it shouldn't have, didn't want to eat the cost, so they went about some crazy scheme to get out of it and buy them some time.

10:54 Bernie, sorry, but an architect isn't a structural engineer. You criticize this Clark person because he's not licensed but you're twisting the truth saying that an architect knows as much, if not more, as an engineer, licensed or not. You can't have it both ways and clearly there's an agenda here to somehow exonerate Spillman Farmer for their performance and hang KCE out to dry. Is it somehow "better" to have a licensed person perform your work? Maybe, but to say anyone who's not licensed can't do any engineering is dishonest. Industry has many people with the title of "engineer" and many do not have their Professional Engineer's license. Hell, the City had a "Manager of Engineering" for years who was not licensed but could run rings around many so-called licensed engineers.
Doesn't fit into your narrative, I know, but that's reality, like it or not.

1:56 - you are crazy. There has only been a handful of pool projects this size in the Lehigh valley. KCE did none.

10:54 - he had a conflict. That's the bigger issue. I'm told there are over 1,000 emails floating around city hall with some pretty bad information.

I wouldn't consider any of this insider information. Seems like a lot of people have access to these emails now. Better part is that the city redacted certain emails but yet they show up clear as day on other threads. Oops.

10:54 - Spillman didn't have a chance. You should read the emails.
Better yet. Call Springfield Township, NJ and ask them about their pool. Call up the sub contractors on that job too. Same story. Engineer had to get removed in order for work to commence at an increased price. Before Clark showed up on the job the city was having meeting after meeting to discuss why the specifications were being ignored.

7:11
Read the descriptions on those projects. Only one the size of Cedar completed but only after the engineer had to be kicked off the job before he would proceed. Lol

Admittedly off topic, I'm hearing that some city employees are working on Fed Ed's campaign which I'm pretty sure is a violation of some
code or whatever.

If they are doing so on the city dime, yes.